The museum tracks the history of flight in Texas and beyond

Written by Tandem Web Co, Photographs by Will van Overbeek | From the May 2018 issue | Updated: November 5, 2018 | Filed Under: TRAVEL 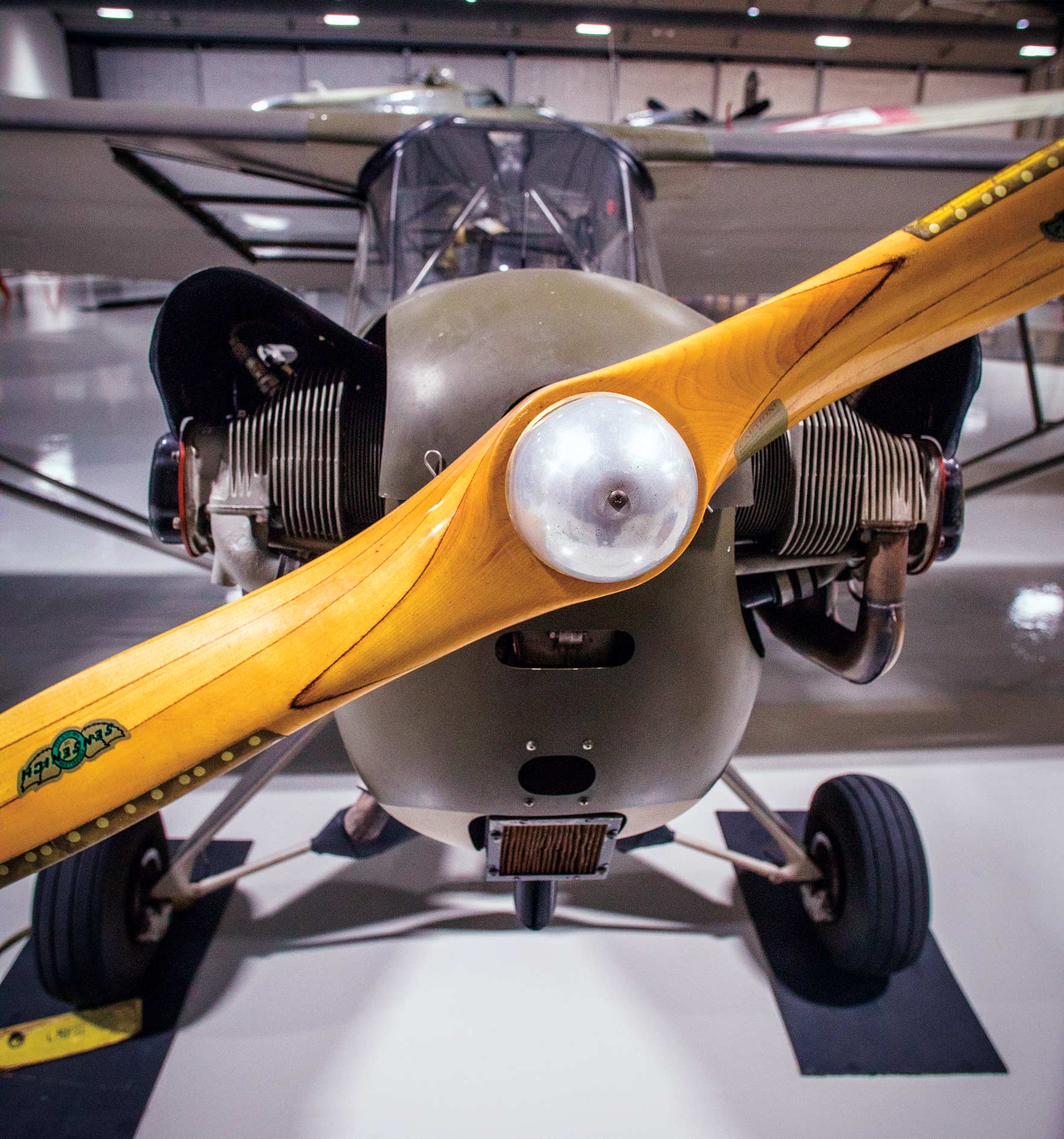 On a clear Saturday morning, I find myself perched in the glass nose cone of a World War II bomber, barreling through the sky at about 200 miles per hour.

The roar of the engines fills my ears as the two pilots, seated behind me, guide the plane over my hometown of La Porte. From this vantage point, some 1,500 feet in the air, I gaze down upon a patchwork landscape of refineries divided by the sinuous path of the Houston Ship Channel. The plane banks to the left, revealing a familiar landmark: the limestone pillar of the San Jacinto Monument. As we pass over its crowning star, I catch a glimpse of the Battleship Texas, docked nearby.

This incredible perspective comes courtesy of the Lone Star Flight Museum, which offers such “Flight Experiences” from its home at Ellington Airport in southeast Houston. The museum opened last September, unveiling a 130,000-square-foot concrete facility with a soaring arched atrium at its center and vast hangars measuring about 30,000 square feet on either side. The museum was originally located at Scholes Field in Galveston, but damages from Hurricane Ike in 2008 prompted directors to rebuild inland—ultimately a nine-year, $38 million project.

With galleries and vintage planes, the Lone Star Flight Museum explores the history of and technology of flight.

With its informative galleries and collection of vintage planes, the Lone Star Flight Museum explores the history and technology of flight stretching well beyond Texas. Museum President Larry Gregory, who happened to be the captain of my bomber flight, says the museum has plenty to offer for history buffs, but its greater focus is on the technology that makes flight possible and on the innovators who’ve driven its development and evolution. 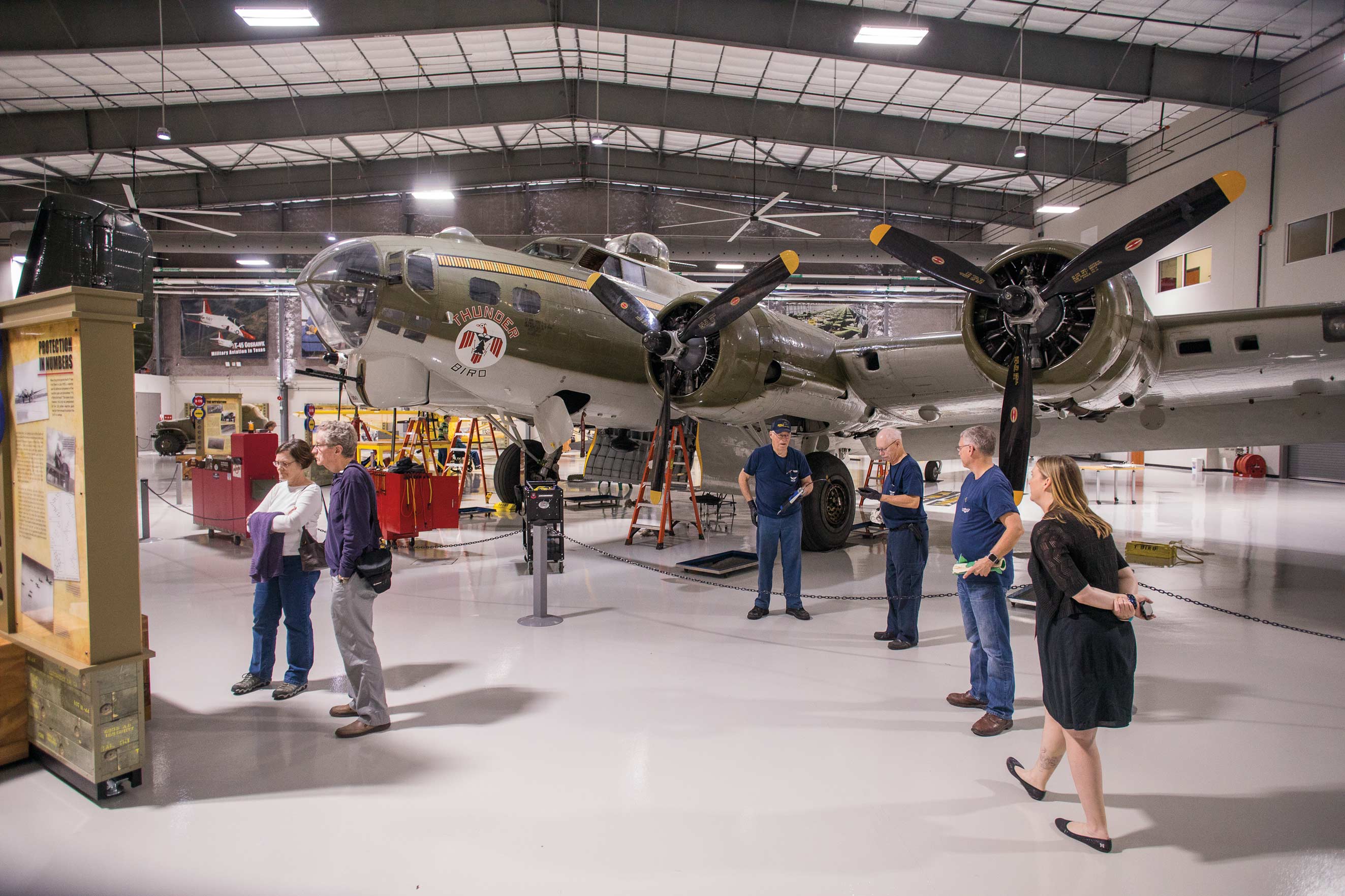 On display in the museum’s Waltrip Hangar, the Boeing B-17 Flying Fortress is also available for a ticketed Flight Experience.

“We’re not so much trying to teach WWII, but how individuals shaped things,” Gregory says. “We give people a perspective on what it took to design and build these airplanes, and how they changed our culture by providing opportunities for women and minorities, like the WASPs [Women Airforce Service Pilots] and the African American Tuskegee Airmen, to perform outside the  stereotypical norms of their time.”

The vintage airplanes on display at the Lone Star Flight Museum tell stories just as big and expansive as the two 30,000-square-foot hangars that house the aircraft.

A restored OY-1 Sentinel with a wooden propeller sustained damage from enemy fire over Iwo Jima in 1945. A 1944 Grumman F6F-3 Hellcat, with wings that fold up to conserve space on the flight deck of an aircraft carrier, played an important role in the war as a Navy fighter.

A handful are on loan from the Vietnam War Flight Museum: a 1952 Douglas AD-1 Skyraider, first employed as a fighter in the Korean War; a glossy red Polish-made Soviet MiG-17F; and a Bell TAH-1P Cobra attack helicopter, bristling with guns. The permanent collection also highlights non-military planes such as civilian flyers and even an early commercial airliner—a gleaming Douglas DC-3A, originally built in 1940 for American Airlines.

One of the two main exhibition halls, the Texas Aviation Heritage Gallery spotlights individuals who have made significant contributions to the field. The educational displays walk visitors through the history of flight, covering early trailblazers such as Katherine Stinson, a stunt pilot who worked out of San Antonio and in 1912 became the fourth woman in the United States to earn a pilot’s license; the establishment of military airfields across the state, spurred by World War I; and the role of Texas in the air-travel industry and in NASA’s space explorations. This gallery also includes the Texas Aviation Hall of Fame, featuring more than 70 inductees—among them Bessie Coleman, an African American pilot who grew up in Waxahachie and rose to fame in the 1920s as a barnstormer; and Houston’s own Red Duke, who pioneered the use of Life Flight helicopters for emergency medical transport.

The Flight Academy Gallery gives an overview of the principles of flight, with hands-on interactive exhibits and an eight-minute film explaining the dynamics of thrust, drag, lift, and weight. Various displays delve into the design and engineering of planes, as well as the navigation skills needed to pilot them. Visitors can take a seat among the controls of a replica cockpit and fly a simple hang-glider simulator. On select Saturdays the museum offers 15-minute “Pilot Ex-periences” with a Mooney M20 simulator for an additional $5. Participants get to practice flying from Ellington Airport to Galveston and back. 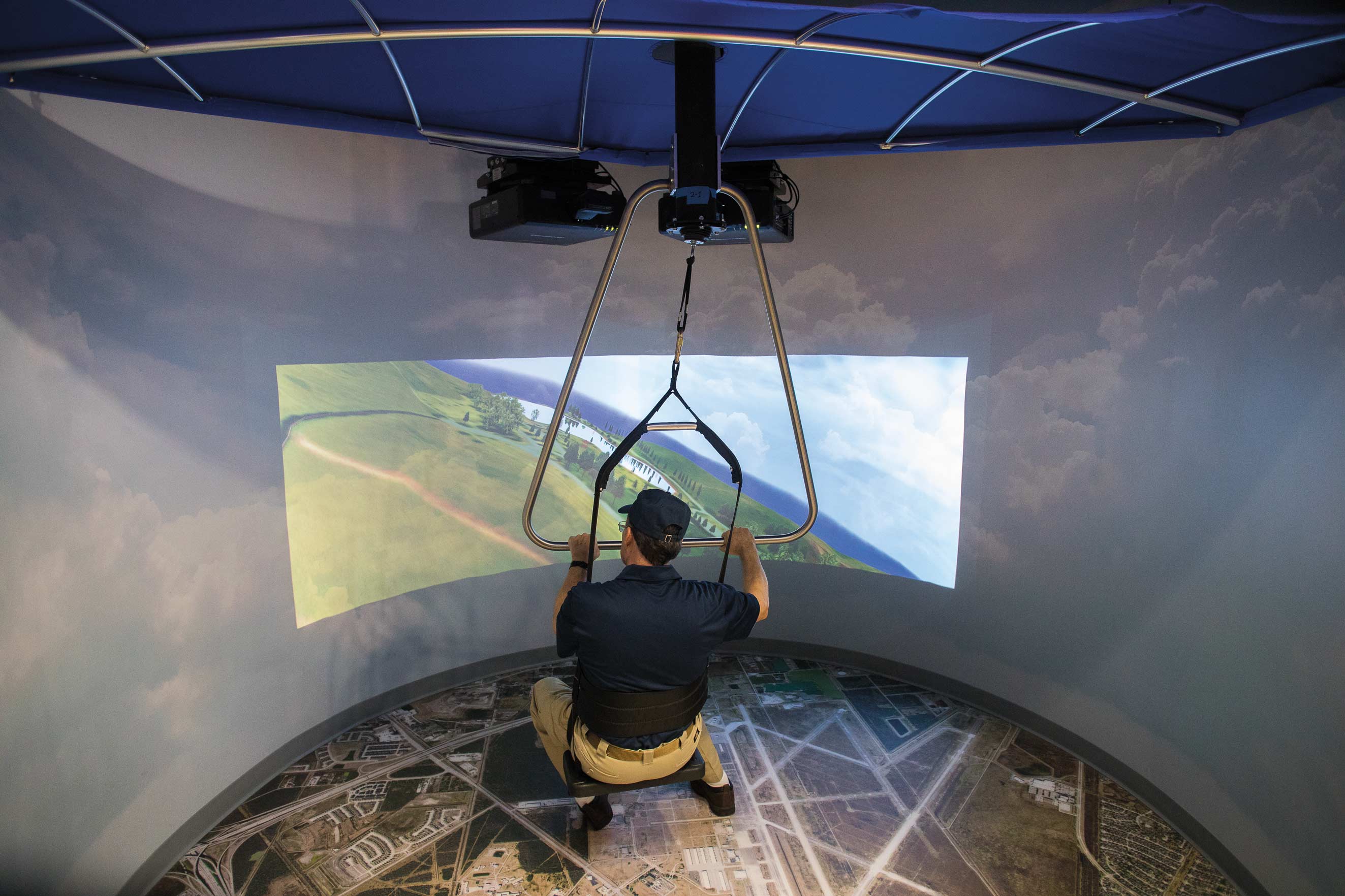 In the Flight Academy Gallery, visitors can try their hand at a hang-glider simulator.

Sheltered in the museum’s hangars, an array of historically significant aircraft illustrate the technological innovations discussed in the galleries. Most of the Lone Star Flight Museum’s airplanes date to WWII, while some served in later conflicts. In addition to displaying 20 from its permanent collection, the museum hosts a rotation of planes from other organizations and individuals.

The museum’s vintage aircraft don’t educate and dazzle only on the showroom floor—all of them can also fly. Among them, eight are available for ticketed flights on fair-weather Saturdays from March through November. The Flight Experiences range in price from $250 for a ride on a 1943 Boeing PT-17 Stearman, an open-cockpit biplane used for training, to $995 for a seat on a rare 1942 Douglas SBD Dauntless, a WWII Navy dive bomber. Among the mid-price-range options are two other bombers: the medium-sized B-25 Mitchell, with room for five passengers, and the imposing B-17 “Flying Fortress,” which can accommodate seven.

The museum’s vintage aircraft don’t educate and dazzle only on the showroom floor—all of them can also fly.

During the approximately 25 minutes spent aloft, passengers get the thrill of going airborne and then exploring the interior. The museum’s crew of volunteer pilots has been specially trained to fly these vintage planes. At the brief orientation before boarding the B25-Mitchell, the pilots warn me not to touch anything “red, rusty, or dusty”—meaning switches, knobs, or equipment that clearly did not need to be adjusted. Yet once in the sky, I am free to clamber about, crawling into the bombardier’s compartment at the nose and also venturing toward the back to catch a breathtaking view of the distant Houston skyline from the gunner’s compartment at the tail. To get from one end to the other, I climb over the central bomb bay on hands and knees before dropping down feet first on the other side. For thrill-seekers, Flight Experiences are the adventure of a lifetime. And for those seeking excitement without leaving the ground, an outdoor viewing area provides views of the planes as they taxi to and from the runway.

Before leaving the museum, I check out the temporary exhibition gallery to see paintings by artist Douglas Ettridge depicting various aircraft in exquisite detail. Afterward, I make a final stop at the gift shop. Though I’m tempted by customized dog tags, model planes, and jewelry made from reclaimed aircraft materials, I already have the best souvenir of all—the memory of winging through the air and seeing my town from an exhilarating new perspective. Whether in the sky or on the ground, the Lone Star Flight Museum provides a fresh outlook on the evolution of flight in Texas—and plenty of opportunity for the imagination to soar.