Don’t call it a weed—sargassum is crucial for turtles, seahorses, and other creatures 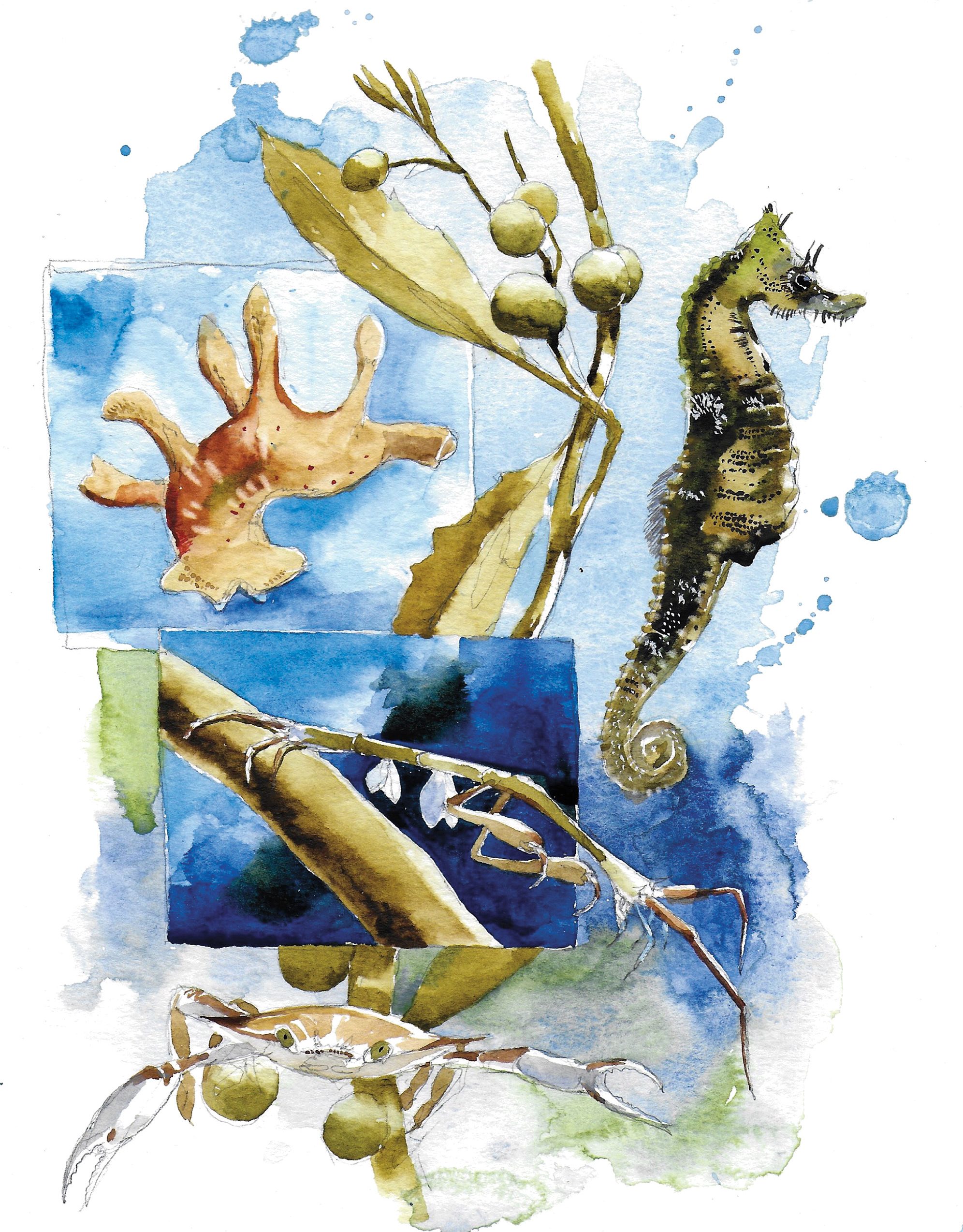 If you ever arrive at the state’s cinnamon shoreline only to discover the entire beach knee-deep in seaweed, congratulations: You’re witnessing the results of one of the world’s extraordinary journeys.

Small quantities of a seaweed called sargassum wash ashore all year long. But every few years, beginning in April, the sargassum arrives en masse—a deluge of amber-colored stems, leaves, and tiny gas bladders that help the plants stay afloat (and pop when squeezed). This relatively unpredictable event seems to occur after huge blooms of sargassum in the Atlantic Ocean, some 2,000 or more miles away. While piles of sargassum might hinder swimming and sunbathing, they also provide opportunities for families and other beachcombers to find seahorses, strange shrimp, and other tiny creatures that hopped a ride to Texas.

“When you see big sargassum rafts wash ashore you should snag a clump and examine it,” suggests Kenneth Dunton, a professor at the UT Marine Science Institute in Port Aransas. “You’ll discover hundreds of organisms—a whole community—living within the sargassum mats.” Dunton’s suggestion involves a bit of unconventional beachcombing, assisted by tweezers, a pair of gloves, and a magnifying lens to view small critters up close.

The Sargasso Sea, a vast region of the Northern Atlantic Ocean, is the only sea in the world that does not have a land boundary.

You’ll quickly discover lots of interesting things, beginning with the inch-long skeleton shrimp, a bizarre mini-crustacean comprised of jointed and transparent bone-like body segments, making it the walking stick of the sea. Then keep an eye out for the lined seahorse (Hippocampus erectus), a familiar beast up to 6 inches in length that makes a habit of wrapping its tail around sargassum branches for a free ride. Hippocampus means “sea monster” in ancient Greek, an apt description for a creature that can change color at will, suck prey up through its snout, and deter its enemies with a body of bony plates and spines.

A plentiful, easy-to-spot species is the sargassum swimming crab. This tiny scrapper, only 2 to 3 inches long, hides in the floating sargassum mats, waiting to aggressively jab at prey that wanders too closely by. Its carapace is spotted with ivory blotches over a background of pale ochre—perfect camo among the similarly colored seaweed. 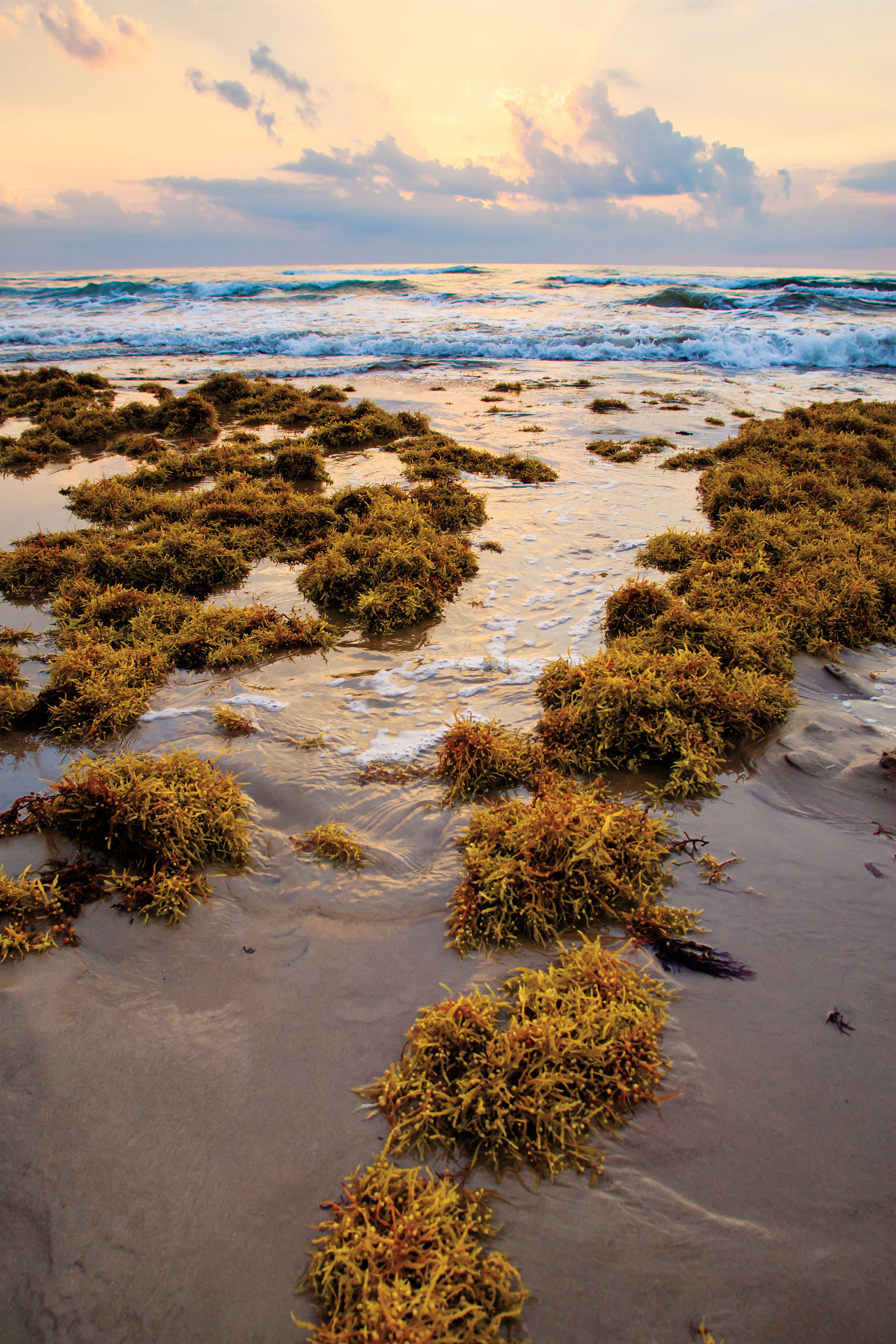 Perhaps one of the most challenging animals to find is the sargassum nudibranch, a strange little organism that looks a lot like the seaweed branch it clings to. Flat but frilly, this soft-bodied mollusk lives like a snail without a shell, replicating the colors and textures of sargassum. But look very closely and you’ll often see a row of tiny electric blue dots decorating its side. Although it looks like a plant, this nudibranch is all animal, utilizing sensory tentacles and gills, and with an insatiable appetite for smaller organisms.

“When you see big sargassum rafts wash ashore you should snag a clump and examine it. You’ll discover hundreds of organisms—a whole community.”

Many Texans might assume that our sargassum is locally “grown.” But the seaweed starts life far away in the Sargasso Sea, a region of the northern Atlantic. Unlike other seas surrounded by land, the Sargasso is bound by four major ocean currents, all flowing in a clockwise direction which forms a spiral or vortex known as a gyre. The Sargasso lies at the gyre’s deep, becalmed center and is the birthplace of two plant species, Sargassum fluitans and Sargassum natans, which float as one.

As the seaweed meadows grow and expand, drifts are caught by the outer currents and sent on their way, some to the eastern seaboard of North America, some to the Caribbean and the coast of South America, and some into the Gulf of Mexico via the Yucatan Strait between Mexico and Cuba. Then, depending on the Gulf’s own currents, the rafts are pushed out to the ocean again or wash ashore along the Gulf Coast.

While afloat in the Gulf, rafts of sargassum provide nursery habitat for a roster of species including baby loggerhead sea turtles, juvenile sailfish, mahi mahi, eel, marlin, chub, and flying fish. The rafts are also feeding grounds for adult fish, which eat the young trying to hide in the weed. Dozens of species lay eggs and produce larvae in the drifts and rely on sargassum’s movement to furnish passage from the deep ocean to the shallow estuaries where the young can mature. 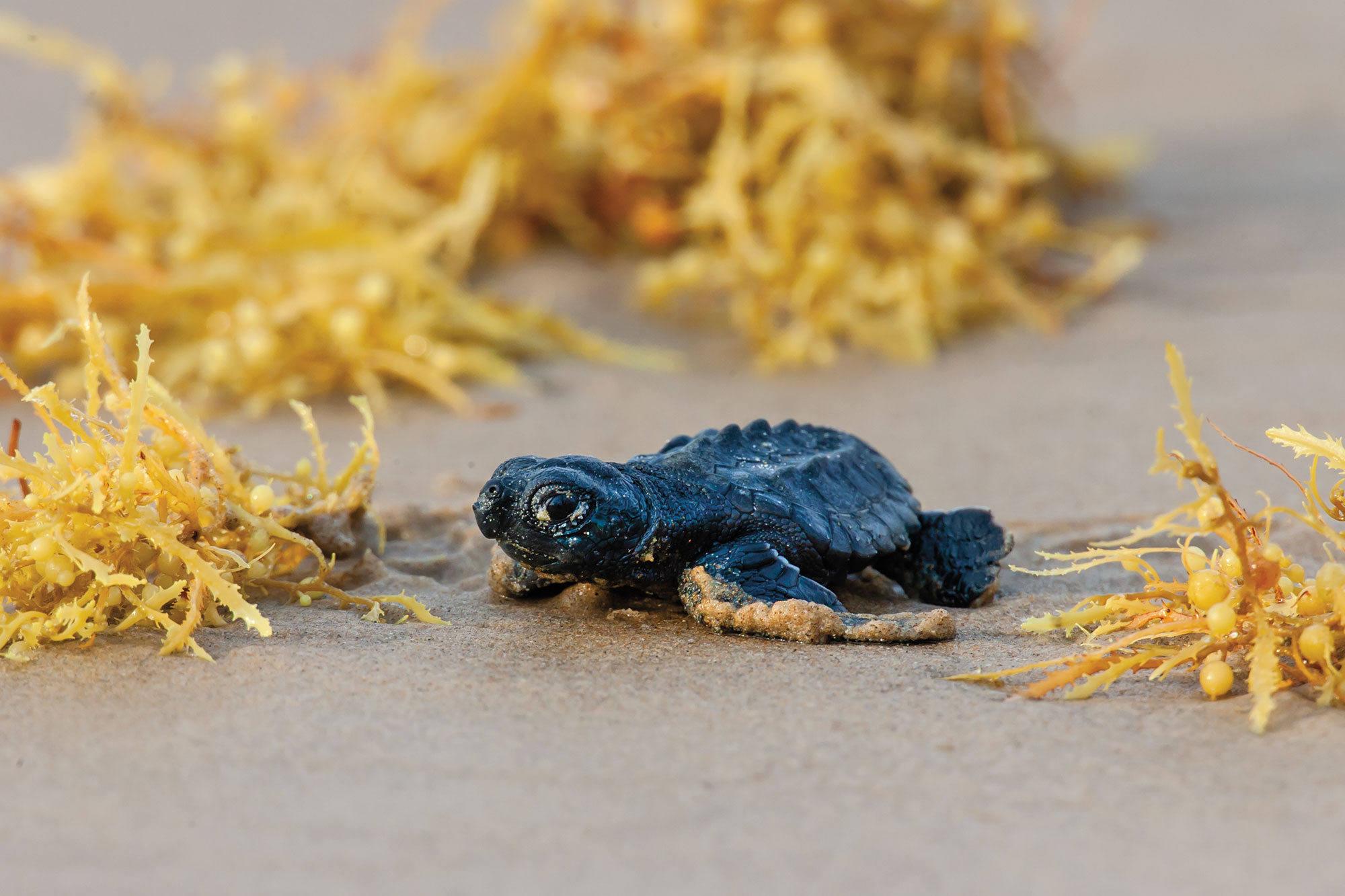 “Sargassum drifts are moving habitats,” Dunton explains, “comprised of both plant and animal. They create their own source of food, like going into space with everything you need. Once the mats finally wash up on the beaches, they help prevent erosion and contribute to dune stability. Plus, the surviving organisms supply food for a completely different group of animals—birds.”

Sargassum communities are often the most diverse while still afloat and before washing ashore, creating an opportunity for Texas beachgoers to see a variety of juvenile species like gray triggerfish, planehead filefish, and pipefish. To do so, grab a 5-gallon bucket and a long-handled dip net (find both at any sporting goods store). Look for floating clumps of sargassum around boat docks, piers, and jetties. Fill about a third of the bucket with water, then scoop up a bundle of sargassum with the net, starting from below the weed, and dump the contents into the bucket. Now poke around in your catch.

This was the technique my own family used to uncover the elusive sargassum fish, a cryptic species that fit in the palm of my mother’s hand. Easily overlooked among the weed due to its mottled camouflage of spots, streaks, and bands, this dazzler features fringed fins and a body embellished with filigree-like designs. Its ability to survive briefly out of water gave us time to make a spellbinding observation. I had never seen a creature in the wild look as magical. The fish appeared to be covered in a lattice of gold, silver, and copper patterns that glinted like jewelry in the sunlight. When my father tried to take a photograph of it, his camera shutter jammed. He tried again. Nothing. Finally, after a long, slow stutter the camera gave way, the shutter clicked, and the spell was broken. We took one last look then launched the fish and its sargassum back out to sea.