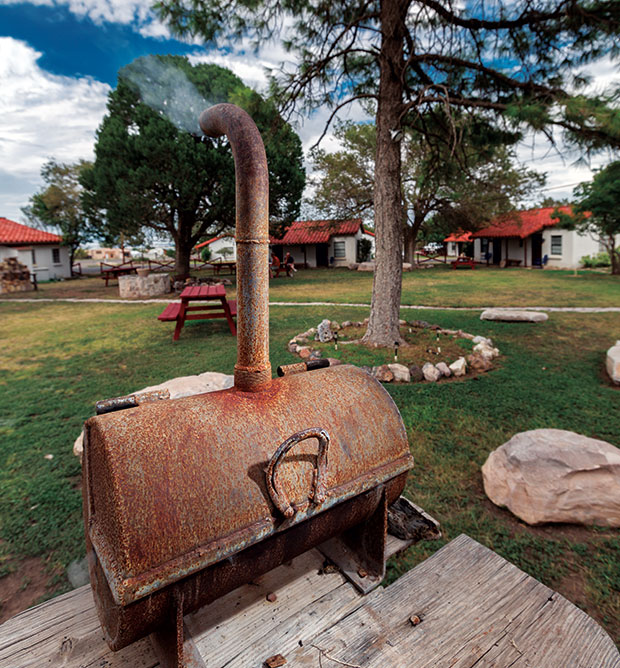 Tired from a long day of driving, we pulled up to the Antelope Lodge in Alpine and were transported into a 1940s-period postcard. White stucco cottages with covered porches and vintage metal lawn chairs framed a grassy courtyard studded with picnic tables. The foothills of the Davis Mountains loomed against a big blue sky behind the retro red-tile rooftops.

Contact information for sites in the story follows. For more information on area attractions, contact local convention and visitors bureaus or chambers of commerce.

My husband, Dan, and I had driven eight hours from our home near Glen Rose to Big Bend for a getaway from the 24/7 wired world. We wanted to unplug in a place where time seems suspended and immerse ourselves in Big Bend’s vintage vibe.

We arrived at the lodge along US 90 road-weary, much like the travelers in the 1920s, ’30s, and ’40s who relied on motor courts and tourist camps. We parked our car next to our building, walked across its stone porch, and unlocked the wooden plank door as decades of other guests had done. Inside, though, we found a mix of old and new—modern amenities such as a walk-in shower in the retro tiled bathroom; a kitchenette with Mexican-tile countertops, microwave, and a small refrigerator; and stained-concrete floors.

Antelope Lodge dates to 1949, when post-World War II travelers hit the road in search of adventure and the experience of the journey itself. But the motor court and tourist camp trend began decades earlier, in the 1920s and ’30s. Thanks to Henry Ford’s mass-production innovations, a car became an affordable luxury for most families, and the road trip became part of American culture.

Roadside camps popped up where travelers could stop for the night. Then motor courts arrived and later, motels. We’re fortunate in Texas that some of these gems along the road remain. But others closed—such as Las Palmas Court in Laredo, the Den-Tex Tourist Hotel Courts in Denison, the petrified-wood Texas Tourist Camp in Decatur, the Pueblo Court in Amarillo, and the San Gabriel Motor Court in Georgetown—in large part bypassed by new interstates and the convenience of chain lodgings.

The lodges and camps that survived did so by evolving. Some underwent renovations and even transformations. For instance, the bungalow-style Hotel San José in Austin combines retro appeal with ultra-modern and sleek, minimalist interiors that attract a hip, urban clientele.

Others, such as the Antelope Lodge, took a “gentle” approach, as co-owner Teri Smith puts it. “We tried to do as little as possible that would change things structurally,” she says. “We wanted this to be a trip back in time, back to when things were slower.”

Teri and her husband, John, were living in Coppell and visited Alpine regularly in the early 1990s. Avid rock hounds, they especially enjoyed hunting for the colorful, beautifully patterned agate known as “Marfa Bouquet” on nearby ranches. They always stayed at the Antelope Lodge on their trips out west.

When the property went up for sale in 1995, the Smiths bought the lodge and began restoring the rooms, updating the furnishings, and improving infrastructure such as plumbing and air conditioning. But Teri says they didn’t want to sacrifice the vintage charm to complete modernization. They retained as much of the “rustic casual” look as possible for travelers who want the motor court experience. “The rooms aren’t as large as they are in the new hotels, but that’s because people didn’t spend as much time inside,” Teri says. 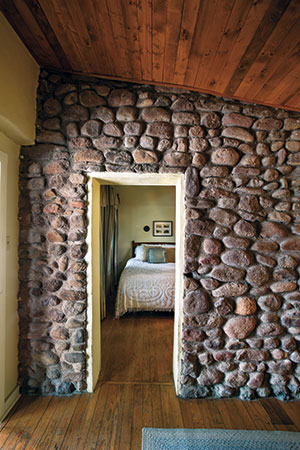 Most of the cottages house two rooms for a total of 28 rooms spread through 15 buildings. Some contain the original “cowboy oak” furnishings from 1949. Each room feels different, with artworks and flooring that vary. A few rooms retain the original 1950-era linoleum tiles or original patterned cement tiles from Mexico. Benches and chairs beckon guests to sit outside, and Teri collects ceramic and metal birds to place on the eaves for a personal, whimsical touch.

The Antelope Lodge’s office also houses the Last Frontier Museum of Rocks & Gems, where guests can view native agate Teri has collected, and the Smith & Wife rock and jewelry shop. Teri says the mason who built the office’s front porch wrote the name “Antelope Lodge” in stone and that some of the porches around the property also bear the letters “A” and “L.”

Continuing our motor-court quest, we drove a half-hour to Fort Davis and the Stone Village Tourist Camp owned and operated by Randall and Belinda Kinzie. Randall’s grandparents, Pat and Lucille Watts, once owned the motel, and Belinda manages the Stone Village Market next door, a market stocked with organic and gourmet foods, along with a deli that’s a good spot for lunch or picnic supplies.

Stone Village—constructed of rock, adobe, and stucco plaster—has been in continuous operation since 1935. At the time, area tourist attractions were on the rise, including the Civilian Conservation Corps-built Davis Mountains State Park and the Pueblo-style Indian Lodge. The tourist camp has been completely remodeled. Randall unlocks several rooms to show me the updated spaces, decorated with framed vintage postcards on the walls, beds with chenille spreads, flat-screen TVs, and modern baths.

For those who want more of a rugged experience, the motor court’s original garage spaces have been converted into seven small “camp rooms” with screen doors and stone walls. “These are indigenous rocks,” Randall explains. The natural feel of the place continues on the long portals with ponderosa pine posts and in the landscaped area around the pool and patio, where there are more pine trees and a spectacular view of Sleeping Lion Mountain.

Back in Glen Rose, Dan and I are lucky to live near one of the state’s oldest surviving motor courts and tourist camps, Glen Rose’s Oakdale Park. Oakdale celebrates its 90th anniversary in May, and still draws visitors with its wooden cottages, stone cabins, RV and tent campsites, pavilions, and tree-shaded lanes. It’s popular for reunions; several families have been coming back to Oakdale for more than 50 years. 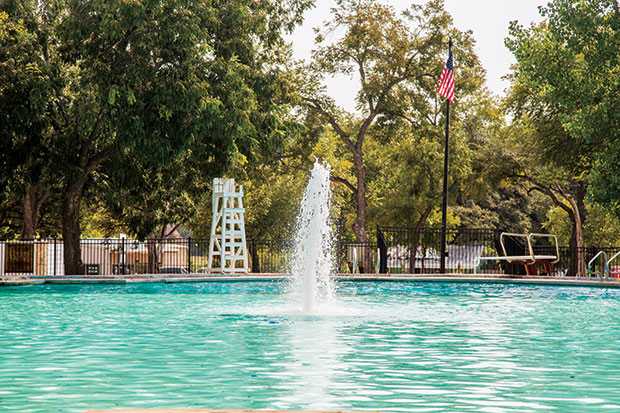 On warm days we head to Oakdale’s 330,000-gallon pool, called “The Plunge,” one of the largest swimming pools installed in Texas at the time. Several years ago it was renovated with a new bottom and mosaic tile, lifeguard stands, and diving board and slides, plus fountains and a splash pool for kids.

In 2010, the City of Glen Rose spent $1 million to buy and renovate the park. The 25 cabins and cottages have been updated with new furniture, kitchenettes, and bathrooms, and the 104 RV spaces offer 30/50-amp service, full hookups, and WiFi.

But the place still feels like a step back in time. Kids can swing at the vintage playground while their parents pitch horseshoes. The wooden-floored skating rink has been remodeled and turned into a convention center, but the structure’s rock-wall fireplace—built with fossils and stones provided by visitors from across the country—remains as a conversation piece.

“It’s a laid-back, country setting, even though you can walk to downtown Glen Rose from here,” says Park Manager Kelly Harris. “Families don’t have to worry about their kids. They can ride their bikes around here. There is so much just in this 25-acre area that is family-friendly and family-safe.”

Each spring and summer, Oakdale hosts bluegrass festivals, and bluegrass musicians show up on the third weekend of each month to jam. An annual dulcimer festival, woodcarvers festival, gospel grass festival, and fall festival keep the park bustling with campers, families, and music year-round. And Big Rocks Park on the Paluxy River is right across the street for those who want to wade and fish.

Even older than Oakdale, Rainbow Tourist Camp in Rockdale opened in 1918 before US 79 was paved. Nathan Monroe Bullock built the Central Texas camp for migrant workers as well as tourists. Then his brother, Ira Benjamin Bullock, joined the business.

By the early 1930s, the camp had morphed into a bed-and-breakfast. “They started off with four cottages and it just grew to 50,” says Joan Ratliff, granddaughter of Ira Benjamin Bullock. In 1992, she and her husband, Dan, bought Rainbow Courts from her parents.

The Texas Historical Commission has accepted Joan’s application to have Rainbow Courts designated as a Registered Texas Historical Landmark, and Joan says a marker may go up by the end of the year. Several structures on the 4.6-acre property date to the late 1880s, including a carriage house and a schoolhouse that was moved here from a nearby community called Talbott Ridge. Joan says that her grandfather went to school in the structure and he “was pretty sentimental about it, so in the 1940s he bought it and moved it on site.” 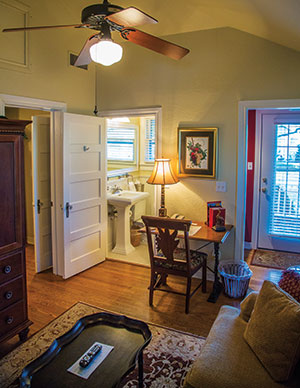 At Rockdale’s Rainbow Courts, each of the rooms features a different décor. Photo by Will van Overbeek.

Guests can choose from 37 rooms, suites, and corporate apartments. Most suites are equipped with a full kitchen, refrigerators, coffee makers, microwaves, cable TV, and WiFi. The lush, landscaped grounds attract weddings and family reunions, as does the vintage ambiance. Three of the original petrified rock picnic tables remain, and swings again hang from the tall oak trees.

Travelers seek out these renovated tourist courts because they “want something unique,” Joan says. “They don’t want cookie-cutter. Not one room is decorated the same. We’re small enough that we can provide very personalized service, and we’re just so homey.”

And, as Joan says, these vintage homes-away-from-home offer an attraction that many people crave—something old, something new, and “something different.”

Glen Rose-based writer Kathryn Jones recalls that her favorite family vacations while growing up in South Texas always involved a road trip and a campground or lodging steeped in history. They still do.