Wake Up to Waxahachie

A weekend in the gingerbread city 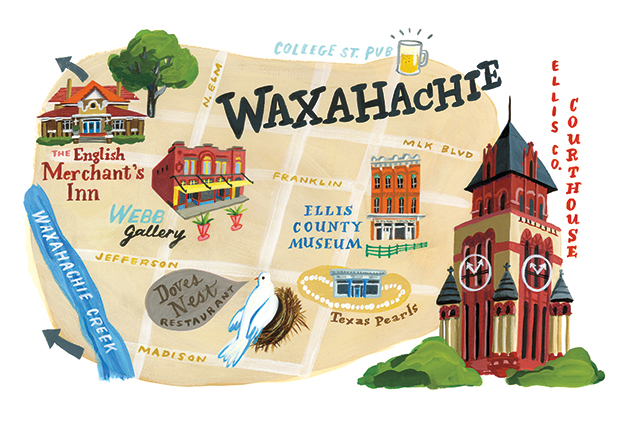 Growing up less than an hour’s drive from Waxahachie, I’ve always been familiar with the historic town just south of Dallas. Because I hadn’t spent time there in years, however, I took pleasure in discovering it again recently. The bonus? My husband had never visited Waxahachie, so I was thrilled to see it through new eyes during our weekend visit.

Waxahachie has long been one of the best places in Texas to indulge in a passion for later 19th-century architecture. And though the heart of town provides a wealth of historical eye candy, Waxahachie cannot be dismissed as a place stuck in another era. Thanks to a long-term partnership between the city’s downtown development office and Jim Lake Companies, the Dallas developer that helped revitalize Dallas’ Bishop Arts District and Design District, downtown Waxahachie thrives with ongoing building renovations that attract new shops and restaurants. We discovered plentiful examples of the old and stately becoming new, beautiful, and accessible again.

To provide maximum visual impact for my newbie visitor, we started our tour downtown with a spin around the Ellis County Courthouse, a sight that impresses me every time I visit. “Wow,” Marshall said, gaping at the ornate 1895 structure rising nine stories over the center of town. “You weren’t kidding. That’s awesome.”

Designed in the busy yet elegant Richardsonian Romanesque architecture style, the courthouse features details that are almost too complex to take in all at once. Adding to its beauty is the building’s magnificent amalgamation of red limestone from Burnet County in the Hill Country and pink granite and Pecos red sandstone from a quarry outside of Barstow in far West Texas.

For a briefing on the town and to pick up a free touring map, we popped into the Ellis County Museum, just southeast of the courthouse. The museum occupies the mercantile space inside the former Masonic Lodge Hall, an 1889 high Victorian Italianate structure standing three stories. Exhibits in the glass-front cases include military garb and weaponry from the Civil War through World War II donated by local residents, as well as signage, hardware, radios, and memorabilia from long-gone local businesses. I particularly liked the colorful wartime posters, such as one dating to World War II that warns: “Loose lips might sink ships.”

We then explored the town square, wandering in and out of various shops and noting the profusion of historical markers on nearly every building. Thanks to the riches delivered by a booming cotton industry and the arrival of the railroad in the late 1800s and early 1900s, Waxahachie’s business leaders erected exquisite commercial buildings and homes attesting to their wealth.

The busier shops speak to the popularity of furnishings and housewares that look old, even if they’re not: At Texas Pearls and Co., chairs, tables, sofas, and cabinets bear the Magnolia Home brand, known best to fans of the Waco-based Fixer Upper show on HGTV. Besides restored and painted furniture, the shop’s goodies also include paint and home accessories, such as candles and mirrors. Across the street, a shop called Farmhouse also mixes old and new finds, from flower vases and garden birdhouses to a silver tea service and an old dresser transformed into a bathroom sink and vanity.

Poking around shops works up an appetite, so we headed into a favorite restaurant of mine, The Doves
Nest. Set in a 1913 building that was once a hardware store, the business includes a sprawling shop that sells everything from Texas cookbooks and costume jewelry to bath soaps, hats, and handbags. And at the rear of the store, in what was the saddle and tack room, there’s a popular café serving lunch daily.

Starting with the signature appetizer, we dug our way through the ABC Spread, a mixture of toasted almonds and minced bacon with grated cheddar cheese, which we piled on pieces of fresh, crisp crostini with dabs of strawberry-jalapeño jam. We followed that up with a salad of grilled chicken over greens with crunchy vegetables and a sesame-soy vinaigrette; and a flavorful Texas muffaletta sandwich.

A few doors away, the Webb Gallery adds another dimension of culture to the square. Famous for its folk-art collection, it’s also a friendly place to visit, thanks to the two resident Boston terriers that came bounding across the painted wooden floors to greet us. The duo persuaded us to relax on couches so we could pet them while admiring a collection of antique circus and carnival posters as well as paintings, such as those of flowers and birds by the late Uncle Pete Drgac, who lived in the Central Texas town of Caldwell.

Before departing downtown, we wandered down to the old railroad depot area for a little pick-me-up at Fresh Market Coffee. A happy buzz filled the air, along with the aroma of coffee, as patrons visited and played bottle-cap checkers on vintage wooden boards. Besides coffee drinks, Fresh Market serves homemade baked goods and cold drinks like bottled tea and cold-brew coffee. We wish we’d brought a cooler so we could take home packages of local cheese, yogurt, and tamales, along with fresh flowers for purchase.

Hopping into our car, we consulted our driving tour map. To make things simple, we stuck mostly with Main Street and the dozens of intriguing homes lining it, many of which show up on the town’s gingerbread tours in June and at the Christmas season. An hour in, we had taken in one eyeful after another of Eastlake, Queen Anne, Gothic, and Victorian homes with curved porches, octagonal corner turrets, gabled roofs, stained-glass windows, and fish-scale shingle details.

As we roamed, we found ourselves at Getzendaner Park, filled with beautiful crape myrtle trees, a signature of Waxahachie. We wandered around for a few minutes in the company of butterflies on the Waxahachie Creek Hike & Bike Trail, which extends six miles through town.

Ready to put our feet up, we checked into The English Merchant’s Inn, a handsome red-brick home built by British cotton merchant James Wright Harrison circa 1915. Owners Mary and Howard Baskin have decorated the inn with books, artwork, and memorabilia to satisfy the anglophile’s passion. The inn’s living room is especially inviting for lounging and reading, while a movie room offers a place to watch Places in the Heart and Tender Mercies, both of which were filmed in Waxahachie.

Our spacious suite—done up with pillows emblazoned with the Union Jack and outfitted with a comfortable bed—opened to a balcony overlooking the front lawn and Main Street. We might have lazed about for hours, but dinnertime meant going out in search of a bite. We found much to enjoy at College Street Pub, where crispy fried green beans, a basket of fish and chips, and the signature French Burger—a patty melt on Texas toast—made for a tasty, casual supper in a convivial bar decorated with more Union Jacks.

We drew out our final morning in Waxahachie, lingering at the inn over beautiful Belgian waffles with fresh berries. We made one last stop downtown, where we craned our necks to stare up at the original, functioning clock tower crowning the historic courthouse, noticing how high it looms above even the surrounding pecan trees. Capturing the courthouse with our camera in the fresh daylight, we admired the detail of the exquisite carvings in the capitals topping the columns, many with flowers, leaves, and intricate faces. Driving home, I realized I’d fallen anew for this gentle town.