Written by Lois Rodriguez, Photographs by The Menger Hotel | From the November 2015 issue | Updated: August 12, 2019 | Filed Under: Uncategorized 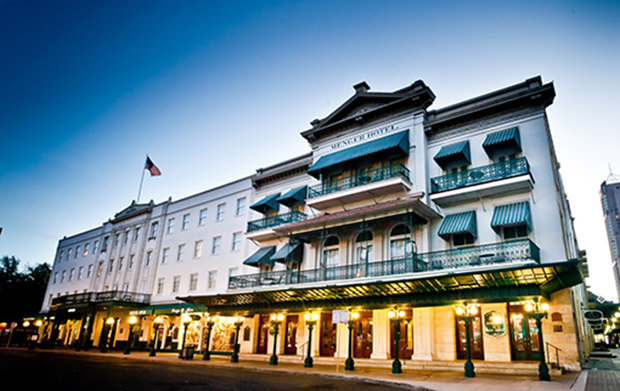 Most Haunted Hotel in Texas?

In March 2011, I was to stay at the Menger Hotel in San Antonio over several days for a conference.

When I checked in, I was pleasantly surprised that my room was on the third floor in the older section of the hotel. I love history and the fact that this hotel is located just across the street from the Alamo is something that would make my stay so much more pleasant.

Before I got to the Menger, I had heard of the legendary personalities that had stayed in the hotel.  Babe Ruth, Richard King and others had been repeat guests.

I remember bigger than life stories told by my favorite Texas history teacher Mrs. Beck.  I recall that the accounts she shared with my class made me wish that I had witnessed first-hand Teddy Roosevelt and the Rough Rider charging through San Antonio backstreet saloons, hotels and promenades recruiting volunteers from horseback or the volunteers who gave their lives standing for a Texas ideal.

My room was big and older, white paint covered the aging walls, and the huge window frames overlooked an outdoor open-air patio.  Nothing fancy, like newer hotels, but special just this same.  I dropped my small carry on case and purse and hurried downstairs to check in at the conference registration table.  The desk attendant assured me that my luggage would be brought up shortly.

After check in, I learned there would be a business mixer downstairs.  I wanted to freshen up my makeup since I had driven to San Antonio that afternoon from the Rio Grande Valley.  When I stepped into the room, I noticed that the television and closet light were on.  I quickly turned them off thinking that the housekeeper had turned them on and left the room.  I thought that was strange.

After the mixer, people were going to dinner.  I wanted to go upstairs to shower and change.  When I got there, the television, the ceiling fan, clock radio, room lights, bathroom lights and closet light were all on.  I called the front desk and asked if the housekeeper or porter had come in or if someone might have gotten into my room by mistake thinking it was their room.  The answer was no on both accounts.

At this point, I figured it’s an electrical problem.  The front desk sent someone up.  He didn’t find anything and said if I had any further issues, if they had rooms available, I might change rooms.

As soon as I stepped into the bathroom, I felt an uneasiness settle in, like someone was watching me.  I was alone.  The windows were high and the angled shutter slats verified that nobody could see in and I was on the third floor, so I decided to quit worrying about it.

The feeling grew more intense as I took a shower.  I got a quick burst of air as if someone opened the bathroom door.  I told myself that I had gotten a quick blast from the air conditioning unit airflow from an air vent.

I continued to shower and began to shampoo my hair.  I couldn’t get rid of the feeling that someone was there.  If not in the bathroom then in the other room (how embarrassing if the porter had come back for something).   I yelled, “Hello?”  I quickly rinsed my hair and got ready to go out.

That night when I got back to the hotel, I prepared for bed and got the same feeling of being watched but shrugged it off.

I felt an uneasiness settle in, like someone was watching me.  I was alone.

After laying my clothes out for the next day, I lay down and drifted off.  I kept hearing footsteps coming down the hall and heard whispers outside the door.  Maybe people from nearby rooms were returning late.  During the night, the feeling of being touched awakened me.  I thought it was a dream.  I realized I felt an impression in the bed.  I felt an arm around my shoulder.  It felt solid.   Slowly, I realized that I was not dreaming. On the other hand, was I?  I became scared and then angry.  With what courage I could muster (and eyes shut) I mumbled, “Leave me alone.”  Once I said this, the feeling of the arms around me faded.

After that night, other than finding things in different places in my room (a shoe missing, hairbrush placed somewhere else) or closet light on when I returned to the room or clock radio that would suddenly turn on, I was not bothered again. I still got the feeling that I was not alone even though I was the only person walking in a hallway.  If I was alone, I took to singing or humming as I walked to and from my conference events.

My husband happened to be in Austin for a business trip and wanted to have lunch at the Menger Colonial Room Restaurant.  I had a little while to wait while he drove in to meet me.  Before he arrived, I used the bathroom downstairs in the lobby across from the gift shop.  While I was in a stall, I heard the door to the bathroom open from the hall. I heard nobody and saw no shadow, but I did hear a stall door open and close.  I was curious.  Ever so carefully, I took a quick look around.  I was the only one there.

Days later, on my elevator ride to check out of my room, I had a conversation with a porter.  He asked about my stay.  I told him it was interesting for sure. He asked why and I told him that I felt like I had been “bothered by a presence”.  That’s all I ventured to say about this experience because I feared being looked at like a crazed guest. He asked in what room I had been.  I told him and he said that that part of the hotel and floor was the “most active”.

Since, I have discovered that more people have come forward about such spectral happenings at the Menger.  Some have posted their experiences on YouTube. Don’t believe me? Check it out for yourselves.