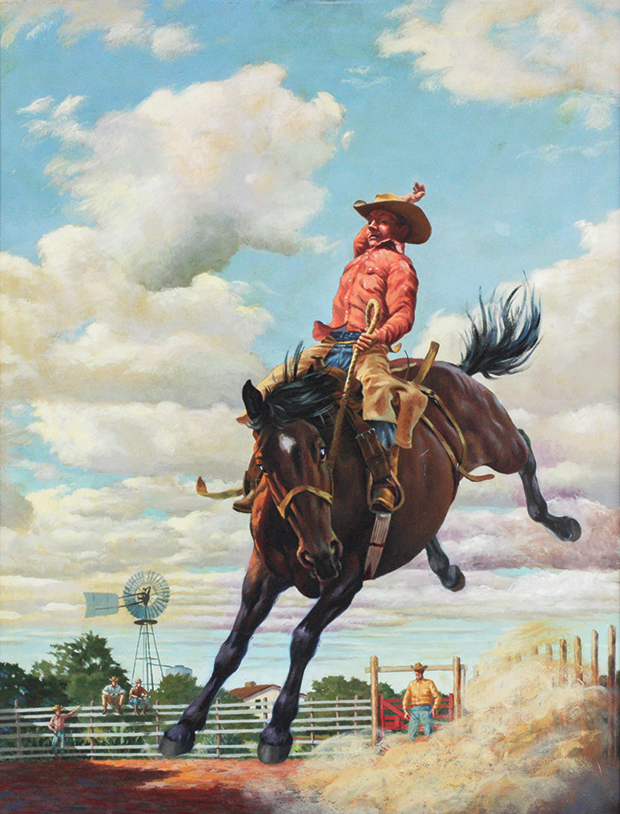 Given the musty, mud-brown educational hallways of my youth, the last thing I expect to see when I walk into a high school is a museum-worthy collection of fine art paintings. Yet one exists, comprised of works by American impressionists, post-impressionists, European artists, and Texas regionalists hanging up and down the hallways of Amarillo High School. Here at Amarillo High, it’s as if fine art and high school were as routine a pairing as homework and the family dog’s enthusiasm for chewing it up.

The Amarillo High School Art Collection is an achievement against odds, a brainy, 72-year-old concept institutionalized by R.B. Norman, principal of Amarillo High from 1929 to 1961. Norman wanted to give Amarillo students, isolated in the post-war Texas Panhandle, the kind of education that only first-hand exposure to the arts could provide. In 1945, he formed a committee and set three rules for assembling an art collection for the high school: The artwork should maintain an aesthetic appeal as well as a high investment potential; the collection would not include local artists; and, most important, the paintings must hang in the hallways where students could see them every day.

Norman used school money and donations from the Junior League of Amarillo and others to build the AHS collection. He also recruited an expert with a knack for spotting good works, Atlanta art dealer Carlton Palmer. Palmer would buy paintings along the East Coast and then sell them to buyers in the Southwest. Arriving in the Panhandle of the 1940s and ’50s with a vehicle full of paintings, he’d stop first in Amarillo before continuing south to the Big Bend. Along the unpaved ranch roads from Van Horn to Sanderson, he would offer landscape paintings by European and American artists to ranch matriarchs who had an eye for the refined. Art painted in the style of the impressionists (loose brush strokes, a free use of color) and made by members of the Barbizon School (who created romantic, tonal scenes of the agrarian countryside) were particularly popular. These depictions of verdant fields, pastoral respites, and lush woodlands were a distinct contrast to the dry, West Texas desert grasslands that existed just beyond the walls of the ranch house parlor.

Paintings by lesser-known artists working in the impressionist style (there are still many in the art world today) make up a good portion of the AHS collection. But the core collection features handsome examples of exceptional early American painting, works that many art enthusiasts would be delighted to enjoy every day. Thomas Cole’s Tivoli-On-the-Hudson, a bucolic scene of rowboats, sailboats, and steamers navigating the Hudson River, is important as much for its depiction of the 19th-century Northeastern landscape as it is for the fact that Cole, born in 1801, was founder of the Hudson River School of landscape painters, a movement canonized in American art history.

The collection also includes examples of the Taos Society of Artists with paintings by E. Irving Couse and E. Martin Hennings. The society represented a small group of visual artists who made Taos, New Mexico, their home and source of inspiration during the first few decades of the 1900s. Couse’s Indian and the Firelight is a classic example of the artist’s distinct style and period Native American narratives. In Hennings’ striking Drying Peppers, line and color converge to depict the heat of a northern New Mexican day in the 1920s. Closer to home, the works of Texas regionalist Porfirio Salinas Jr. are represented by Blue and Gold, an autumn scene of the Hill Country, as well as Texas Bluebonnets. Texas regionalism is a style associated with artists like Salinas who painted in the first half of the 20th century and garnered lasting attention for their innovative interpretations of the Texas landscape and people. Salinas, born in Bastrop in 1910, painted through much of the early to mid-20th century and is favored for his landscapes and depiction of Mexican and Tejano life.

By the 1960s, the collection afforded Amarillo High School students a close-up look at styles, subject matter, and painting techniques that had occupied many artists of an earlier age. Impressionist painting was most prevalent, providing students with an opportunity to examine an artist’s method for reinterpreting the world around them without losing sight of its subject matter. Understanding art, self-expression through a medium like paint, is always a challenge. But impressionism can serve as a handy bridge for understanding the variety of ways to see things, helping to awaken the concepts of perception and interpretation in young minds new to artistic endeavors. 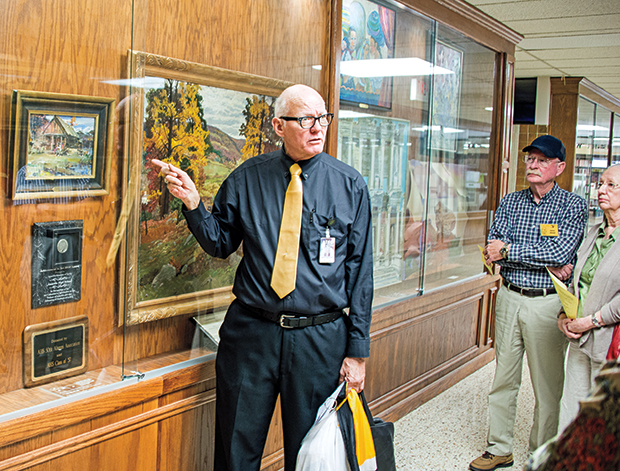 Amarillo High acquired the 63 paintings that compose the bulk of the collection between 1945 and 1963. Another 39 were added later. (The school now relies exclusively on donations to add paintings. The AHS 50th Alumni Association funds the collection’s maintenance.) Custodians have adhered to Norman’s trinity of rules—with a few exceptions—and today the collection is an achievement that students, teachers, and administrators continue to take pride in calling their own.

“AHS has been a tremendous steward and ambassador for this art collection,” says Michael R. Grauer, associate director for curatorial affairs/curator of art and Western heritage at the Panhandle-Plains Historical Museum in Canyon. “Some museums would kill to have a collection this good.” The appreciation and curatorial care have served the collection well over the long term, considering it all could have gone up in flames.

One early morning in March 1970, a passerby saw flames and smoke billowing out of a third-floor window of Amarillo High. A boiler had overheated, igniting a second-story storage room. The fire spread easily to the upper floor, endangering the entire building. AHS students and teachers were on the scene quickly, determined to save whatever they could.

“Mr. Earl Mills, Mr. Davidson, and some students braved the flames and smoke to rescue the paintings,” writes Gary Biggers, AHS graduate, teacher, and caretaker of the art collection for more than 30 years, in his Comprehensive Guide to the Amarillo High School Art Collection. “From the second floor windows canvases were sailing to outstretched arms of people eager to rescue the treasures.” Remarkably, every painting survived. The high school building, however, was almost a total loss.

Today, the collection continues to grace the halls of Amarillo High, which relocated to a new building in 1973. The school commissioned custom cabinets to house the paintings and added glass panels for additional protection. Otherwise, the paintings hang in much the same way as they always have, in full view for students to learn and enjoy.

The art world, on the other hand, has changed dramatically. Thanks to the internet and social media, dominated in many ways by the youthfulness found in the halls of Amarillo High, the universe is awash in images and inundated by a creative idiosyncrasy that would have been completely foreign to painters working in the art styles of the 19th and early 20th centuries. Is the collection, with some of its best work painted close to a hundred years ago and under a remarkably different sensibility, still valid as a tool for education and the arts? AHS art student Jonathan Alonso thinks so.

“The art collection at Amarillo High makes me happy that I go to a school that appreciates the value of art,” says Alonso, a junior. “I’m glad it’ll be preserved for future generations of artists like me. And maybe most important to me personally, anytime I need inspiration I can come here and find it.”