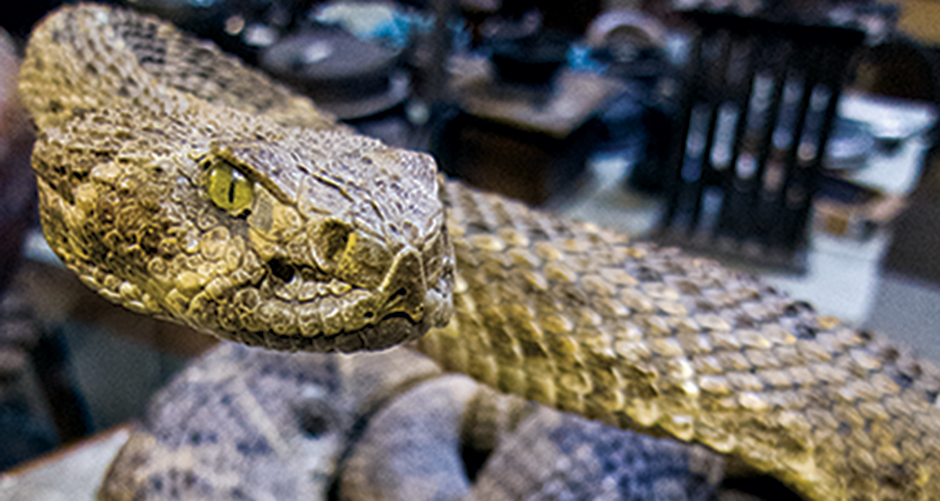 A rattlesnake – stuffed and mounted – in the museum’s main gallery.

J. Marvin Hunter, the late founder of the Frontier Times Museum in Bandera, liked to say that he didn’t collect the curiosities that filled his galleries, they collected him.

As the publisher and editor of Frontier Times magazine and the Bandera New Era newspaper in the 1920s and early ’30s, Hunter received so many pioneer-era relics from readers that he started the museum in 1933 to house the growing collection.

“Mr. Hunter wanted to bring the world to Bandera,” says Rebecca Norton, the museum’s director. “And since Bandera is known as the ‘Cowboy Capital of the World,’ visitors often expect to see just cowboy items. They’re amazed to find that we also have such things as a Ming Dynasty gong and a Ve-netian birthing chair from the Middle Ages.”

Located a block north of the Bandera County courthouse, the Frontier Times building itself is a museum-quality artifact. Stonemason Hough LeStourgeon constructed the walls with stones collected from local ranches and decorated the structure with fossils, petrified wood, crystals, agates, and other geological curiosities within the mortar.

A large ammonite fossil graces one of the museum’s fireplaces, along with inset arrowheads and fossilized clams. On another fireplace, marbles spell out Hunter’s name above an array of inlaid fossils, shells, and a muzzle-loading shotgun.

When I first wandered into the museum some 33 years ago, it reminded me of the antique crazy quilts my grandmother used to make. There was a little bit of everything, it seemed, stitched together every which way. And it was all fascinating. A stuffed Gila monster and a two-headed goat, for instance, shared space with a retro permanent-wave machine that looked to be straight from a science-fiction film.

In short, the semi-random, handmade quality of the exhibits was packed with native charm, the kind of maverick appeal that can sometimes get lost in more formal halls and galleries. So when I heard in 2006 that the museum board had hired a consultant from the Witte Museum in San Antonio to upgrade the museum and its exhibits, I feared that the eccentricities that made Frontier Times so special might be city-slickered out the door.

Not to worry. When I returned to Bandera this past summer, I found that the museum’s beloved quirkiness had remained intact—and had even been improved. “Frontier Times Museum reminds me of the old cabinets of curiosity that were the forerunners of modern museums,” explains Norton, the consultant who later became the director. “And I wanted to preserve that spirit. It’s a wonderful snapshot of many of the types of museums Texas had in the 1940s and ’50s—it’s a window into the world before TV.”

To spiff up the museum, Norton first did an inventory of its collection of thousands of artifacts, the first such accounting since 1952. Then she opened and cleaned vintage display cases that hadn’t been touched in decades.

Norton also made the museum more user-friendly, regrouping some displays for easier navigation. “The sheer number of items on view can be a bit overwhelming,” she explains. Very few artifacts were removed from the galleries. Visitors can still see, for example, the panoramic photograph of Bandera County pioneer Amasa Gleason Clark’s 100th birthday party in 1928, as well as Clark’s camel-hair pillow made from camels stationed at nearby Camp Verde in the mid-19th Century.

The museum’s Doane Art Gallery showcases Western art in a 1972 addition named for artist F.B. Doane, who bought Frontier Times after Hunter’s death in 1957 and whose heirs later donated the museum to Bandera County. A Stalls of Fame section spotlights area rodeo greats, such as Bandera legend Ray Wharton, the 1956 world champion tie-down calf roper. The Texas Heroes Hall of Honor recognizes “remarkable individuals and wondrous characters who … help keep Texas Texan.” The signage inducting Bee Cave resident Terry Boothe notes that the honoree discovered the “West Pole” on his Travis County property in 2007—a discovery later certified by the Texas Legislature. As one of the merry pranksters in the Benevolent Knights of the Raccoon, Boothe also initiated the annual Armadillo Day in February 2012, when an armadillo named Bee Cave Bob emerges from his subterranean lair at the West Pole to proclaim whether Texas will enjoy an early spring or endure an extended winter.

J. Marvin Hunter himself, I have to believe, would have certified Boothe’s pioneering discovery and appreciated his talent with the Texas tall tale—an honorable tradition forged in frontier times.