The Tandy Leather Museum in Fort Worth 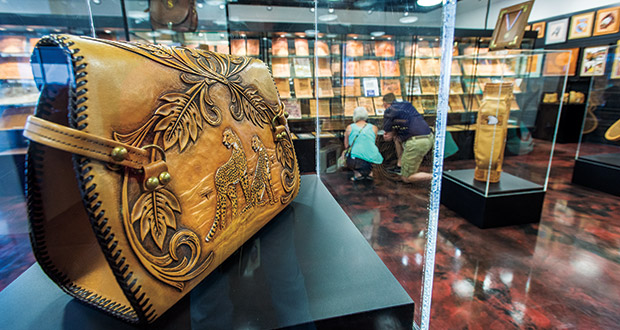 “There was only one day a week when he would take phone calls,” says Charlie Davenport, curator of the Tandy Leather Museum in Fort Worth. “And if we needed to see him in person, somebody had to go up to Canada. He had everything he needed there, and he was engrossed in his work.”

Stohlman’s craftsmanship is a centerpiece of the Tandy Leather Museum, located at the headquarters of Tandy Leather, a company that sells leather and leather-crafting tools and supplies. The 2,200-square-foot museum showcases the works of 18 artists and chronicles the development of modern leather-working over the past century—a craft intertwined with Fort Worth’s legacy as a center of the cattle industry. In addition to decorative designs and representations of people, landscapes, and animals, the master leatherworks on display include utilitarian items such as saddles, a guitar case, and a golf bag. Exhibits also reflect the history of Tandy Leather’s popular leather-craft kits and instruction materials.

Stohlman, who died in 1998, started working with leather during World War II while stationed in New Guinea with the U.S. Army. Experimenting with a pocketknife and filed nails on a GI-issue leather belt, he learned that different tools would produce a variety of results and that employing a mallet or striking stick would provide greater depth and detail to his carvings. He honed his craft after the war, becoming one of the United States’ most accomplished leatherworkers and developing new tools and an influential set of instruction manuals for Tandy Leather.

The museum’s Al & Ann Stohlman Collection includes original drawings and technical details for many of Al’s instructional manuals, such as Belts Galore, How to Make Holsters, and the 1962 Al Stohlman Home Study Course for Tandy. The latter has helped hundreds of thousands of burgeoning artists learn to express themselves through leather craft. The display of four Stohlman-made saddles with different styles of horns, cantles, and rigging supplements original drawings and instructions for his three-volume Stohlman’s Encyclopedia of Saddle Making. Tandy still publishes some of Stohlman’s manuals, which are popular with both master crafters and beginners.

Other outstanding Stohlman pieces on exhibit include a guitar case decorated with roses and a leather golf bag, both made by hand. A hand-carved leather artwork entitled The Brush Popper, set in a leather frame, depicts a cowboy on horseback herding strays from the brush in a rugged valley.
In addition to layers of leather, the three-dimensional work incorporates silver conchos, buckles, and spurs. The work measures 43-by-27 inches, and the carving alone took Stohlman two months.

Another of the museum’s exhibit cases features the work of the late Elizabeth “Liz” Freriks of Detroit. Her leatherwork, as described by exhibit text, was “more artsy” than most, encompassing “chic millinery creations.” She used a swivel knife to “brush” or “paint” on leather. Her work included contemporary design for purses, which she carved as art pieces. A representative leather-brimmed hat and handbag set is included in the case. Freriks also created custom leatherwork for car interiors, embellishing the automobiles of such stars as the singing-cowboy couple Roy Rogers and Dale Evans.

“My interest has always been to help people find ways to use leather in every way,” Freriks is quoted in museum text. “Virtually anything and any art form can be adapted into leather, even jewelry.”

Her display case also includes a 1956 Detroit Times Pictorial Living article entitled “Leather Is Jack of All Hobbies,” along with several of Freriks’ personal tools, such as a stamp, wooden mallet, rotary punch, safety beveler, and swivel knife.

“The tools haven’t changed much at all since she used them in the 1950s and ’60s,” says Davenport. “Those are exactly like the tools we use today.”

And speaking of tools, the museum exhibits also include the master set of leather-crafting tools from the first production run created by tool ma-chinist Oliver Sturdy for the Craftool Company. Dick McGahen, who founded Craftool in 1947, wanted to make leatherworking tools affordable to the general public. He asked Sturdy to make the first set and proposed an initial production run of 5,000 sets. Sturdy opined that 5,000 sets would never sell, but leatherworking soon caught on.

Davenport says the craft is healthier than ever today. The popular Comic Con gatherings of cartoon and fantasy fans are partly responsible for a recent surge in leatherworking popularity as enthusiasts try to re-create their favorite figures and invent new characters in leather. If you’ve already seen the museum, don’t hesitate to return. Davenport says the display contains only half of Tandy’s overall collection, and the museum continues to expand its exhibits. Plan on spending some time to marvel at the detail of the leather artists’ works. As Al Stohlman once said, “I have often been asked what it takes to create a leather picture. More than anything else, it takes ideas. And being a realist, I feel a picture must be authentic in detail, so it takes time. Lots of time.”