As the first African-American woman elected to the U.S. House of Representatives from the deep South, Barbara Jordan faced adversity on her road to success, but she did not let society’s limits define her. 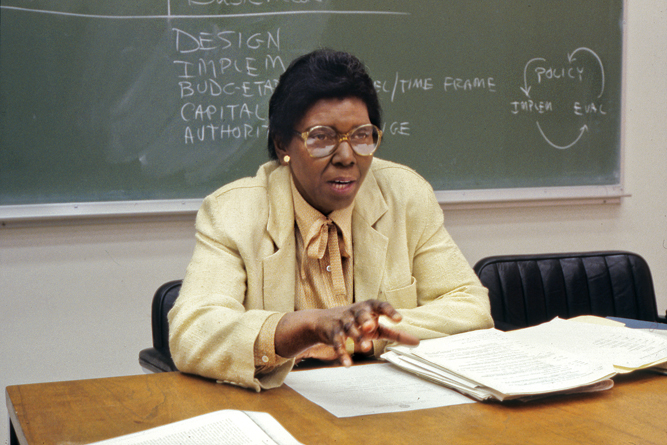 Noted as a captivating lecturer, Jordan taught political values and ethics courses at the LBJ School of Public Affairs at UT following her time in Washington, D.C (Photo by John Shurstedt).

As the first African-American woman elected to the U.S. House of Representatives from the deep South, Barbara Jordan faced adversity on her road to success, but she did not let society’s limits define her.

Born on February 21, 1936, Jordan grew up in the Fifth Ward of Houston while segregation still gripped the state. Her father, Benjamin, was a Baptist minister and raised Jordan and her two sisters with strong moral values. But it was Jordan’s maternal grandfather, John Ed Patten, who shaped her characteristic traits of confidence and perseverance.

“He had a significant influence on her life,” says Max Sherman, Dean Emeritus of the Lyndon B. Johnson School of Public Affairs at the University of Texas at Austin and colleague of Jordan’s while in the Texas State Senate and at UT. “He told her she could do anything she wanted to do. She developed a toughness of spirit and knew she could do anything in spite of any obstacles.” Jordan displayed this attitude in everything she did, from high school debates through her influential years in the government.

Jordan possessed excellent public-speaking skills from a young age. While at Phillis Wheatley High School in Houston, she placed first at the Texas State Ushers Oratorical contest and continued on to win the national oratorical contest in Chicago. Jordan graduated with honors and attended Texas Southern University in Houston, where she excelled at the debate team and defeated students from Harvard and Yale, among other prestigious schools.

Barbara Jordan knew what it was to over­come adversity. It was the heart and soul of who she was.

“She learned that she had to fight for herself,” says Sherman. “She went to the national debate tournament and won, but going and coming had to sleep in ‘colored only’ hotels, eat in ‘colored’ restaurants, and drink from ‘colored’ water fountains. She knew what it was to overcome adversity by her own will. It was the heart and soul of who she was.”

After receiving her bachelor’s degrees in political science and history, Jordan enrolled at the Boston School of Law and graduated in 1959. She was one of only two women to graduate that year, both of whom were African American. Jordan passed both the Massachusetts and the Texas bar examinations that year and received her license to practice law in both states.

Instead of taking work as a lawyer in Massachusetts, Jordan returned to Houston but had difficulty finding a position. Linda Ferreira-Buckley, a UT-Austin rhetoric and English professor writing a book for UT-Press on Jordan, notes that even though laws had changed, discrimination hadn’t.

“She knew winning at a debate tournament was not the same as persuading others to take action,” Ferreira-Buckley says. “Laws could be passed, practices could be found illegal, but that didn’t necessarily eliminate the illegal actions, nor did it change racist attitudes. She realized the need for education and persuasion to get people to change their views.”

So Jordan start-ed a law firm out of her parents’ basement in Houston. She supported the Kennedy-Johnson presidential campaign in 1960 and encouraged African-American constituents in her area to get out and vote. The result was the largest black voter turnout in Harris County history.

Jordan ran for a seat in the Texas House of Representatives in 1962. She was unsuccessful, and failed again in 1964, but her perseverance eventually paid off. In 1966, Barbara Jordan became the first black person since Reconstruction to be elected to the Texas State Senate and also the first woman to serve in that position. During Jordan’s tenure in the State Senate, she set minimum-wage standards, rid business contracts of discriminatory language, and worked on environmental legislation.

In 1972, Houston voters elected Jordan to the United States House of Representatives. Once in Washington, she called on the help of fellow Texan Lyndon Johnson to secure a spot on the Judiciary and Ways and Means committees.

When the Watergate scandal came to light in 1974, Jordan called for Nixon’s impeachment.

“My faith in the Constitution is whole, it is complete, and it is total,” Jordan said. “I am not going to sit here and be idle spectator to the diminution, the subversion, the destruction of the Constitution.”

When fellow committee members suggested that the evidence against Nixon wasn’t sufficient, Jordan replied, “Perhaps the 18th-Century Constitution should be abandoned to a 20th-Century paper shredder.”

After the shock of Watergate settled, Jordan turned her focus to ending discrimination in the government. In 1975, she spearheaded the expansion of the 1965 Voting Rights Act to include other minorities. She campaigned diligently for Jimmy Carter, and at the 1976 Democratic National Convention became the first woman and first African American to deliver the keynote address.

Although she belonged to the Congressional Black Caucus and occasionally attended meetings of the House women, Jordan did not attach herself to any particular agenda. Peers knew her as a diplomatic politician who sought common ground and compromise.

“On the floor of the Senate, she cared about her colleagues,” says Max Sherman. “She was very interested in helping you be a better senator. And our constituents couldn’t have been more different—I was from West Texas, in a traditionally conservative district, and there was a lot of open space. She represented the Fifth Ward of Houston. But she helped me be a better senator.”

In 1979, Jordan surprised many by leaving politics and accepting an offer to teach ethics at the Lyndon B. Johnson School of Public Affairs at UT. She continued to lecture extensively and acquired several honorary degrees and awards. While teaching, she served as ethics counselor to Texas Governor Ann Richards from 1990 to 1994 and sat on a United Nations Panel regarding transnational corporations in Namibia and South Africa. President Clinton appointed her to chair the U.S. Commission on immigration reform in 1994.

After Jordan passed away on January 17, 1996, of complications from multiple sclerosis (diagnosed in 1973), pneumonia, and leukemia, her achievements continued to break barriers. She became the first African American to be buried in the Texas State Cemetery in Austin. School districts named numerous public schools throughout Texas in her honor, and the school of public affairs at Texas Southern University bears her name. A bronze statue of Jordan with hands on her hips and a small smile on her face stands at 24th and Whitis streets on UT Austin’s campus.

Max Sherman collected quotes from some of Jordan’s former students as part of the introduction for a book on the Congresswoman’s speeches. “I’ve never met a person who believed so strongly that we can actually change the world,” says one. “That gives me confidence that we really can.”

“Despite the accomplishments on the front of her tombstone, the back of it only has one word: teacher,” says Sherman. “She wanted to be remembered as a teacher.”

From the September 2012 issue