At This One-Stop Shop and Community Hub in Hunt You Can Hear Live Music, Pick up a Six-Pack, and Even Mail a Letter

Written by Art Williams, Photographs by Will van Overbeek | From the May 2018 issue | Updated: November 5, 2018 | Filed Under: CultureThings to DoTRAVEL 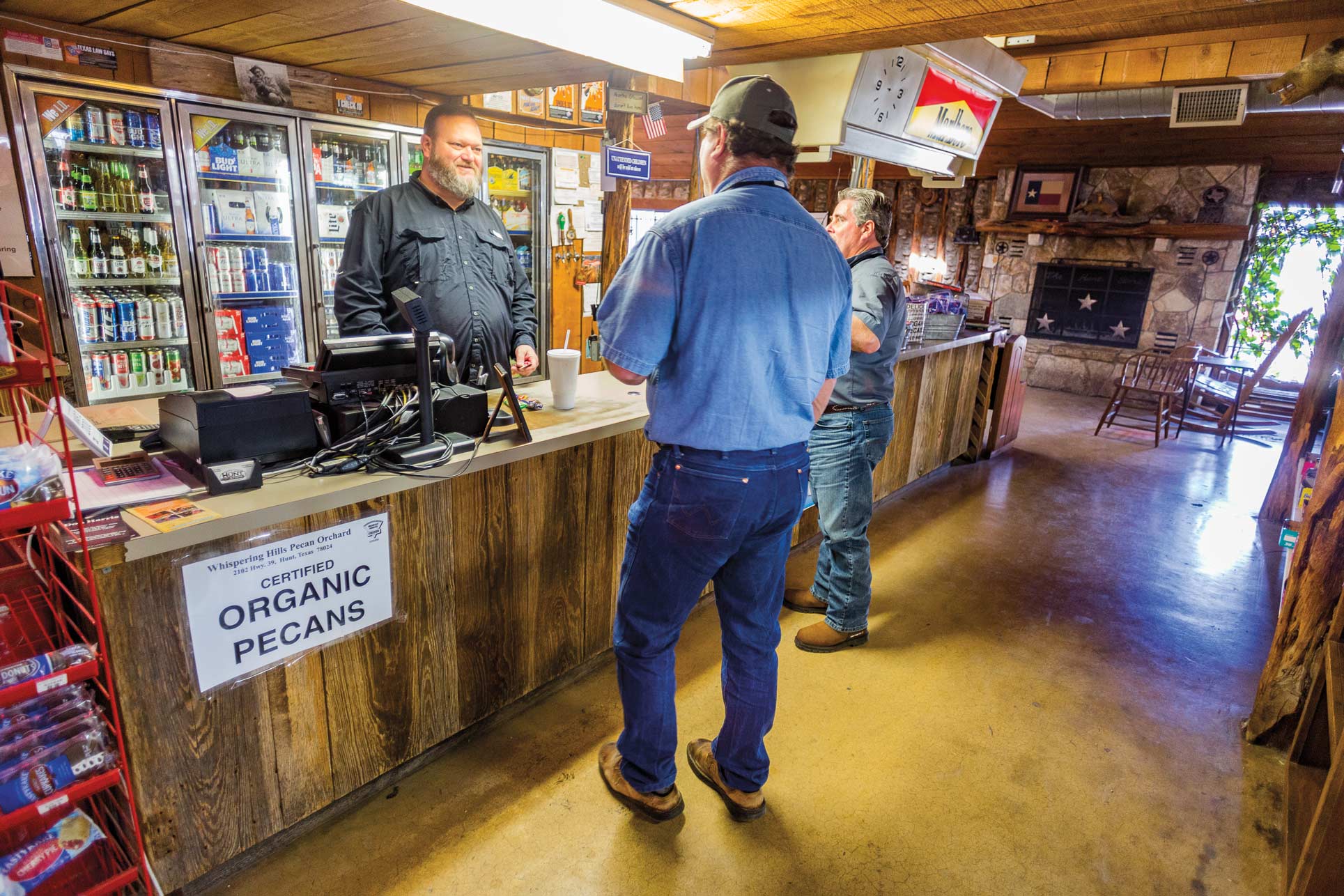 Where else can you buy organic pecans, six-packs of beer, breakfast tacos, boar-lard soap—and do your banking?

The Hill Country town of Hunt is a place of convergence—where the north and south forks of the Guadalupe River merge, and where residents rub elbows with out-of-towners at a local establishment that has stood the test of time.

Since its inception in 1946, The Hunt Store or “the store” (as it’s commonly called), has gone through several expansions and nearly a dozen owners. At first the store was a simple wooden structure stocked with groceries and provisions—a necessity for this rural enclave about 13 miles west of Kerrville along State Highway 39. Yet over the years tourists began to flock to the area, drawn by its pristine waters and scenic hills, as well as its growing number of riverside resorts and hunting ranches. To meet the needs of its changing clientele, the store gradually expanded its facilities and diversified its offerings. Today, The Hunt Store still serves as the only grocery store and gas station for the town, but it also encompasses a bank, a café, a real-estate brokerage, and a stage for weekly live music.

“The locals will let you know that you don’t own the store, you are just a steward for as long as you have it.”

The store’s various additions and improvements are courtesy of a string of successive owners—11 in all. In 1949 the original owner installed newfangled refrigerated lockers, allowing residents to rent out storage space for their surplus beef and venison. In 1971 a subsequent owner rebuilt the store’s walls using cedar posts and stacks of river stones hauled from a nearby creek, turning the facade into an eye-catching roadside attraction. Four years later, another owner added two smokehouses and a meat-processing service. In 2006 yet another granted permission for the Bank of the Hills to open a branch within the store. The teller windows are directly across from the seating area for the popular Hunt Rock Café.  According to longtime patron and current owner John Dunn, who took over in 2013, “Executives from the bank say it is the only one in the nation where you can drink beer and do your banking.” 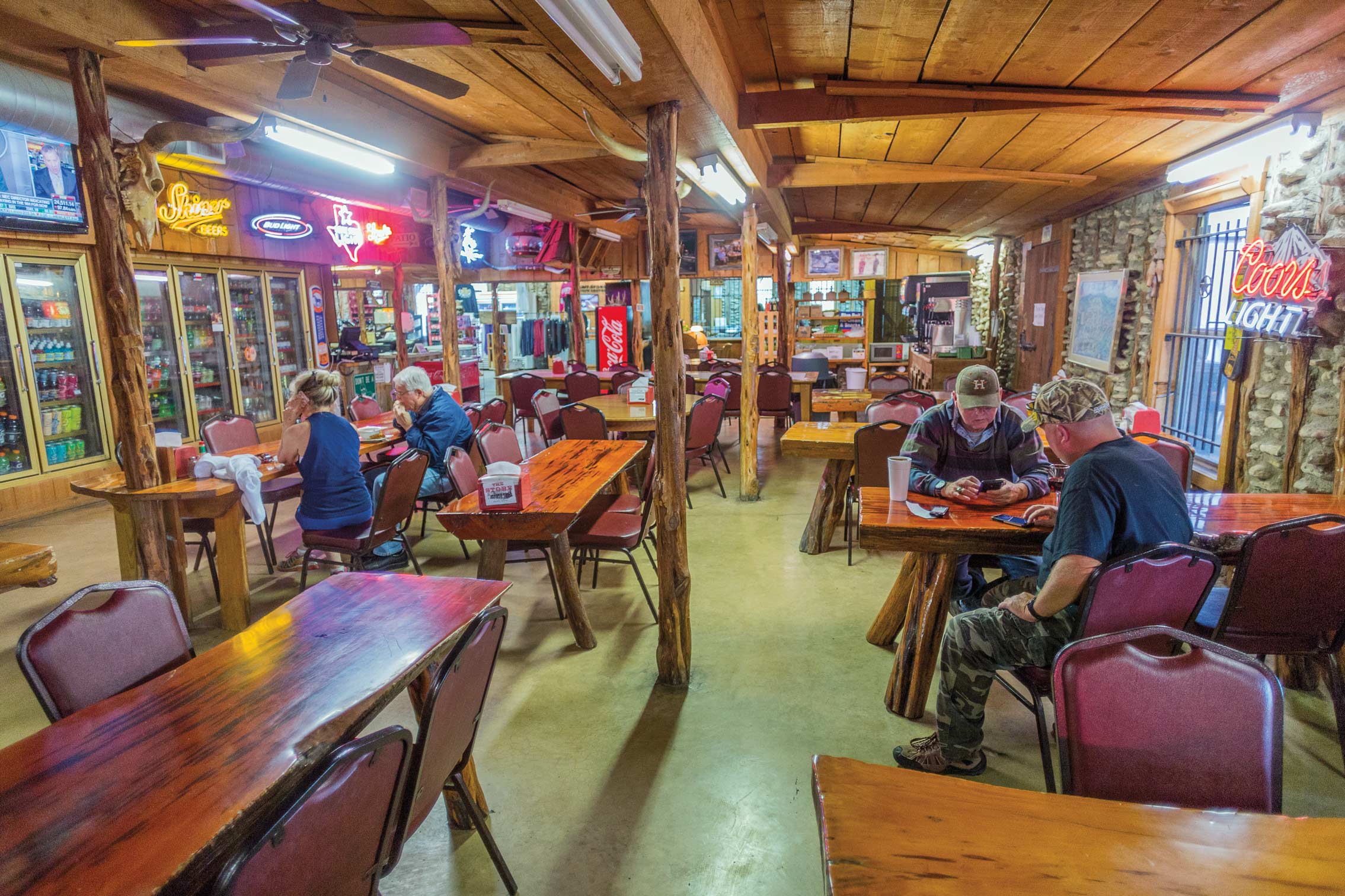 The café here—a popular spot for breakfast and lunch­­—offers a creation called the “French Taco,” which is a burger wrapped in a flour tortilla.

Although the store no longer processes meat, its café has plenty of Texas-raised beef and local game on the menu (and plenty of taxidermy on the walls to boot). In the morning, in addition to the standard selection of breakfast-taco fillings (egg, potato, cheese, chorizo), the café serves a tortilla stuffed with spicy sausage made from wild boar and venison mixed with jalapeños and cheese. At lunch, it offers the usual lunchtime fare of burgers, chicken-fried steak, and barbecue, along with some unexpected dishes, such as “Texas Toothpicks” (a heaping pile of deep-fried jalapeños and onions) and the “French Taco” (a burger inexplicably wrapped in a flour tortilla). “No one quite knows why it’s called ‘French,’” Dunn muses. Another option is “Bob’s Burger,” named for a previous owner, which comes loaded with jalapeños, mushrooms, grilled onions, and blue cheese.

The Hunt Store still serves as the only grocery store and gas station for the town, but it also encompasses a bank, a café, a real-estate brokerage, and a stage for weekly live music.

Dunn’s own innovation has been to add a fine-dining experience every Wednesday through Saturday evening from 5 to 9 p.m. He helped develop a menu incorporating the region’s abundant wild game, including an appetizer of South Texas venison strips with cracked-pepper cream gravy, wild-boar-and-venison sausage, beef tenderloin, and grilled rib-eye steaks. Dunn’s other change has been to add a regular program of live music to the mix. Musicians have performed off and on at The Hunt Store since 1977, but Dunn added a stage to the covered back patio and instituted weekly concerts. Besides showcasing local talent, the store has hosted such Texas musical legends as Ray Benson, Kinky Friedman, Charlie Robison, Gary P. Nunn, and Billy Joe Shaver. Dunn has also brought local specialty items to the store’s shelves, such as Ox Hollow Honey (in two varieties, huajilla and Texas wildflower), Hippie Hollow Granola (extra crunchy with almonds, cashews, and pecans), and beef jerky produced just for the store. One of the more intriguing items is the Wild Boar Man Soap ($12.99), made from regionally sourced boar lard and scented with mountain cedar; an alternative for women called Silk Purse has a lavender aroma.

The changes Dunn has implemented have enhanced the store’s reputation as a roadside stop for tourists. Yet the store is still a grocery, after all—a place where you can dash in and pick up a loaf of bread or a six-pack of beer. Dunn says the store’s main purpose has remained the same, even as it has changed hands over the years: to serve as a gathering spot for the Hunt community, which numbers just over 1,000 people. “Hunt is an unincorporated town run by locals, and the Hunt store is the heart of the community,” explains Dunn. “The locals will let you know that you don’t own the store, you are just a steward for as long as you have it.” Area residents still congregate here every morning to get their fix of hot coffee; they drop in during the day to purchase supplies and do their banking; and they return in the evenings for dinner and a show. You can’t be all things to all people, so the saying goes. But you can certainly try, and the Hunt Store seems to be succeeding.