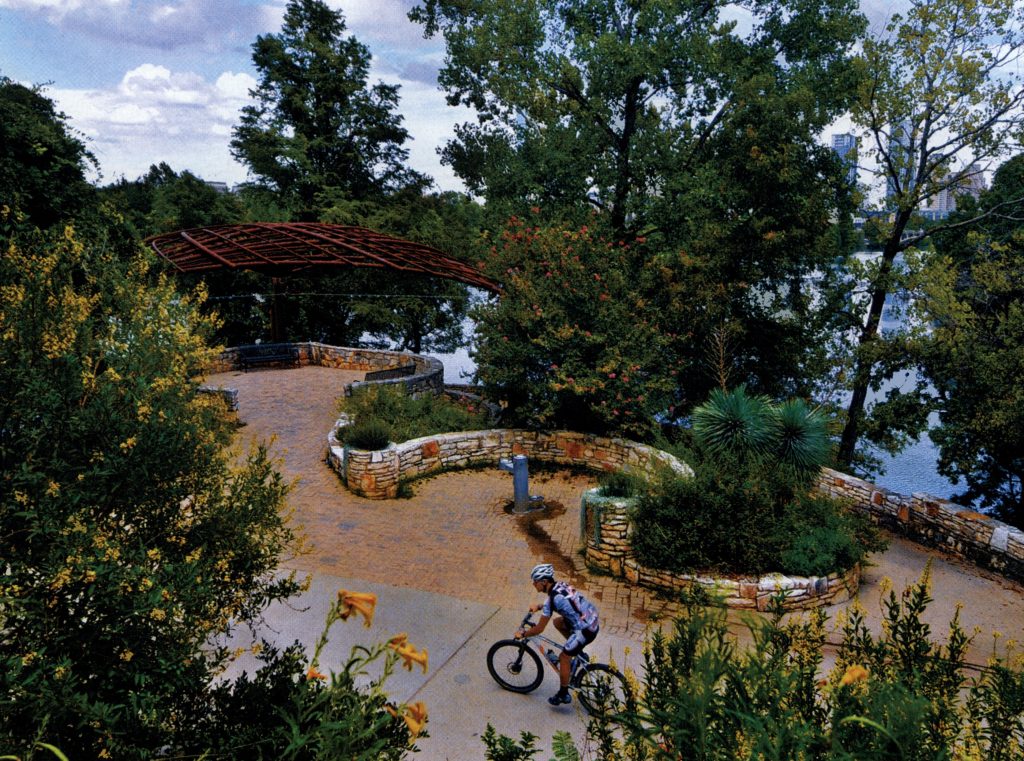 The stretch of the Colorado River known as Lady Bird Lake runs like a cool, refreshing drink through the physical and metaphorical heart of Austin. Its north shore winds along downtown, its south Zilker Park, and the lake is fed by the waters of Barton Creek and encircled by the wildly popular, 10.1-mile Lady Bird Lake Hike and Bike Trail. During my 30-odd years in Austin, I’ve spent many hours walking, jogging, cycling, and even pushing a stroller along the length of that often shady and always scenic trail. I favor a three-mile loop that runs between the Pfluger Pedestrian Bridge, at South Lamar and West Riverside Drive, and the pedestrian bridge under MoPac, where the expressway crosses the lake. I’ve dashed this route in less than an hour in running shoes. I’ve also lingered on it for an entire day, detouring at many points along the way, as I did recently with my 17-year-old daughter, Bridget, who spent time on the trail before she was born.

We started at Lift Cafe, a full-service bistro in The Bridges condominiums, at the corner of South Lamar and Riverside Drive, with a stout Ethiopian brew for me, a latte for Bridget, and breakfast tacos for us both. We ate on the patio so we could soak up fine fall weather. Then we asked cafe owners Tori and Tom Tinnon to pack picnic lunches for later: chunky, chicken salad sandwiches, creamy pasta salad, and a couple of Sweet Leaf Teas.

The rest of the day’s activities could easily be done on foot, but we headed a few blocks down the road to Barton Springs Bike Rental, where bright-red beach cruisers and black three-speeds come with basket, lock, and helmet. The shop also rents kid’s bikes, and its free shuttle service provides an easy out for tired cyders of any age. The shuttle will also pick up customers from just about anywhere in downtown Austin.

We rode west to the Umlauf Sculpture Garden & Museum, at the corner of Barton Springs and Robert E. Lee roads, where dozens of outdoor sculptures of children, angels, mythical figures, whimsical animals, and other subjects mix with oak, pecan, and cottonwood trees around a cattail- and lily-covered pond. Most are works by Charles Umlauf, a prolific artist and a professor at the University of Texas for 40 years. He and his wife, Angeline, lived in a home on the bluff overlooking what is now sculpture garden, and in 1985, they donated their homesite and several hundred pieces of sculpture to the city of Austin. At the time, the six acres below the bluff had fallen into a neglected state, and Austin philanthropist and civic activist Roberta Crenshaw led a group that raised money to transform the land and established a nonprofit that funds, manages, and maintains the facility. Crenshaw also deserves credit, along with Lady Bird Johnson, for saving Lady Bird Lake from commercial development and for the existence of the hike-and-bike trail.

Zilker Park, which begins just across the creek from the Umlauf, offered a wide choice of spots for our lunch-a picnic area overlooking Barton Creek’s cool, green waters; tables near a broad expanse of soccer fields; or other tables above Austin’s iconic Barton Springs Pool, whose constant-68-degree waters and 1,000-foot length attract swimmers even this time of year. But we opted to follow the hike-and-bike trail along the creek to the broad gazebo at Lou Neff Point, where Barton Creek flows into the lake. We ate perched on a stone wall under the wisteria-draped structure, enjoying an impressive view of the Austin skyline across the water, framed by the limbs of soaring cypress trees.

After tossing our lunch crumbs to the
geese and ducks patiently bobbing nearby, we hopped back
on our bikes and
rode to Zilker Botanic
al Garden. These 31 acres just
south of the lake
and trail contain a
variety of habitats
and gardens with
native and exotic
plants, including rose and Japanese gardens.
Our favorite corner of it, Hartman
Prehistoric Garden, houses a spread of
cyads and ferns that date back 100 million
years to the Cretaceous period, when
dinosaurs roamed the earth. The unusual
plants, quiet pools, and wide waterfalls
cascading over limestone cliffs lend an
otherworldly, back-in-time feel to the
Hartman. The dino-connection plays out
in an eight-foot-tall sculpture of an Ornithomimus
and replica of tracks made by
a real one, discovered in Zilker Botanical
Garden in 1992 and reburied for safekeeping
in a secret location somewhere
beneath the gardens. Petrified wood and
a sun shelter full of fossils complete the
prehistoric atmosphere.

Next, we stopped at the Rowing Dock, a few blocks west of the trail bridge under MoPac, and traded our wheels for kayaks. We paddled upstream, along fern-studded limestone cliffs and past towering trees and caves, occasionally startling a great blue heron into majestic flight. In about 30 minutes, we reached Red Bud Isle, a small, wooded island occupied by one of Austin’s most popular dog parks. A leisurely journey around the island and we were floating back toward the dock, past the University of Texas’ Brackenridge Field Lab, an 82-acre field research station supporting all manner of studies including fire ant control and algae as fuel.

Back on our bikes, we returned to the trail, crossed to the north side of the lake, and hung a right toward downtown. As we rode along, we stopped at scenic overlooks to watch ducks and swans, to check for turtles sunning on logs, and to admire some of the many cute dogs and babies also enjoying a day on the trail. After passing under Lamar Boulevard, we followed the winding ramp onto the Pfluger Pedestrian Bridge, a great place to take in Austin’s evolving downtown skyline, and the perfect spot to watch the sun set over the green hills of west Austin. Once the sun disappeared, we continued across the bridge and reluctantly turned in our bikes. All that rowing and riding had worked up our appetites, so we cruised “restaurant row” on Barton Springs Road, trying to choose between hearty Tex-Mex at Chuy’s, barbecue at Green Mesquite, juicy burgers at Shady Grove, or smoothies at Austin Java. Local establishments like these, the park, the serene lake, and the lively action on the trail itself all make Austin a place I love to call home.