And the Dance Goes On 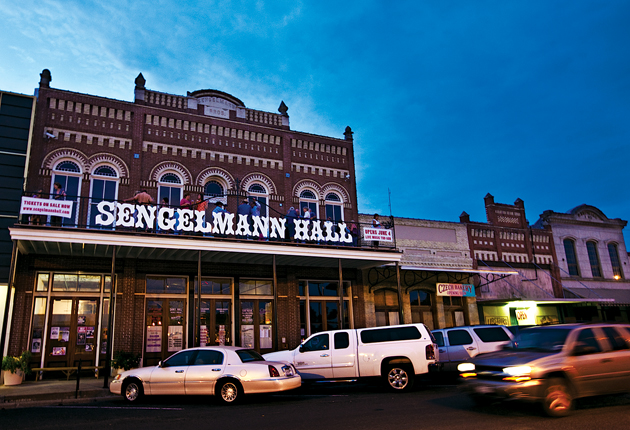 After a 70-year hiatus, ,this community landmark once again draws revelers from miles around. (Photo by J . Griffis Smith)

It’s easy to believe the rolling countryside around Schulenburg doesn’t look a whole lot different than it did in horse-and-buggy days. But make your way to Schulenburg any weekend, and you’ll have to look a little harder than in years past to find a parking spot in the historic downtown area. People come from surrounding counties, as well as Victoria, Austin, Houston, and San Antonio. They come … to dance.

They’re dancing on the same majestic dance floor that Schulenburg residents did more than a century ago: the 115-year-old longleaf pine of Sengelmann Hall. The upstairs dance hall in this resplendent, two-story building had gone the way of Miss Havisham’s mansion, filled with cobwebs, peeling paint, and even party debris from its last hurrah nearly 70 years ago. But, of course, this isn’t a story of last hurrahs.

First constructed in the late 1870s, then rebuilt in 1894 after a devastating fire, Sengelmann Hall had been closed since the early 1940s until it underwent restoration and reopened to a packed house in June 2009. Today, Sengelmann Hall hums with a vibrant energy as tangible as its stately brick walls. Family-style seating keeps the street-level dining room and saloon alive with banter Thursday through Sunday. To see the crown jewel—the actual dance hall—go through the inviting beer garden and head upstairs, where precious little has been altered. Nationally touring bands from throughout Texas (especially Austin) motivate hundreds of dancers around the spacious room. Young lovers two-step alongside couples who have been married for decades. The two groups smile at each other; love is not a generational thing.

On the dance floor, young lovers two-step alongside couples who have been married for decades.

Two-step country, Western Swing, and even Louisiana boogie enliven Friday and Saturday nights. On Thursday nights, honky-tonk piano man Earl Poole Ball, who played with Johnny Cash for more than 20 years, has a weekly gig in the dining room. Sunday afternoons are reserved for polka. 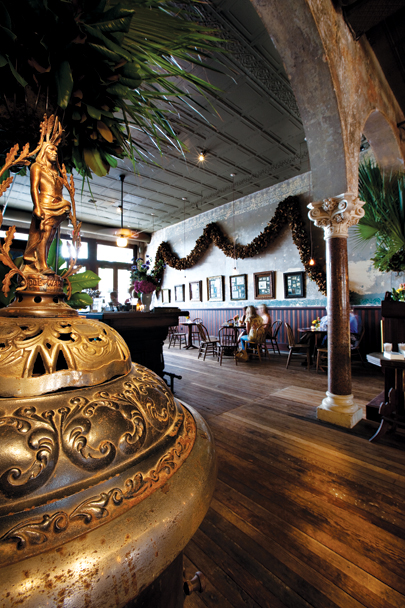 The lower level of Sengelmann Hall serves as a saloon and restaurant, where “pul-a-pul” cuisine is on tap; the actual dance hall is upstairs. (Photo by J. Griffis Smith)

Every aspect of Sengelmann Hall, in fact, embraces this region’s Czech and German heritage, as well as owner Dana Harper’s family heritage. His great-great-great-great-grandparents, Charles and Wilhelmina Kessler, were among the earliest settlers, arriving in the 1850s. Their granddaughter, Lillie Cranz, met Harper’s great-great-grandfather, oil wildcatter and Houston philanthropist Hugh Roy Cullen, in Schulenburg, where the two most certainly danced a night or two away.

While Harper went to great lengths during the restoration to preserve the original structure, the spiritual rejuvenation of the space received equal care. “It’s a Texas cultural legacy we’ve been handed,” says Harper. “This whole place is about tradition and roots, from the food to the drinks to the architecture, the music … and family.”

Steve Dean, former manager of the dance hall, finds the family aspect especially fascinating. Dean is cofounder of the nonprofit Texas Dance Hall Preservation (www.texasdancehall.org) and has spent six years researching Texas dance hall history. “Back in the old days, you’d get four generations in the dance hall,” Dean says. “They even had sleeping rooms sometimes where you could put the babies down.”

Dean’s exuberance in bringing this way of life back to life represents the feelings of all who are involved with the project. The everybody-knows-everybody chain of small-town life steered the quest for a high-caliber chef to Schulenburger Kenny Kopecky, who flourished for seven years at restaurants in Austin and Houston.

Kopecky collaborated on the Sengelmann Hall menu with Harper’s wife, Hana Hillerova Harper, a native of Prague. The resulting cuisine has been dubbed “pul-a-pul,” Czech for half-and-half—a nod to its Czech and German influences. Hillerova family recipes featured on the menu include the topinka (an appetizer made with homemade rye bread, skillet-toasted in duck fat, and spread with garlic paste), potato pancakes, a hearty goulash, and duck with bacon dumplings.

‘It’s a Texas cultural legacy we’ve been handed. This whole place is about tradition and roots, from the food to the drinks to the architecture, the music … and family.’

And while Sengelmann Hall itself warrants a trip to Schulenburg, this cultural treasure-trove awaits further exploration. Scenic, two-lane byways spoke out from Schulenburg with tiny, unincorporated communities popping up about every 15 minutes. The “Painted Churches” in these mostly Czech communities have been Fayette County’s calling card of sorts; they were even the subject of a PBS documentary in 2001. The buildings appear to be simple, country churches on the out­side, but an explosion of ornate color adorns the interiors, with murals covering every inch of wall and ceiling space. A guided tour from Schulenburg visits four of the churches, and several more lie nearby. Any local will gladly give you directions.

Though not on the official tour, one of the churches sits peacefully nestled in Moravia, 10 miles southwest of Schulenburg, where you’ll also find the Moravia Store. Here you can enjoy the other staple of early Czech life: beer. To say the friendly watering hole, built in 1889, has some character is like saying Texas has some cows—an understatement. There’s dancing every Saturday night, but chatting with the amiable locals provides sufficient cause for a visit any weekday.

Schulenburg offers a number of B&Bs and hotels, but in keeping with the historic theme, check out the Texana Trails and Lodge in Hostyn, about 15 minutes north of Schulenburg. The land is delicately dotted with Spanish and pin oak trees, though it was almost crowded with legislators and lobbyists. One of the lodgings—the ca. 1835 Historic Stonehouse—displays a Texas Historical Marker that reads, “In 1838, the Republic of Texas Congress voted to buy this land and the adjoining [league] as a location for the new capital, to be named ‘Austin.’ But President Sam Houston vetoed the bill.” You can learn more from Texana Trails’ owner, Lennie Brown, the great-granddaughter of the statesman who proposed this site for the capital.

Brown has noticed an increase in travelers since Sengelmann Hall opened, an observation echoed by several Schulenburg business owners. More importantly, the project seems to have injected a revitalized spirit, one that is spreading. The Texas Polka Music Museum will open in early 2010, as will the reinvigorated Schulenburg Historical Museum, which showcases town history and Native American artifacts.

While most of the interstate traffic continues to whiz by, more and more people are taking the time to discover that Schulenburg is not only a halfway point between Houston and San An­­tonio—it’s a bridge between two eras.