A Century of Seafood 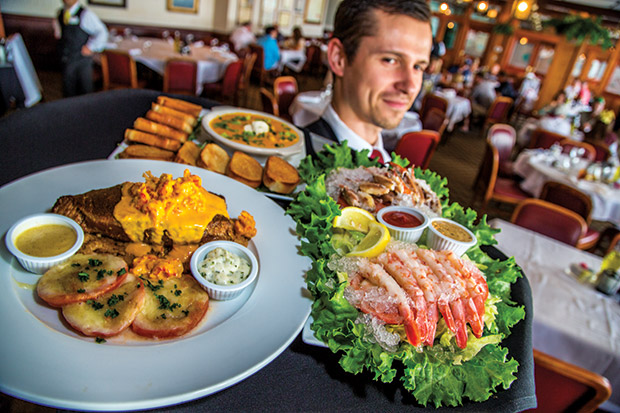 Not even 10 years old when my parents treated me to my first meal at Gaido’s, the famous restaurant on Galveston’s Seawall, I figured that the giant crab perched on the roof meant this was a very special place.

Gaido’s And The Pelican Club

My dad explained that Gaido’s had opened in 1911, was a legend in Texas dining, and had been his favorite eating destination on the Texas coast since he was my age. That day, my earliest definition of classic dining was formed as we sat down to white tablecloths and napkins and enjoyed fresh seafood served by waiters wearing starched shirts and bow ties.

Countless visits later, I’m returning to Gaido’s, still owned by the same family, to treat my husband to the place I consider the Texas Gulf Coast’s quintessential seafood spot. I’ve long since changed my concept of a classic to incorporate restaurants both fancy and very casual, and Gaido’s today falls somewhere between. Service remains solicitous and the tablecloths are still snowy white, but guests rarely dress up anymore for dining in the series of rooms that look much as they did in the 1970s.

The restaurant’s décor serves as a window into history, both of Galveston and the maritime world. Just inside the front door, we’re greeted by a splendid collection of antique brass-and-copper deep-sea diving helmets dating from nearly a century ago. Several dining room walls are covered with vintage photography, some documenting the building and rebuilding of the historic Seawall and others showcasing the magnificent Victorian architecture for which Galveston is famous.

Some of my favorite images include those illustrating the island city’s New Orleans-like cemeteries with above-ground mausoleums and crypts. But best of all is a prominent 1920s photo of smiling young women lined up on the beach and Seawall for the International Pageant of Pulchritude, a bathing-beauty revue that drew more than 100,000 spectators each year.

Arriving for Sunday brunch, we luck into a window table that gives us a view, albeit across the parking lot, of the Gulf. Looking around our dining area, I take in a sea of tables filled with young couples, grandparents with grandchildren, vacationing families, and the after-church crowd. Judging from those arriving with gift-wrapped packages, Gaido’s serves as a place for celebrations, too.

We’re delighted to find that Gaido’s offers a Bloody Mary bar during Sunday brunch. Once we’re given glasses holding chilled vodka and ice, we help ourselves to the self-service table and add tomato juice, horseradish, Worcestershire and Tabasco sauces, and garnishes of lime, celery, and olives. Then we throw in a few non-classic options, such as pickled okra, green beans, and pieces of crisp bacon.

We fashion our meal to include a few traditional dishes, as well as some newer offerings. I’m usually a fool for cornmeal-battered, fried oysters, which Gaido’s tops with chopped bacon and hollandaise sauce, but this time I’m tempted by a dish called Cy’s Demise, which features a dozen charcoal-grilled oysters finished with melted butter and grated Parmesan cheese.

A house classic is the shrimp bisque, a creamy soup made with a sumptuous seafood stock, shrimp, pureed tomatoes, and sautéed carrots and onion. Alongside, we find a good foil in the lump blue crab salad mounded atop sliced avocado and tomatoes, with tart, lemony remoulade sauce for dipping. A modern twist on sautéed Gulf catch, the sautéed golden tile filet—that’s a fish caught at a depth of 600 feet or more— was crusted in garlic and topped with shrimp, avocado, cilantro, and lime.

In the restaurant’s brunch-specific menu, we find dishes that marry traditional and modern ideas, such as the Oysters Benedict. Poached eggs crowning oysters on the half-shell are topped with spinach, tomatoes, and hollandaise. But I’m most drawn to the Crawfish Hash, a bed of skillet-fried potatoes blanketed in saffron-crawfish fondue and hollandaise made nubby with jumbo Texas lump crab.

One night during our Galveston stay, we dress up for a dining experience of the old-school classic variety at the Pelican Club, which is also owned by the Gaido family. The Pelican Club is attached to the rear of the Gaido’s spread, with its separate entrance on a street one block inland from Seawall Boulevard. Compared with the informal ambiance at Gaido’s, the Pelican Club evokes 1940s elegance, with subdued lighting, posh upholstery, and etched-glass details in the room dividers.

Waiting until our table is ready, we sip martinis at the sleek bar, a milky glass shelf that’s lighted from below to impart a soft vanilla glow. The music soundtrack—a little Sinatra, a little Ella Fitzgerald—evokes dinnertime of elegant eras past.

Dinner at the Pelican Club isn’t an experience we’d anticipated finding at the beach, but chef Ross Warhol’s resume doesn’t bear the usual suspects, either. His Culinary Institute of America education and work in kitchens from Spain to Napa Valley to Chicago imbued him with haute cuisine prowess, which he pairs with keen understanding of Texas and Southern cooking.

The Pelican Club menu finds everything from chicken-fried steak with a cognac-and-peppercorn-infused gravy to smoked-trout salad with confit potatoes and haricots verts as accents. Our favorite items during our Pelican Club dinner include poached halibut over a bright green sweet-pea mash, and seared, dry-aged rib-eye steak with tiny potatoes and dinosaur kale. Innovative and flavorful, the dessert of fennel mousse atop an olive oil biscuit with blackberry jam surprises and delights us both.

The two meals combine for two lasting impressions. First, we are reminded that we’ve overindulged yet again. But most of all, we come away knowing that a classic—in this case, the Gaido’s of both old and new definitions—never goes out of style.