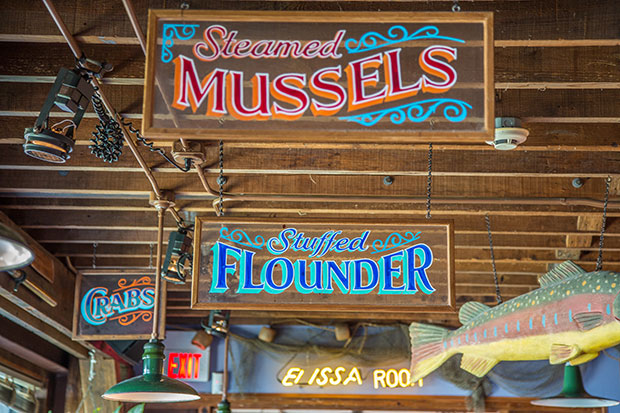 More than 600 miles of Gulf Coast landscape shapes one long, arching side of the state. And from those waters come hundreds of varieties of fish, from those favorite of the scaled sort—such as red snapper, black drum, flounder, mackerel, swordfish, and tuna—and plenty of shellfish, from shrimp and crab to oysters.

In recent years, the most eco-friendly chefs in Texas have become fond of preparing some “bycatch” fish, or those caught in nets while fishing for popular varieties but often thrown back because the public wasn’t familiar with them. If you see triggerfish, sheepshead, tilefish, or barrelfish on the menu, go for it. Chances are, you’ll find them now at some of the tried-and-true seafood restaurants you’ve loved since childhood. Readers are loyal to their Galveston Island and Galveston Bay fish cafes, as well as an interloper from San Antonio.

Part of the Landry’s Inc. chain with numerous seafood restaurant in Houston and Galveston, this cornerstone of the company does a lot of things well to keep its customers so happy. First, its setting right on the water at Pier 21, conveniently next to the cruise ship terminal and the beautiful, historic tall ship Elissa, couldn’t be more scenic. From a waterside table, watch boats come and go while enjoying massive platters of oysters on the half-shell and peel-and-eat shrimp, as well as fried goodness like crab cakes, calamari, and the signature “shrimp kisses,” shrimp stuffed with jalapeño-jack cheese, wrapped in bacon and fried. Shrimp-andouille sausage gumbo, clam chowder, and crab-lobster bisque figure among the soups, while popular shellfish items include Dungeness crab and baked scallops. For lighter options, consider grilled rare tuna or shrimp ceviche.

A popular stop if you’re visiting the nearby San Jacinto Monument, this destination restaurant on the Ship Channel between Houston and Galveston has survived a devastating fire and a complete flood during Hurricane Ike. Favorite dishes include those made with shrimp—the restaurant serves some 80,000 pounds of it each year—as well as catfish, crawfish, tuna, and redfish.

Run by the same family since its opening in 1911, this quintessential seafood restaurant offers a look at Galveston history in a superb collection of historical photographs. The collection of several dining rooms gives you plenty of options for seating to enjoy old favorites like fried stuffed shrimp and stuffed flounder, as well as newer ideas, such as pecan-crusted catfish topped with jumbo lump crab meat poached in lemon beurre blanc.

Being landlocked certainly hasn’t hampered the growth at this Alamo City favorite, which first opened in 1965. Six locations now offer ample opportunity for you to enjoy coconut shrimp, shrimp linguine, and Mexican-style shrimp cocktail, as well as chipotle fish tacos, grilled salmon steak, and broiled rainbow trout. “No place on the Gulf Coast comes close to the great taste and price,” says Veronica Pais of Rockport. “The lemon pepper fish and grilled shrimp are my favorites,” adds Mike Millhollen of Helotes.

Sitting on a point that juts out into Galveston Bay, this waterside gem invites you to bring your catch in to be fried or grilled—“You hook it, we cook it.” Otherwise, pick crab-stuffed jalapenos, smoked swordfish dip, or seared rare tuna over avocado slices from the appetizer list and grilled redfish, blackened catfish ettouffee, shrimp brochette, fried oysters, and soft-shell crab from the entrees menu.