It’s easy being green at Zhi Tea in Austin 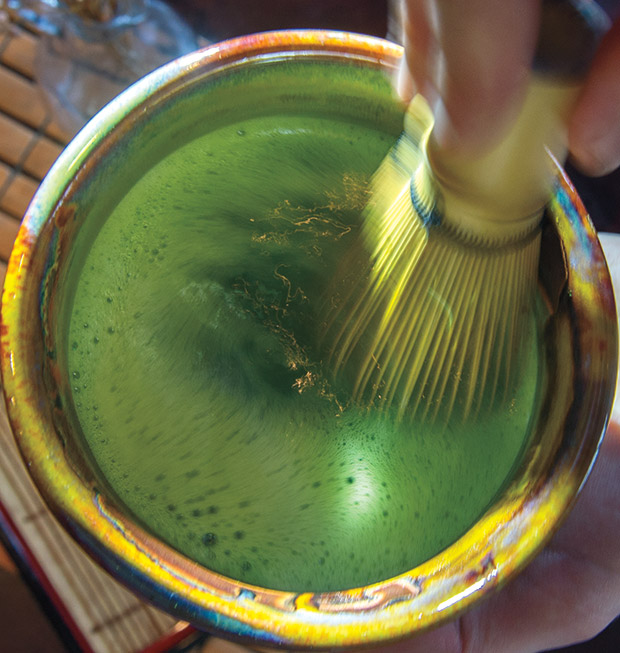 The latest trend in green tea, matcha has a creamy mouthfeel, tastes slightly sweet, and is packed with antioxidants.

Just when it seemed like coffee couldn’t get any hotter, a green alternative started to emerge in cafés all over the country—matcha, a type of green tea that has been popular in Asia for centuries. The American coffee community has begun to embrace this time-tested caffeinated beverage for its vibrant earthiness, health benefits, and ability to calmly energize.

See texashighways.com/drink for more spots to find matcha in Texas.

While entire cafes dedicated to matcha have popped up on the east and west coasts, matcha is finally stepping into the Texas limelight—and that has a lot to do with Zhi Tea. The Austin-based wholesale and retail tea shop has been spreading the good word of tea since 2007, when Zhi started selling its organic tea blends online. In 2008, Zhi opened the doors to its eastside tea house. These days, Zhi Tea is one of a few tea purveyors in the state actively educating restaurants and coffee shops on the tradition of matcha.

Unlike most teas, which are infusions of tea leaves in hot water, matcha is produced by grinding dried whole green tea leaves, then briskly whisking the powder into a ceramic bowl of hot water that’s around 190 degrees Fahrenheit, creating a frothy and creamy drink that is simultaneously earthy, vegetal, and slightly sweet.

Zhi Tea owner Jeffrey Lorien visited Japan two years ago to tour the farms and factories where matcha is grown and produced. Later, one of the families that sells Zhi tea overseas came to Texas to perform a traditional tea ceremony for Zhi employees. The family also demonstrated an abbreviated preparation process that could work in a fast-paced café, and Lorien trained his staff in the simplified method of making a tasty cup.

“Everyone’s always looking for these new, great-tasting, healthy things,” says Lorien. “And if matcha’s not the healthiest beverage on the planet, it’s certainly one of them.”

While some green teas are culti-vated in open fields beneath full sunlight, matcha is partially shaded for several weeks before being harvested, which causes the plant to produce additional chlorophyll and pull more nutrients from the soil.

“That also gives it a full-bodied, umami flavor,” explains employee Melanie Mock. “And matcha is unique because it’s ground from the entire leaf. So, when you drink it, you’re getting the entire leaf and all of its nutrients.” Matcha also has high levels of l-theanine, an amino acid that complements caffeine to produce a sense of calm and focus without the jitters associated with coffee drinking.

“The reason that tea affects you differently than coffee, other than having less caffeine, is that it has l-theanine, which is a huge component in the tea experience,” explains Lorien. “It allows people to be awakened from the caffeine, but focused
and relaxed.”

In a past life, this self-proclaimed “tea guru” was actually a coffee junkie—until he started experiencing acid reflux, crankiness, and major energy crashes. “Tea has literally changed my life, which is why I start-ed a tea company,” says Lorien. “The magic of tea is that it’s one of the easiest things to incorporate into your lifestyle with the most benefits.”

Lorien says that the antioxidant-rich green tea continues to rise in popularity, and fortunately for consumers in the United States, Japan is focusing on exports rather than the Japanese market, which helps keep prices stable.

“The young people in Japan want coffee now—surprise, surprise!” says Lorien. “It’s more Western, it’s more cool, it fits their lifestyle, and they work their butts off. Tea is considered their grandparents’ stuff now. So instead of trying to convince young people to drink tea, Japan has decided to increase exports.”

Located at the intersection of Springdale and Bolm roads, Zhi Tea offers something that can’t be found anywhere else in town: a traditional matcha bowl prepared tableside.

“Even Japanese restaurants and cafes aren’t doing it yet!” says Lorien. “But ‘yet’ is the good news. That’s where we come in! Part of the whole experience of Zhi Tea is education. Everyone here is trained to help people through the journey of tea—demystifying it while keeping it fun.”

“I was talking to this one customer, and he said he likes the experience of drinking it out of a bowl and having both of the sides of his body engaged,” she says. “Part of what a tea ceremony is about is having a balance between the left and the right side so you are grounded while you’re drinking.”

Malone says she is looking forward to experiencing her first tea ceremony in Japan soon; meanwhile, the Zhi Tea team continues to learn more about the history of tea. Colleague Melanie Mock is currently immersed in a book about the intricacies of the traditional Japanese tea ceremony. “That’s what I like about tea—there’s so much history and meaning behind it,” she says. “You’re never done learning.”