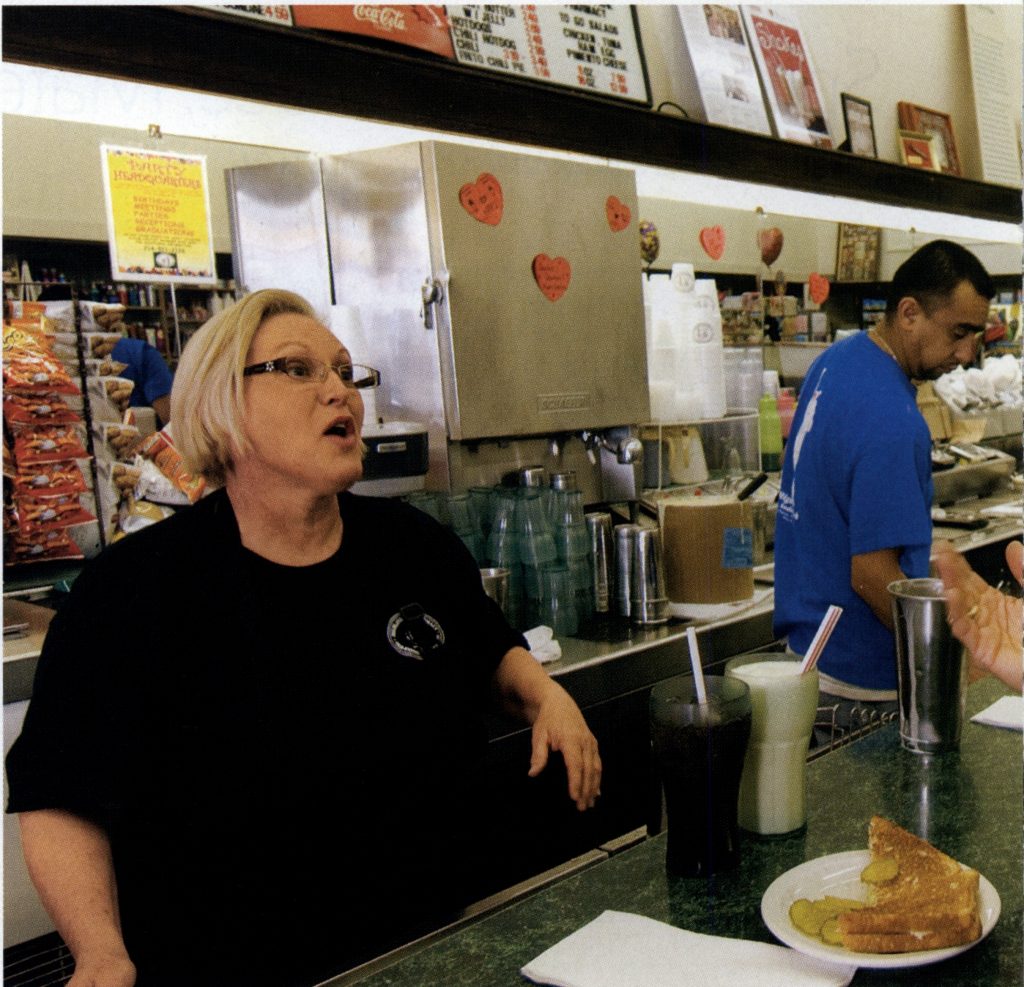 Easing onto one of the shiny spindle stools at the soda-fountain counter inside Highland Park Pharmacy, I fight the urge to tuck in my feet and elbows and twirl the seat around. When I frequented this hallowed treat-stop as a child with my grandfather, that was acceptable—even approved—behavior.

The memory is as vivid as those I have of the little red coat I loved to wear and the beribboned braid that hung down my back from neck to waist. Such impressions burn brightly for everyone, it seems. I’ve brought my mom along today, and as we settle into the familiar setting, I watch her slip into habits she developed when she visited the Dallas landmark as a girl in the 1930s and 1940s.

The long, narrow space is exactly as it’s always been, with a big mirror running the length of the soda fountain that spans the east wall of the room. As when each of us was a child, we still choose stools that allow us to look out the storefront’s giant picture window, which lets in sunshine and provides a glimpse of traffic zipping past on busy Knox Street.

I ask Mom what she’s ordering for lunch. “Well, a chicken-salad sandwich,” she replies, looking a little like I must have lost my mind to even wonder. “On wheat, and grilled, of course.”

She’s in good company, as legions have made that choice a bestseller since H.S. Forman opened his pharmacy in 1912. Anchoring the corner of Knox and Travis streets in what’s called Old Highland Park, the brick facade, which is the color of yellowed newspaper, has changed not one bit.

Neither has much inside, for that matter. Pharmacy Manager Mary Duncan says the counter and black vinyl-topped stools are original; they’ve just been recovered through the years. “We even have one of the old cash registers on display,” she adds. “But it doesn’t work anymore.”

Pharmacists still fill prescriptions in the back, and you can still buy specialty health and beauty items, but it’s the delicious breakfast, lunch, pastries, and other desserts that bring the many customers who crave a taste of yesteryear, a hint of uncomplicated moments.

“Shelby loves sitting at the counter and drinking chocolate milk, made with real chocolate syrup. And she really likes the cinnamon rolls that are as big as her face,” says Sawyer, whose own passion is the fountain’s irresistibly sweet pecan waffle. “You know exactly what you’re going to order before you walk in. Just being here gives you the sense of a simpler time.”

The real regulars are those who visit the pharmacy every day, says Duncan, who notes that some patrons eat meals here twice daily. Among the best customers is Norman Andres, who hires a taxi or driver to bring him daily for breakfast and then either for lunch or early supper. His favorite menu item? A pimiento-cheese sandwich called the Palm Beach.

“Everything they make here is good. And I like the atmosphere and the people,” says Andres, who first visited the pharmacy in 1948.

Duncan says that when the weather turns icy, the pharmacy will deliver meals to their regulars. “They’re pretty sweet,” she adds. “They love telling us stories of coming here since they were children. When we lose one, it really does hurt.”

Like Mr. Andres, I count the Palm Beach my favorite nosh at the soda fountain. A grilled pimiento cheese-on-rye, this specialty brings a happy sigh from my core, thanks to its crunchy exterior and smooth, cool interior. Nobody knows why it bears that name, but I think it’s because the sandwich pairs perfectly with an old-fashioned chocolate malt, altogether a rich adventure from start to finish.

Duncan says the pharmacy has changed hands only four times over the years—the owners are now Sonny Williams and his wife, Gretchen Minyard Williams, she of the grocery family—and nobody has found reason to remove anything from the menu. The only menu changes have been additions, such as an egg salad sandwich, Frito pie, chili dogs, pinto beans, freshly baked cookies, and a bacon-egg-and-cheese breakfast sandwich. Top-sellers are grilled cheese, the chicken salad sandwich, and the Palm Beach, along with ice cream sodas and milkshakes.

Those lunch items are offered all day, right until closing. Breakfast options range from scrambled eggs with toasted bagel to eggs Benedict, served until 1 p.m. on Sunday, and until 11 a.m. other days. And should I worry that my Palm Beach craving will hit at night, I can now pick up containers of pimiento cheese, along with chicken, ham, tuna, or egg salad, to go.

Duncan says that some weeks the waitresses write up as many as 2,000 tickets. The busiest day remains Saturday, when the soda counter is crowded and the scattered tables with chairs stay full, too. Service can be brisk, and loitering to soak in the nostalgia is tricky. Instead, I like to go midafternoon on a Tuesday or Wednesday, when the pace slackens and I can dawdle over an old-fashioned Coke float.

That’s the case when I make a return visit by myself the following week. Besides me, only three or four customers sit at the counter, and they’re mostly reading magazines and enjoying a quiet moment away from the hubbub of the modern world rushing past the front window. Maybe nobody will mind if I twirl around on my stool.