The Scene in Gruene 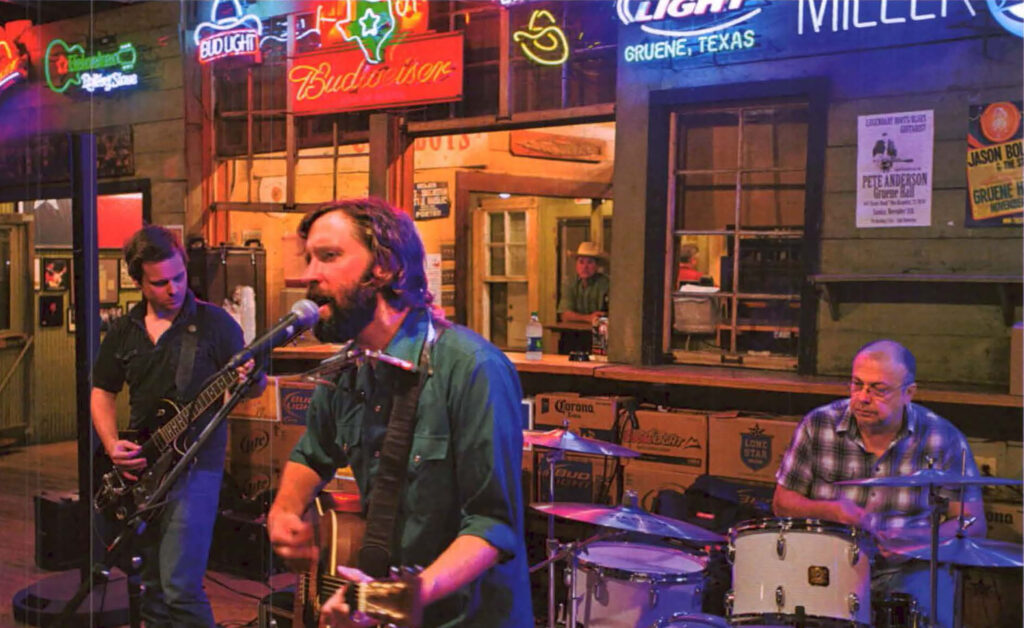 “I love traditional music—old songs that cross time and space to tell you what people cared about,” says Austin-based singer-songwriter Owen Temple.

Seated at an oak-shaded picnic table overlooking the Guadalupe River, I’m digging into a tenderloin-and-spinach salad at the Gristmill Restaurant in the Gruene Historic District of New Braunfels and wondering what it must have been like here at the turn of the 20th Century. No composed salads or Herradura margaritas, I’m betting—but there would have been plenty of cotton in the area, and all of it would have been ginned right here in Henry D. Gruene’s gristmill, the bones of which today form the restaurant.

Cotton was once King in Gruene, as it was in much of Texas, and cotton is what inspired an ambitious Henry Gruene—the second son of German immigrant Ernst Gruene—to bring in dozens of families in the 1870s to sharecrop the 6,000 fertile acres his family bought along the river. Eventually, Henry Gruene built homes, a post office, a general store, a bank, and a dance hall to cater to the men and women who provided the muscle for his cotton enterprise. By all accounts, the town thrived (and H.D. made a fortune) until the boll weevil blight made a wreck of things in the 1920s and ushered in a slow decline.

Today, though, the entire commu­nity—the 1878 dance hall and iconic Gruene water tower, dozens of shops and restaurants, a few hotels and B&Bs, a small winery, a day spa, and a serpen­tine, captivating stretch of the Guadal­upe River—is listed in the National Reg­ister of Historic Places. The entire his­toric district is easy to explore on foot; you can amble from one end of the dis­trict to the other in less than 15 minutes. In fact, Gruene still doesn’t have (or need) a traffic light

“We don’t have a museum here in Gruene,” says Dee Buck, co-owner of Buck Pottery, “so I always tell people to go over to Gruene Hall and look at the photos of all the people who have played there.” Dee and his wife, Terry, arrived in Gruene in 1982 and trans­formed H.D. Gruene’s storage barn into a pottery and retail shop. “That old dance hall is the heart and soul of this place,” he says. 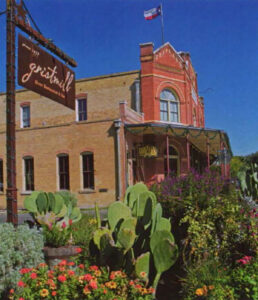 Prickly-pear cactus and native cenizo brighten pathways throughout the Gruene Historic District. In the background is the Gruene Antique Company.

Dee Buck speaks the truth. Push open the squeaky screened door of Gruene Hall into the bar area, in fact, and you’ll find at least 100 signed photographs of musicians who have played the hall over the years. Here is a veritable col­lage of country-music and rock-pop roy­alty, including publicity stills of Jimmie Vaughan, Lucinda Williams, Buddy Guy, Merle Haggard, Lyle Lovett, Rosie Flores, Little Feat, Jerry Jeff Walker, Chris Isaak, and a young George Strait, who first played here with his Ace in the Hole band in 1975, when the hall reopened for business after a long slumber.

Gruene visionary Pat Molak kick-started the district’s rec very in the mid- 1970s when he and business partner Mary Jane Nalley bought the dance hall and began to restore the s rounding build­ings, including the old gristmill. ”We had our big coup in the fall of 1975,” Pat says.

”We had been having dances for four months, and we were hearing about a band in San Marcos called the Ace in the Hole band, led by a fellow named George Strait. We hired them for 150 bucks. They played here until the early 1980s, when George got his contract in Nashville.”

“That was an interesting time,” says Dee Buck. “Terry and I happened to visit Gruene in 1982, and we met Pat and Mary Jane, who had been buying up buildings and starting to lease them. They had already restored the gristmill and opened the restaurant, and of course there was Gruene Hall. We eventually decided to take a look at the old barn. There’s a con­nection to history in Gruene that mirrors why we’re attracted to the craft of pottery, which speaks of how people lived their everyday lives.” 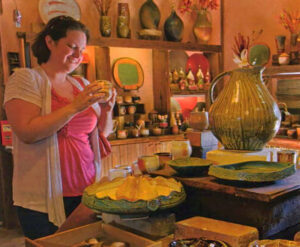 The handmade wares at Buck Pottery—made from Texas clay—cre­ate a tangible link to place and history.

There’s a comforting and invigorating juxtaposition of old and new in Gruene, where pink feathered boas and bedazzled Harley-Davidson sun visors are as easy to come by as vintage cowboy boots and 1930s apothecary jars. And despite the historic district’s lack of a formal entity dedicated to telling its history, it’s easy to find evidence of 19th-Century Gruene if you know where to look—and listen.

Since most of the buildings here were built more than a century ago, wooden floors throughout the district squeak pleasantly beneath your footsteps; out­side, gravel pathways trimmed with pur­ple plumbago and lantana crunch rhyth­mically as you stroll from shop to shop. Inside the Gruene General Store, along with Davy Crockett coonskin caps and dis­plays of personalized license plates, you’ll find a stack of vintage mailboxes that attest to the structure’s beginnings as a post office.

Across the street, amid the wooden boat pro­pellers, 1933 Chi­cago World’s Fair guides, malted­ milk tins, and old postcards at the Gruene Antique Company, you can spy the gold-and­-black Victor Safe & Lock Co. vault that remains from the building’s days as a bank. The two-story Victorian Gruene Mansion Inn—once the home of Henry Gruene and his family—boasts broad, wraparound porches and a vintage Zenith radio in the dining room.

And down the street, the restored former home of Henry Gruene’s young­est daughter, now the site of Black Swan Antiques, is said to be haunted. “I’ve never encountered a ghost myself,” says shop owner Jim Benson, “but we’ve had quite a few reports. Most recently, we had an antique English kitchen scale in the back room, and customers told us the weights started bouncing. Another time, employ­ees told me that they heard a bang, and that a 1920s minnow bucket appeared to have been thrown across the room.” 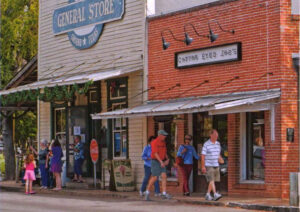 The entire Gruene Historic District is easy to explore on foot.

Perhaps that particular ghost simply wanted to go fishing: It’s hard to imagine that Gruene’s original founders would be unhappy with how things have turned out in their town. There’s live music here seven days a week, plentiful dining and drinking spots, river recreation in the warm months, and shopping opportuni­ties to reflect nearly every aesthetic.

“Gruene is about rust and dust,” says Pat Molak. “Even as we expand, we use recycled and reclaimed materials, bury utility lines, landscape with native plants, and try to keep the old feel. If you sit on a bench in front of the dance hall facing the old mercantile building, you’ll forget what year it is.”