Boat and Fish the Friendliest Lake on the Texas-Mexico Border

Amistad Reservoir is an international oasis

Written by Art Williams, Photographs by E. Dan Klepper | From the December 2018 issue | Updated: November 28, 2018 | Filed Under: LakesOn the Water 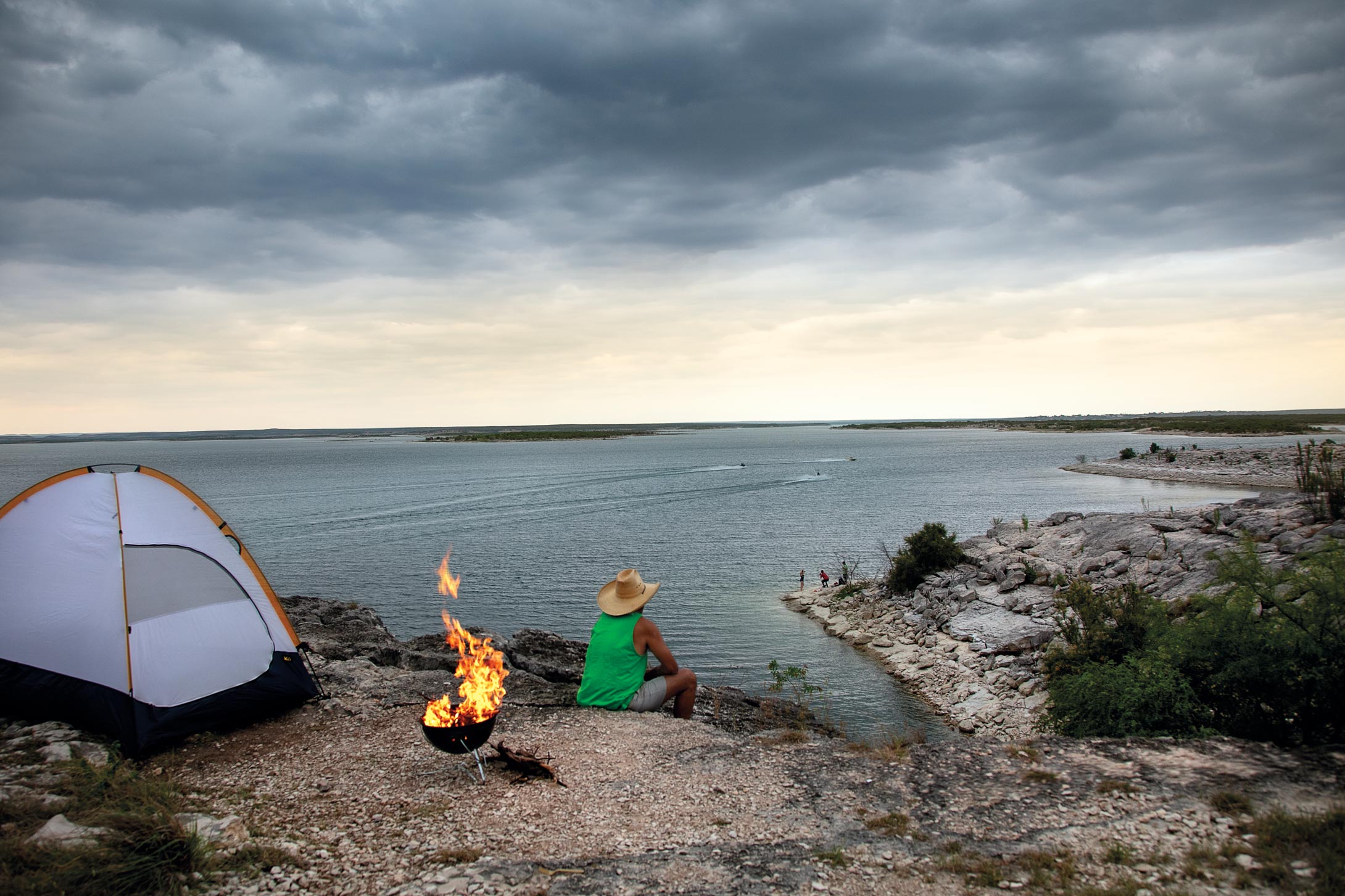 Camping above the shores of Amistad Reservoir at Amistad National Recreation Area in Del Rio.

The Texas badlands east of the Pecos River and along the state’s border with Mexico bristle in thorn-covered plateaus and jagged limestone canyons. But after spring rains, the country often reveals a softer side, blushing with Texas sage blooms. The sage grows on both sides of the Rio Grande, clinging to crevices, thriving among the flats, and populating the rocky shores of Amistad Reservoir, home to Amistad National Recreation Area and ground zero for the most important shared resource in badlands territory—water.

Amistad—“friendship” in Spanish—blurs the two countries together, submerging the border beneath several hundred feet of water, a uniformity replicated by nearby Del Rio and its sister city, Acuña. Like Amistad’s natural world, the two communities meld into one.

“There’s no boundary here because things come and go in nature,” says Sarah Howard, an Amistad biologist. “We see the same animals, plants, and birds. And we share the same water on the surface and underground.”

The lake keeps floodwaters and drought in check for the region, gathering the downstream flow of the Rio Grande, the Devils, the Pecos, and the Rio Conchos of Mexico behind Amistad Dam. The dam also generates power, providing over 100 million kilowatt hours of hydroelectricity annually for each country. 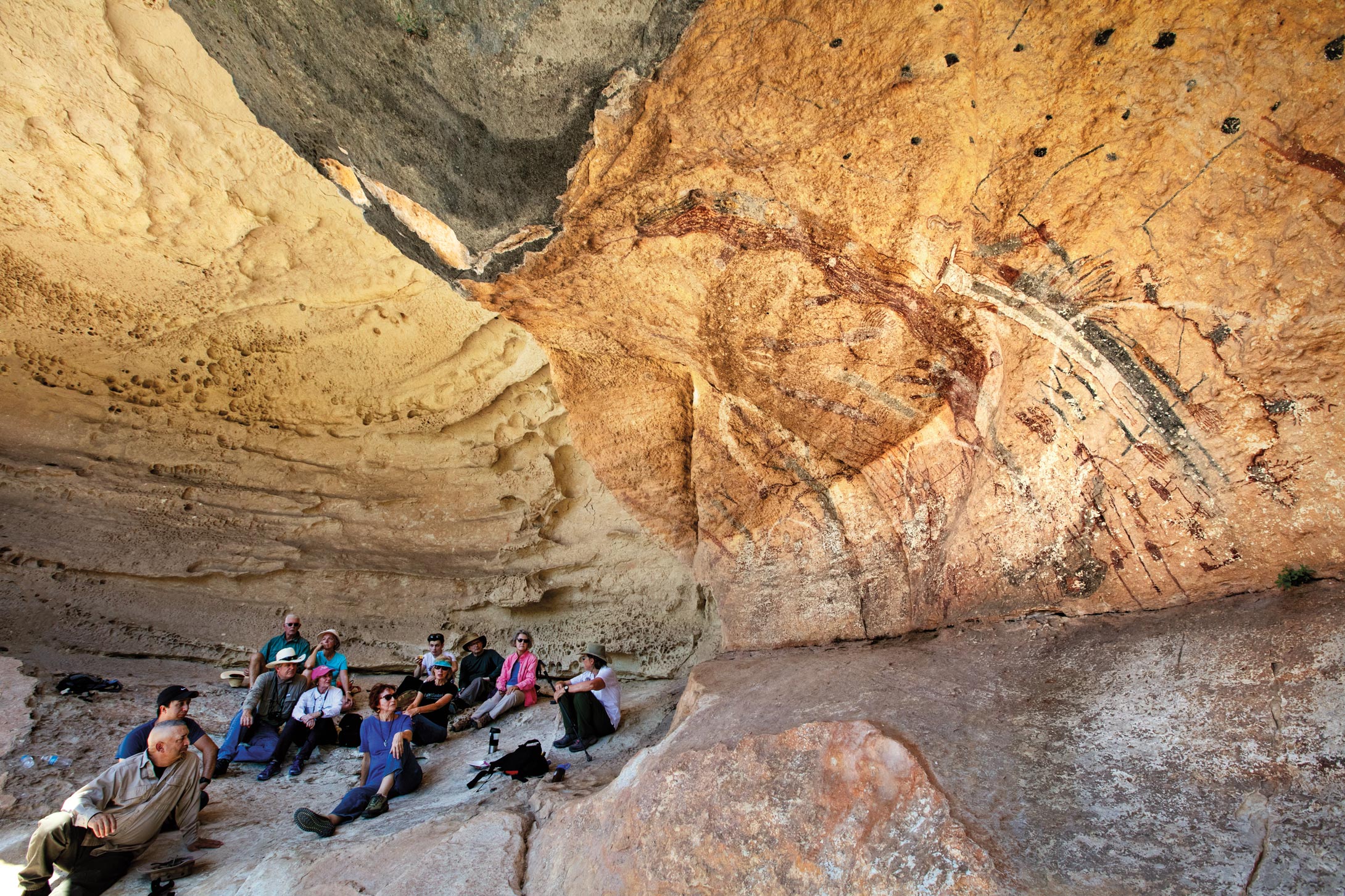 The white shaman rock shelter, one of several well-preserved pictograph sites in the Pecos River region near Amistad Reservoir.

But for most Texans the lake is all about fun. Amistad National Recreation Area, formed in 1969 after construction of the dam along the Rio Grande, encompasses the U.S. portion of the lake and its 547 miles of Texas shoreline, including several thousand acres of adjacent lands. Anglers and boaters make up a majority of the million-plus visitors each year. On most summer afternoons, jet skis and speedboats hashtag the water’s surface while bass boats putter in and out of the coves. The lake’s scalloped shoreline rises and falls with the weather, submerging acres of desert plant life after a monsoon season or revealing bone-white stumps during drought.

Amistad’s vast open water is easier crossed with a motorboat, and sudden weather changes can make navigation difficult even under plenty of horsepower. (Paddlers typically stick to the coves and upper river regions where waters are more negotiable.) Thunderclouds can develop abruptly over the lake or are borne along by swift-moving storm fronts, shattering a placid afternoon with high-voltage strikes and sheets of rainfall. For weather watchers, the view from Amistad’s Diablo East picnic shelters includes a generous expanse of lake, the Union Pacific Railroad bridge along the horizon, and bright limestone cliffs nearby. Once a storm passes and day settles to dusk, tranquility returns as boats come in to dock, their navigation lights mesmerizing like satellites crossing an obsidian sky.

“There’s no boundary here. We share the same water on the surface and underground.”

Swimming also tops recreational activities, especially for locals who drive the gravel Viewpoint Road to reach the Diablo East swimming pier. On warmer weekends, crowds are especially drawn to the camping and picnic areas at the paved Governors Landing, located beneath the Herbert C. Petry Bridge spanning the Devils River arm of the lake along US 90. The highway bridge parallels the handsome Union Pacific Railroad bridge, which carries trains across a quarter-mile of water. Its six metal trusses on concrete piers arc above the reservoir like taut bows that sling curved shadows onto swimmers like Jeremy Vera, a native of Del Rio now living in San Antonio. “I’ve been coming here since I was a kid,” he says. “This is a great place to swim, especially for kids because it’s pretty shallow.” 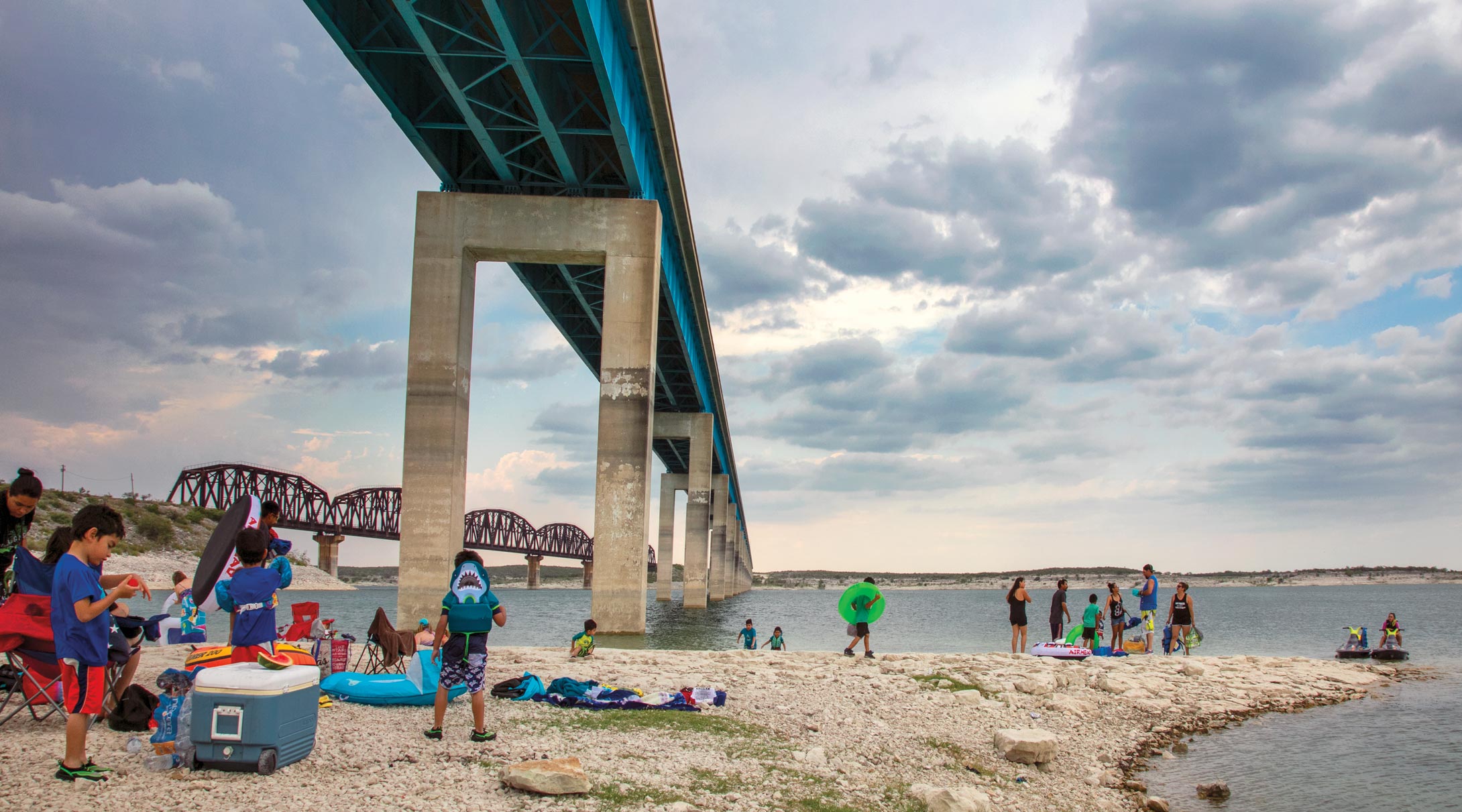 Today’s visitors are just the latest in the region’s 10,000-year history of human migration, which began at the end of the last ice age. Starting about 4,000 years ago, hunter-gatherers left a record of their occupation in the form of pictographs. By creating brushes from plant fibers and hair and pigment from ground minerals, plants, and animal fat, these ancient humans illustrated their earthly lives and spiritual pursuits across the region’s rock surfaces and shelters. Several sites are accessible by boat as well as at nearby Seminole Canyon State Park and the White Shaman Preserve, the state’s premier rock art shelter, where tours are offered by the Witte
Museum Rock Art Foundation.

Although operating costs have increased over time, Amistad’s funding has remained relatively flat, and repairs and concessions contracts for two of the park’s marinas have been on hold since 2014. By contrast, the Southwinds Marina is a bucolic bit of shoreline off Spur 349 managed by nearby Laughlin Air Force Base. The marina amenities are available to members of the military, veterans, and their families, although the boat ramp is open to the public. 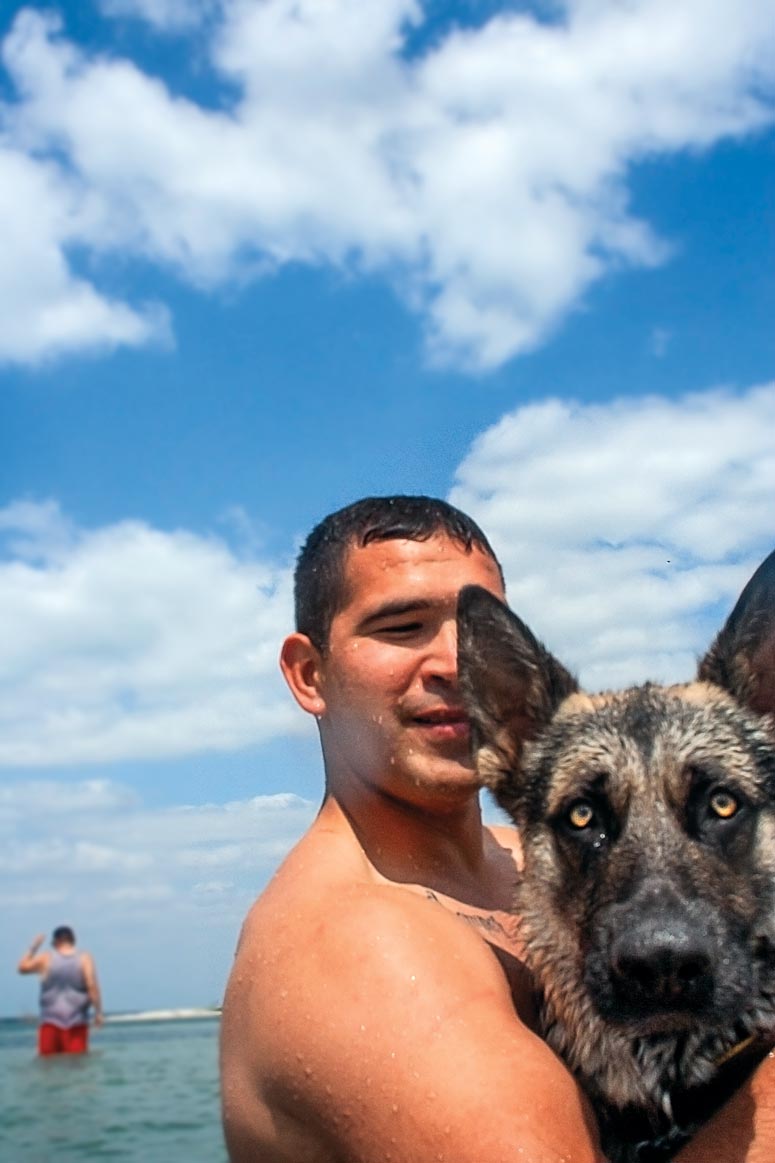 “The military and law enforcement provide a buffer for the recreation area, helping to keep us safe,” says Greg Garetz, Amistad’s Chief of Interpretation and Resource Management. The region is a federally designated high-intensity drug trafficking area, although no Amistad visitor has yet been a victim of border-related crimes. “If a visitor sees something unusual, they should leave the area and then call the sheriff’s department,” Garetz says. “But between our own rangers, Border Patrol agents, Texas Parks and Wildlife game wardens, and local officers, we’ve pretty much got a law-enforcement presence around all the time.”

Amistad’s biologists are more focused on preventing the spread of invasive species while protecting and conserving natives like monarch butterflies and an endangered bird, the interior least tern, an unusual summer resident of Amistad Reservoir. The smallest member of the gull family, the tern is gray and white with a bold black streak across its head; makes squeaky, zipper-like calls; and dives into the water to snatch fish with its sharp, corn-yellow beak.

Presidents Dwight D. Eisenhower and Adolfo López Mateos are credited with naming Amistad Reservoir during a 1960 border summit, which is commemorated every October with a Fiesta de Amistad parade and Abrazo (Embrace) ceremony where Texas and Mexico meet on the reservoir dam.

To help them keep track of Amistad’s natural world, Howard and her staff rely on other scientists and agencies such as the Texas Speleological Society and the San Antonio Zoo. Howard also stays in touch with her neighbors across the border. “A lot of our concerns are the same,” she says.

Howard often turns to social media to swap information, particularly when monitoring endangered species. “The monarch butterfly migrates between the U.S. and Mexico,” Howard says, “so we use Facebook as a collaborative tool for raising awareness about the migration and to track the butterflies’ progress across the borderlands.” 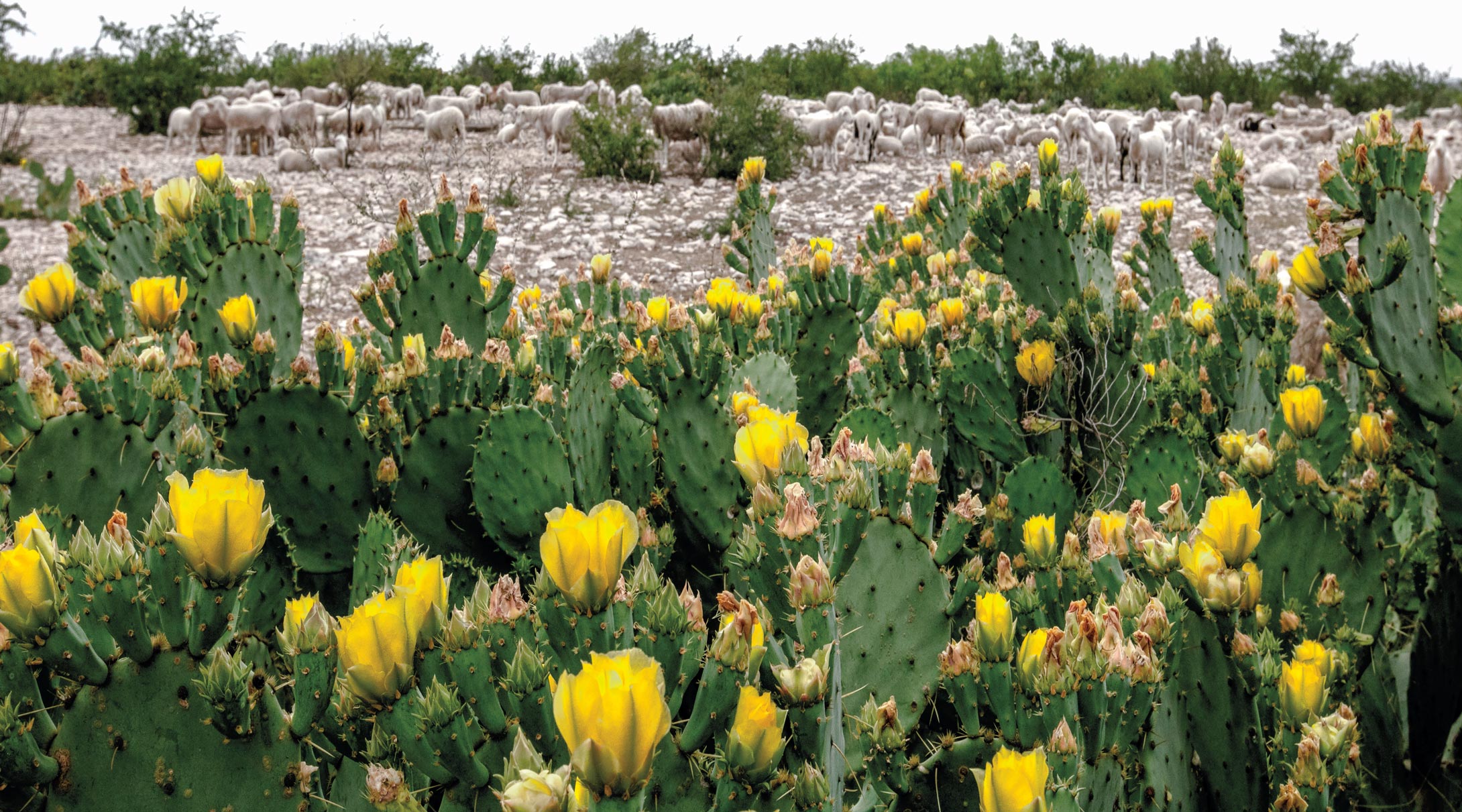 On an unseasonably cold and windy Amistad day this past spring, chilly temperatures kept picnic areas unoccupied while whitecaps emptied the lake of boats. The Diablo East swim dock, poking into its sheltered cove, drew only two anglers, friends stationed at opposite ends of the T-shaped pier. Back to back, the anglers cast to opposing shorelines—one to the north while the other released south. Yet their movements synchronized, slicing through the blustery fray in pursuit of the same thing.