A Brief History of Innovations at Texas Stadiums, From AstroTurf to Robot Servers

With the opening of Q2 Stadium in Austin, we look back at how sports arenas have evolved in the Lone Star State 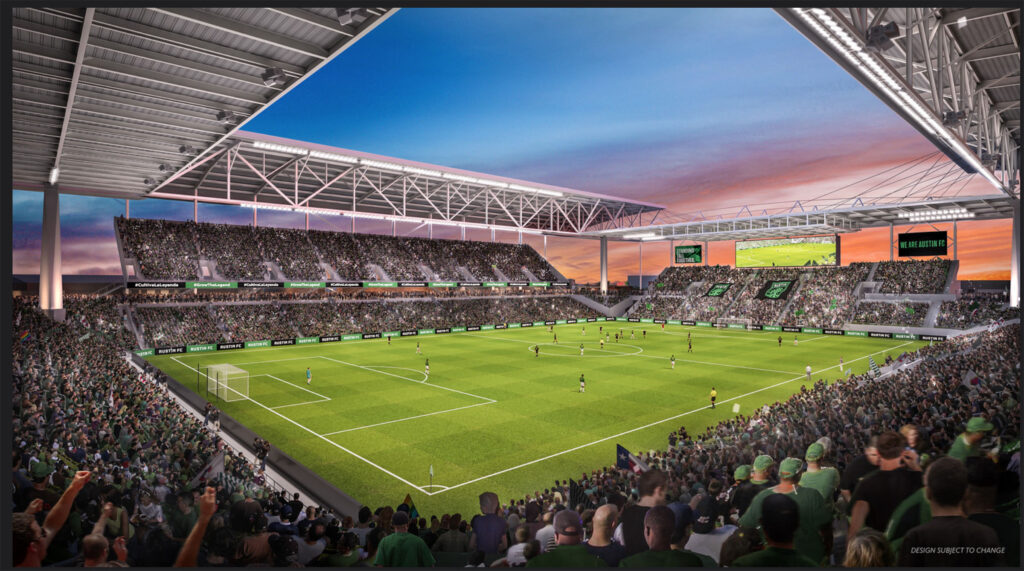 A rendering of Q2 stadium in Austin. Courtesy Austin FC.

With its distinctive metal roof resembling an airplane wing, Austin’s Q2 Stadium is the latest entry into Texas’ extensive history of sports stadiums. Opening in June, the new $260 million soccer-specific venue boasts cutting-edge design and amenities, including seats that stay cooler in the state’s unforgiving summers. It’s one of the many innovations—from a space-age substitute for grass to the introduction of nachos and robots—Texas sporting venues have pioneered throughout the years.

In 1916, El Paso built one of the first major concrete stadiums in the country. Costing $500,000, R.R. Jones Stadium was built for El Paso High School and had a capacity of 12,000. Twelve years later, permanent outdoor lighting was added, and on Sept. 29, 1928, the stadium became the first in the Southwest to host a football game under lights.

The Birth of AstroTurf

Once dubbed “the Eighth Wonder of the World,” Houston’s Astrodome opened in 1965 with the intent of growing grass inside a domed stadium. But according to the history page on AstroTurf’s website, the clear Lucite dome windows covering the stadium created glares that interfered with play in the baseball games. “Astros outfielders and their opponents were blinded as they attempted—and failed—to catch pop-ups,” the website says. When the panels were painted over, the glare problem was solved, but it kept light out and prevented the grass from growing, which created a whole new problem.

Enter AstroTurf, a synthetic grass originally called “ChemGrass” and created by Monsanto for the U.S. Army. It was renamed for the baseball team that first used it in games in 1966. It’s definitely evolved since then, with the incorporation of new materials to give it an even more realistic grass feel; but even at its outset, it literally changed the landscape of American sports.

Nachos—created in 1943 in Piedras Negras, Mexico, and finding favor in its northern neighbor via an Eagle Pass church cookbook—made their first stadium appearance at Arlington Stadium. That’s where nachos with Ricos cheese sauce, the brainchild of San Antonio native Frank Liberto, debuted in 1976. Famed Monday Night Football commentator Howard Cosell waxed poetic about nachos during a 1978 Cowboys game, as they had migrated to Texas Stadium by then, and their legend grew. 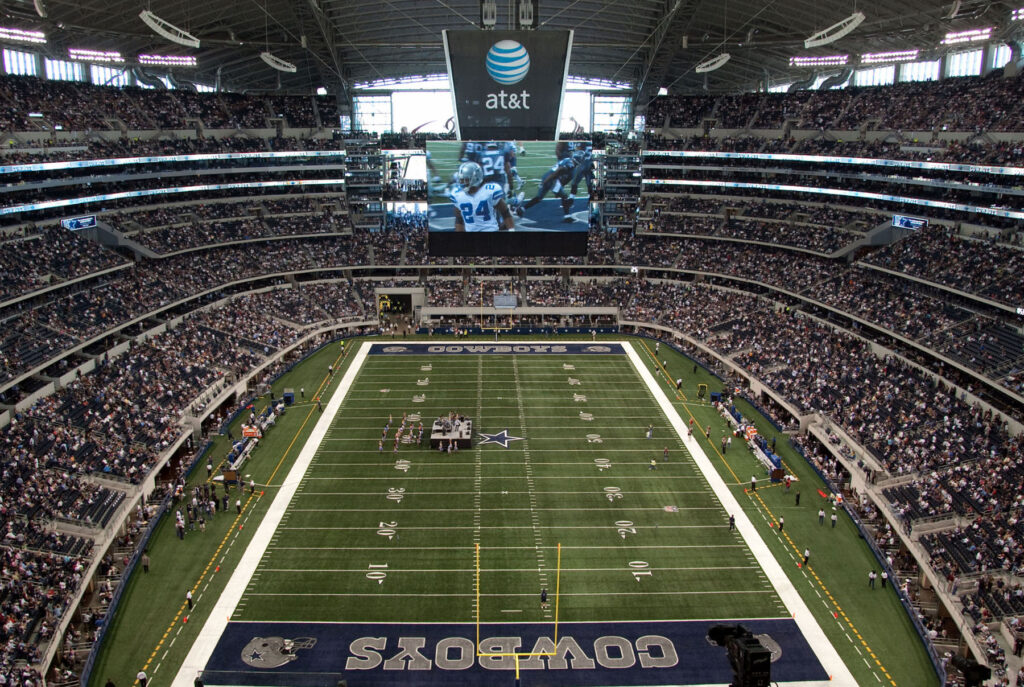 When Cowboy Stadium opened in 2009 in Arlington, its massive video screen suspended above the field was one of its most distinctive “bigger in Texas” features. Measuring 72 feet high by 160 feet wide, the 600-ton behemoth entered the Guinness World Records book as the “World’s Largest High-Definition Video Display.” Though it’s been surpassed by bigger video screens since then, it still remains a testament to Cowboys owner Jerry Jones’ propensity to go large.

When Allen ISD built its Eagle Stadium in 2012, it turned heads around the nation with its 18,000-seating capacity, three-level press deck, and $60 million price tag—not counting the $10 million cost of needed structural repairs just two years later. That created a mega-stadium arms race with rival DFW metroplex suburb McKinney, which spent almost $70 million on its 12,000-seat stadium opened in 2018, and with Prosper, which built a nearly $50 million 12,000-seater that opened in 2019.

Retractable roofs just make sense in Texas. The Houston Texans NRG Stadium debuted the feature among NFL teams. NRG opened in August 2002 for football, and had its literal first rodeo four months later, as it was designed with both bucking broncos and Denver Broncos in mind.

Arlington’s Globe Life Field, which debuted in May 2020 with a high school graduation after the pandemic interrupted baseball season plans, boasts the largest single-panel retractable roof. Dallas-based architecture firm HKS, behind AT&T Stadium and Los Angeles’ $5.5 billion SoFi Stadium, designed the new Texas Rangers’ home with a 240,000-square-foot retractable roof that takes 12 minutes to open or close. It lets in light without the glare that hampered Astrodome players a few generations ago.

Robots At Your Service

Earlier this year, the Houston Rockets, Bear Robotics, and Levy Restaurants teamed up for what’s being touted as the “first-ever robot-assisted food and beverage service at a stadium or arena.” What looks like a rolling cylindrical drink cart with two platforms started helping hospitality team members working the arena’s suites in April, according to an article in The Spoon. As a Levy rep told the food-technology news site, “This pilot program will allow Toyota Center staff to learn more about the robot and how it could be potentially utilized in more areas next season.”

Q2 Stadium, the home of Major League Soccer’s Austin FC, has one of “coolest” features of any stadiums: breathable mesh seats. Six thousand seats have this feature, making up about 30 percent of the stadium seating. Though this technology has been available at sports venues since 2013, this will be the second-largest collection of chairs in one stadium, and by far the largest in a soccer stadium.

“It mitigates the temperature to the tune of anywhere from 35 to 50 degrees surface temperature compared to plastic or vinyl,” says Deron Nardo, president of 4Topps Premium Seating, maker of the seats, which get plenty of airflow around their woven strands of material. While vinyl seats typically can reach a staggering 165 degrees exposed to direct sunlight, the 4Topps stay a relatively cool 116.

Nardo says, of his initial meeting with Austin FC reps, “We were very adamant that they should take all the seats outdoors in the sun and conduct their own test on them, let them sit out for a couple of hours. We knew that was going to be a strong selling point for us.”

Clearly, the seats passed the test, and they’ll be put to use when the U.S. women’s national team christens the stadium June 16 with an international friendly match against Nigeria, followed by Austin FC’s first home game on June 19 against the San Jose Earthquakes.