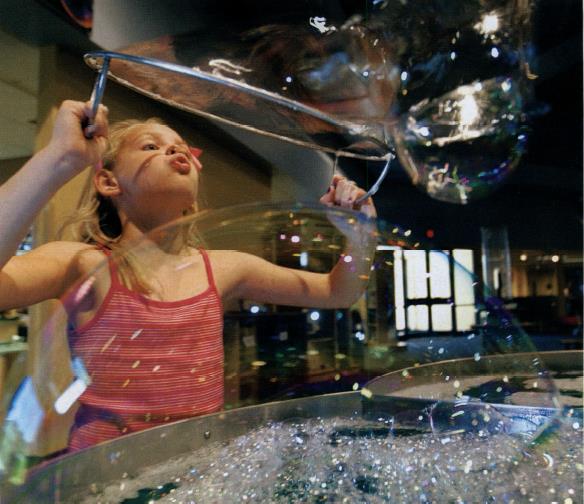 Bubbles are an integral part of the center’s Bounce exhibit. Ansley Mccubbin gets interactive.

Two revelations strike me as I wander through the expansive, remodeled Don Harrington Discovery Center complex: You’re never too old to get a kick out of bubbles, and you’ll be surprised at how much science you’ve forgotten that you once learned.

Watching preschoolers chase big, buoyant bubbles spouting from a machine in Bounce, a permanent exhibit about everything spherical, brings a smile I can’t shake. I refrain from running around trying to catch and pop the shiny, floating balls. Instead, I’m content to watch them drift dreamily through the air, then disappear in a shimmery poof.

I proceed onward to discover much more throughout the rest of this informative attraction, and I hardly recognize it as the place I last visited nearly 25 years ago. Begun more than three decades ago and named for the late Don Harrington, a successful oilman and generous Panhandle benefactor, the center recently underwent a massive, 25,000-square-foot renovation and expansion.

Lifelong recollections get a jolt in Memory, a traveling exhibit well-suited to adults (it has since been replaced with three new exhibits: Einstein, Playing
with Time, and Team Up: Explore Science & Sports). At Memory, I find myself in front of a TV screen flashing images from nearly 500 films—Casablanca,
King Kong, Ghostbusters, Citizen Kane, Bonnie & Clyde, Psycho, Sabrina, Arthur, Animal House, Breakfast at Tiffany’s, Annie Hall, Easy Rider, and The Wizard of Oz, among many, many others. The exhibit’s Sense of Smell section evokes the mind’s memories with whiffs of scents that include baby  powder, Coppertone suntan lotion, Play-Doh, crayons, and Vicks VapoRub. On the exhibit’s jukebox, more memories spill forth when I hear Yakety Yak, Beat It, and Macarena.

Kim May, the museum’s director of business development, says mine is a typical adult reaction at Discovery Center.

”Adults think they’re just coming to chaperone, then you see the ‘ah-hah!’ moment happen,” May says. “That makes our job here fun.”

Teachers with high school gifted-and-talented programs have devised a scavenger hunt wherein students have to find facts within the museum, a clever strategy that appeals to teens’ competitive spirit.

May says the guests most surprised by how much they like the Discovery Center tend to be middle-schoolers.

“They’re so used to external stimulation from computer games, and then they come in and find themselves really taken with an exhibit,” she adds. “We can see them stop and look and set aside their preconceived notions about what’s cool.’

One of the areas that gets attention is Amazing Bodies!, with a “farting chair,” something any 13-year-old boy will adore. Within this installation, which uses kids, cows, and dogs as content touchstones, you learn how life science connects almost all living creatures. Nearby, the Hunters of the Sky exhibit examines birds of prey. It’s clear that kids enjoy this overview of eagles, owls, and vultures. My favorite display here dealt with what these winged wonders eat-a diverse menu of squirrels, beetles, small birds, minnows, snakes, frogs, and even crawfish.

Hungry myself, I step over to the Space Theater’s entrance, buy a box of popcorn, and find a seat within the new, multimedia auditorium. Another addition in 2008, the digital planetarium takes spectators to Mars, a black hole, and beyond, as well as to remote areas of Earth and the galaxy to see what  scientists have already discovered and hope to find in the future.

Among the theater’s five or more films and planetary programs shown daily, I watch a movie called New Horizons, a majestic journey through our solar
system featuring 360° photorealistic, 3-D animation. I relearn about the heavenly phenomenon, CometHaleBopp, its 10-million-mile-long vapor tail, and iceberg core. My impression: Wow! How could I forget something so astronomically astounding?

The theater’s seats may be comfy, but I need to keep moving to see the rest of Discovery Center. I want to be sure to stop in the museum shop, too,
to buy the best-selling mood ring—a ’70s item that changes color according to temperature. I won’t wait as long to return, as big plans continue to percolate here. Next? Perhaps an early childhood zone. An outdoor science park also figures among planning discussions. That should bring out even more of the kid in everyone.