For some, taking a deep breath isn’t easy. West Texas may be the solution. 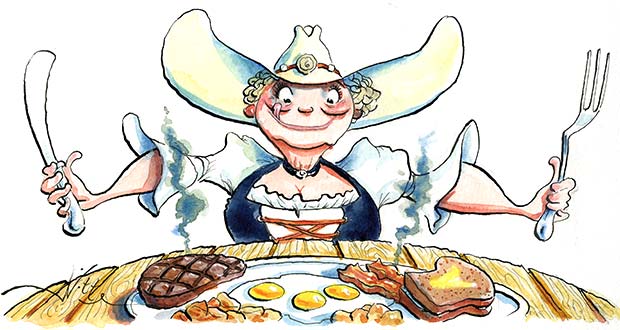 Civilization streams across the Trans-Pecos in the thinnest of ribbons, but holed up in the Davis Mountains it’s difficult to miss crowds, shopping strips, pavement. It’s that sense of splendid isolation I wanted to share with my German mother-in-law, 20 years ago when she visited Texas for the first time.

It was a trip that did not begin well. Like many Europeans, Lilo — and for that matter, Jurgen, my husband at the time — did not truly understand the scale of Texas. When we elected to drive to Fort Davis from Fort Worth, I prepared for the trip as one would for an endurance race, knowing full well that neither of my Teutonic relations truly understood what miles and miles of Texas meant.

I don’t think they believed me when I said we would be driving all day — and then some. Somewhere west of Abilene I finally got them both to accept that Texas is roughly twice the size of their home country. Soon after that small victory, we made our first coffee stop.

Lilo does not like to drink coffee out. That’s because in Germany you pay a substantial number of Euros for coffee and you pay by the cup. Lilo drinks a lot of coffee in her home where the coffee maker is constantly spitting steam. When I first married her son and moved to Berlin she warned me that were I to develop a kaffeehaus habit it would break our newlywed budget.

Now, my thermos empty and in need of a break, I pulled into a cafe. Lilo was not happy. And her sour mood was not improved by the quality of the coffee, which had the distinctively oily flavor of West Texas water. When the waiter came around to pour a second cup she balked. When Jurgen and I drank another cup each, a scowling Lilo insisted on picking up the bill. That was when she had her first Lone Star revelation: In Texas cafes, coffee refills are free. Suddenly, West Texas coffee was in favor. In fact, stopping for coffee was now on the schedule as a regular diversion.

We headed out again. Just outside of Midland I offered Lilo her first Tootsie Pop. She loved it. She loved it so much that she bit into it just as we hit the city limits. When a porcelain crown pulled away with the Pop, she howled. Did I mention the trip did not begin well? But in Midland we soon found an emergency dental clinic that fixed her up and had us on our way in about an hour. Score two for Texas. Although she would never accept candy from me again, the kindness of strangers, the affordability of the care and the speed with which a crisis was resolved fueled her second epiphany in a day: Not every crisis is insurmountable.

In Alpine we stopped to eat. In Germany steak dinners are far and few between. The price of beef is equal to a month’s worth of wurst. Cows in Deutschland are mostly of the dairy variety and there is no home on the range — nor any range — for herds of beef cattle. A bonafide medium-rare Texas rib-eye, consumed within sight of the lazy slump of the Chisos Mountains, had Lilo looking at our state in a whole new way.

She began to soften toward what she had formerly considered a barren, relentlessly lonely landscape. Suddenly she began reminiscing about Westerns she had seen in her younger days. When a lone tumbleweed dashed across a road she begged me to pull over and asked her son to wrangle it into the trunk, so that she might take it home. I didn’t see it as actually becoming a carry-on, but wasn’t about to refuse.

The emptiness of the wide-open west is magnified by the gloaming. Bone tired from a long day in the car, everyone grew quiet. Even so, Lilo pressed her nose to the window, struck by the scenes from her Saturday matinees that played out as far as the eye could see: Pronghorn antelope lolling in platinum meadows, rousing themselves at dusk to prance away the chill. Metallic mountains dim to silver-gray as flat bottom clouds scud across the sky. Swells of prairie grass lapping at inky horizons.

At home on this range is the Prude Ranch, six miles northwest of Fort Davis. A family homestead for 116 years (Grandmother Prude came to Fort Davis in a covered wagon), the cattle ranch opened its gates to guests in l921. Since then, five generations of Prudes have welcomed the city slickers who arrive anxious to pull on boots and stomp off city cares. Entire families — many making annual pilgrimages — soon find themselves seduced by fireside sloth, content to belly up to woodburning stoves.

A good night’s sleep is guaranteed in a landscape so timeless and calm. Even Lilo, never a sound sleeper, slept with open mouth abandon. We could hear her snoring through the walls.

Up early the next morning, she woke us to share a glimpse of the parade of piglets snarfling along a fenceline, the round-rumped queue paced by a nipping pony. And then she settled in to watch some more. I don’t think I had ever seen her sit so still, for so long as she did while porch-sitting at the Prude.

The revelations, epiphanies and pure joy came in waves for the next few days: the headscratching awe with which the born skeptic took in the Marfa lights; the new regard given a multi-course Texas ranch breakfast, by a woman whose daily repast has been a single softboiled egg and a slice of cheese for years. And on the way home, an encounter with a roadside barbecue pit fashioned to look like a giant metal cow had Lilo giggling like a little girl. She would have purchased that entire contraption — woodfire still bright — and transported it home if she could have. The big and bright stars at night, the open range, the big-hearted people, Big Bend National Park, incendiary bowls of chili, the local wines — I saw these things transform and soften this woman for whom life has sometimes been very rough indeed. In the long stretch of a winter afternoon, face tilted up to catch a splotch of sun on a splintered porch, I witnessed what appeared to be true contentment.

Why far West Texas has this effect on people I do not know. It just does. As one local good old boy told me: “People come here to die and end up living forever.”

From the February 2014 issue