Of Feathers and Hope 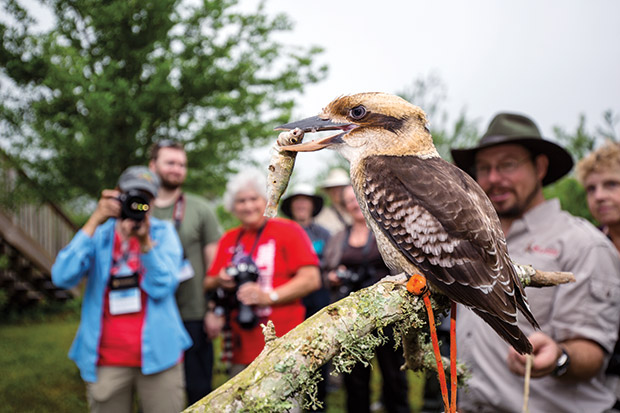 “‘Hope’ is the thing with feathers,” wrote 19th-Century American poet Emily Dickinson in the opening line of her poem of the same name.

This phrase came to mind as I boarded a tour bus before dawn last April during Galveston FeatherFest and Nature PhotoFest.

Galveston FeatherFest and Nature PhotoFest is April 14-17. Online registration is open until April 10, or you
can register during the festival at the Island Community Center, 4700 Broadway. Call 832/459-5533.

With binoculars hanging from our necks and hats on our heads, my fellow birders and I were excited about the potential for great bird viewing, spectacular photo opportunities, and illuminating insights from expert guides. Despite a brisk southeast wind and cloudy skies threatening rain, we were hopeful.

And our hopes were not dashed. Measuring 27 miles long and three miles wide, Galveston Island is a birders’ paradise—especially during FeatherFest, which takes place April 14-17 this year. Billions of birds pass through the Upper Texas Coast in April after an arduous flight across the Gulf of Mexico from staging grounds on Mexico’s Yucatan Peninsula. Untold numbers of those birds make their first landfall in the woodlots, marshes, and freshwater ponds of Galveston Island.

FeatherFest capitalizes on this phenomenon with four days of activities, including dozens of guided bus and boat field trips to various birding sites; photography and birding workshops; themed dinners; a market featuring photography equipment and arts and crafts; a FledglingFest for children; and a raptor show. Put on by the Galveston Island Nature Tourism Council, FeatherFest is headquartered at the Island Community Center on Broadway, the location of most events and the meeting point for most tours.

During my outing to Bolivar Peninsula, we navigated a bewildering diversity of shorebirds feeding in a muddy, marshy pond on the peninsula, which sits between the shores of Galveston Bay and the Gulf of Mexico. Many of these shorebirds had migrated from their Central and South American winter homes on a path of roughly 600 nautical miles across the Gulf of Mexico.

“That’s a least sandpiper, a little mouse-like bird,” added guide Kevin Karlson. “The under wings have a dark trailing edge.”

In the PhotoFest portion of the event, Texas professional photographers, such as Ditto, Scott Buckel, Kathy Adams Clark, Sean Fitzgerald, and Tim Timmis, instruct photographers of all skill levels on the technicalities of shutter speed, aperture, and framing—all with an eye to capturing images of birds and island scenery. For example, Kathy Adams Clark (my wife and my partner in bird guiding adventures) will again this year lead a Saturday morning field trip with Sky King Falconry—a rescue group from the Central Texas town of Paige—to practice taking pictures of raptors in natural settings. Last year, I also accompanied Kathy for the Night and Long Exposure Beach Photography Field Trip. Held at sunset and after dark at the Galveston Pleasure Pier, Kathy teaches participants the art of photographing magical scenes of glitzy lights against a backdrop of coastal evening sky and seascape.

Back at the Island Community Center, I marveled at the enticing bazaar of birding and photography equipment and memorabilia—all manner of binoculars, spotting scopes, cameras, books, and bird-themed artworks. I also made mental note of workshops to attend in coming years, such as Houston naturalists Bob and Maggie Honig’s excursion to identify butterflies and dragonflies at Galveston Island State Park, and Galveston naturalist Don Wilkerson’s kayak trips in the state park.

Dropping in later on some of the classrooms at the center, I was entertained by a Saturday morning children’s program on bird identification led by Stennie Meadours, past president of the Houston Audubon Society.

“Galveston is one of the best places to bird,” Meadours told the youngsters. “The younger you are when you get interested in birds, the longer you have to enjoy them. So, what do you like about birds?”

One little girl raised her hand: “Well, they’re colorful, they’re loud, and they fly,” she said.

The hundreds of birders attending FeatherFest would certainly agree.