At Fossil Rim Wildlife Center near Glen Rose, it's a wild, wild world 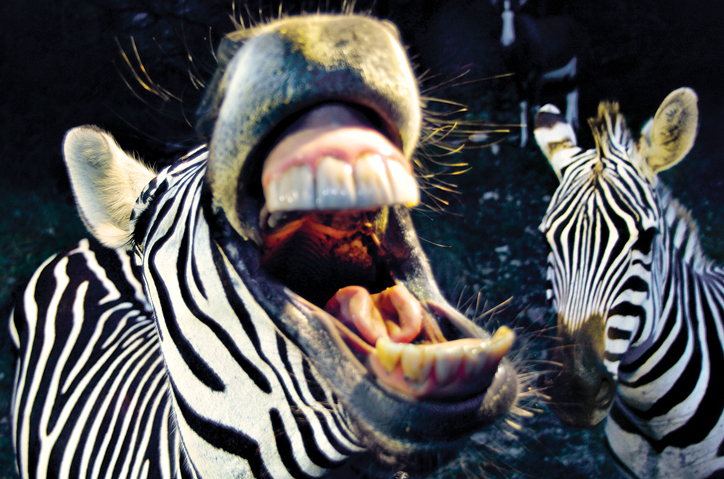 Fossil Rim’s early breedy programs with zebras led to work with cheetahs and other endangered species. (Photo by Kevin Vandivier)

A giraffe lowers its head from the treetops, unfurling an 18-inch purple tongue and delicately plucking a pellet of food from my hand. Another slurps a snack from my husband’s palm, which is extended through the sunroof of our Volkswagen. Soon, we’re surrounded by a bevy of friendly giraffes, all eager to slime us with their wet lips and sticky snouts.

The towering animals, with gently swaying necks and eyelashes so long they look like they’ve been brushed with mascara, have no qualms about bellying up to this bar—or car—for a late-afternoon snack. They’re star attractions here at Fossil Rim Wildlife Center, a drive-through wild-animal park near Glen Rose, some 60 miles southwest of Fort Worth.

“Not only is Fossil Rim an entertainment center, but on the conservation side of things, they’re improving the welfare of animals.”

The park, once operated as a private exotic game ranch, opened to the public 25 years ago. Tourism isn’t the main mission; the primary purpose here is to help species rebound from the brink of extinction. Because of the park’s size—it encompasses about 1,700 acres—it can nurture intact social groups of animals, rather than just individuals. Groups, when reintroduced to their native habitat, have a better chance for survival.

“Because we have lots of space, we can keep animals by the herd, the flock, or the pack,” says Executive Director Patrick Condy. He mentions five species—the addax, an exotic white antelope with ridged, spiraled horns; two types of wolves; the endangered Attwater’s prairie-chicken; and another type of antelope called the scimitar-horned oryx—that have been reintroduced to the wild through breeding programs at Fossil Rim. Some of the park’s addax have been sent to Tunisia to bolster native populations; Mexican gray wolves have been reintroduced in the southwestern United States. The park carefully chooses which animals to work with, focusing on animals that can adapt to the Texas climate.

“If we didn’t have Fossil Rim involved, we wouldn’t have had nearly the success we have today,” says Terry Rossignol, manager of the Attwater Prairie Chicken National Wildlife Refuge near Eagle Lake, which is home to the largest wild Attwater’s population (a mere 50 chickens). Most of them are a result of Fossil Rim’s groundbreaking captive-breeding program. “Not only is Fossil Rim an entertainment center,” says Rossignol, “but on the conservation side of things, they’re improving the welfare of animals.”

Giraffes, too, are losing habitat in the wild. That’s why park officials are so proud of the two gangly, long-necked reticulated giraffes born early this spring. Reticulated giraffes are named for the geometric brown spots on their fur, outlined by a network of white lines. The two female calves, which weighed about 150 pounds and stood six feet tall at birth, are getting used to life in the public eye.

“Because we have lots of space, we can keep animals by the herd, the flock, or the pack.”

“When they were first born, they looked a little like aliens,” says animal-care specialist Cassie Peterson. “Their horns were flattened against their heads, and they had wrinkly, smooshed-up faces. Now they just look like miniature giraffes.”

Giraffes, which are ruminants like cows, chew a cud. That means they’re efficient eaters, chewing and swallowing their food several times before eventually digesting it. (Look closely at a giraffe’s neck, and you can often witness a lunch ofleafy greens make its way back up for another round of chewing.) Their super-long tongues are purple to prevent sunburn, and their height—17 feet or so for bulls-allows them to strip leaves straight off the treetops.

I wave goodbye to my new giraffe friends, and we motor on. We putter past a small herd of zebra, which press in hoping for some pellets from our bucket, cruise through groups of sable and blackbuck antelope, and watch a dainty Thomson’s gazelle (“the fast food of the savannah,” a guide tells us) nibble grass.

Four or five tank-like creatures rumble around the rhino camp. We admire their leathery skin and sturdy legs, then proceed into ostrich territory. We can’t roll up the windows fast enough when we spot the powerful birds marching toward us. After all, ostriches can reach speeds of 40 mph, and their legs are so long and muscular they look as if they could kick over a car! We toss a little food out the window and make haste.

It takes two or three hours to drive the nine-mile paved road that weaves through four separate pastures of the facility. In all, more than 1,000 animals of 50 different species call Fossil Rim home. Among them are cheetahs, wildebeest, bison, and axis deer. The park recently added four Przewalski’s horses, a rare breed of Mongolian equines, to its roster of animals.

Also new for 2010, Fossil Rim is busy expanding its Children’s Animal Center, an educational facility where you can pet a goat and meet an emu. The larger center will accommodate new species, including parrots and a pair or two of the endangered Attwater’s prairie-chickens that are raised in a separate facility at the park.

Our self-guided tour complete, we head to our accommodations at Fossil Rim’s Foothills Safari Camp, a collection of seven tent cabins situated on a slope above a secluded watering hole. Each is set along a gravel path in a grove of oak trees.

The sun is sinking as we settle into chairs on the back porch of the camp’s glassed-in dining room, sipping glasses of wine. Right on cue, the nightly performance begins at the pond on the other side of the fence, just down the hill.

The spindly-looking sandhill cranes, intent on warning noisy intruders away from their nests, flap and squawk from a cluster of trees 100 yards away from us. A trio of sable antelope move in next, cautiously sipping water from the pond. Then come the addax, who bellow out a low-pitched, snorting symphony. Two of them clash horns in an impressive encore in the grassy, cactus-studded field next to the pond.

I’m thankful for the fence that separates us from the wildlife.

When it finally gets too dark to see anymore, we retreat to our cabin. Quarters are cozy—just enough room for two twin beds—but it’s not exactly roughing it. Each canvas-covered cabin is heated and air conditioned, and has its own sink, shower, and toilet. I happily unroll the canvas flaps and let the breeze blow through.

It’s midweek, and we’re the only guests here. Other than the animals, that is.

My husband and I look at each other and grin, soaking up the magical, star-lit ambiance of the place before crawling under the covers. We’ve always dreamed of watching wildlife while on a safari someplace exotic. Until now, we didn’t realize that place was so close to home.