Written by Art Williams, Photographs by Kevin Stillman | From the January 2017 issue | Updated: December 16, 2016 | Filed Under: made in texasTRAVEL 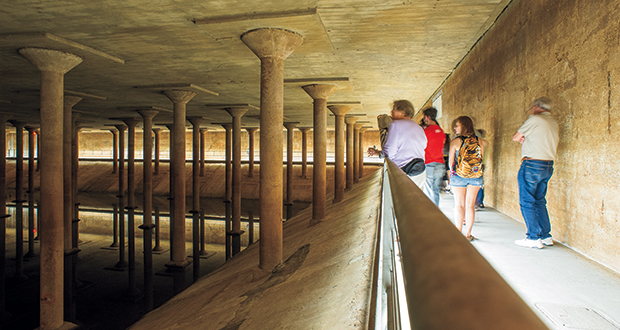 I’m huddled with a half-dozen strangers in Houston, shouting into the darkness. The echo, which turns our calls into an eerie, multi-tonal melody of high-pitched peaks and low moans, stretches for 17 seconds.

Though disconcerting, the scene is more magnificent than scary. Underneath a bustling section of Texas’ largest city, we’re touring the Buffalo Bayou Park Cistern—an 87,500-square-foot architectural relic that served as a City of Houston underground drinking water reservoir for 80 years.

Now decommissioned and opened to the public for guided tours, the Cistern allows visitors to walk into these hidden depths, surrounded by concrete walls, dim strings of LED lights, and strategically placed emergency exits. But the stars of the show are the hundreds of 25-foot support columns. To landscape architect Kevin Shanley of the firm SWA, who was the lead designer of Buffalo Bayou Park, the columns invited a comparison to Istanbul’s Basilica Cistern; hence the new name.

Built in 1926, the reservoir was constructed in response to an 1878 fire that dealt a major blow to the Houston economy. In its aftermath, city leaders realized that they needed a more reliable source of water, both for firefighting and drinking. A series of missteps in water procurement led to critters in pipes, a sinking city from overuse of groundwater, and ultimately a 1904 Supreme Court ruling prohibiting the use of bayou water for the city water supply. After 50 years of folly, the reservoir opened and remained in use until 2004, when it sprung an irreparable leak. The reservoir was decommissioned in 2007.

The key to the Cistern’s rebirth as a tourist attraction lies around us. Here, you’ll now find 160-acre Buffalo Bayou Park, which was completed in 2015 and now buzzes with food trucks, a concert lawn, a nature playground, and bicycle and paddlecraft rentals. Located between Memorial Drive and Allen Parkway near downtown Houston, the urban setting originally lacked sufficient parking spaces, and developers with the Buffalo Bayou Partnership considered the abandoned water reservoir as a site for a parking garage.

However, once designers glimpsed those stunning rows of columns inside the abandoned reservoir, they realized that the site’s historical and architectural importance outshone its potential for parking spaces, and they quickly halted its demolition.

“We discovered this incredible, magical site and decided we should treat it as an architectural relic,” says Anne Olson, president of Buffalo Bayou Partnership. But first, Olson consulted with architecture and engineering firm Page to determine the feasibility of transforming the relic into a park attraction with public access.

Page Senior Principal Larry Speck likened his initial descent into the cistern to discovering an ancient ruin. “Once we saw the space, we were hooked, and we knew we had to figure out a way to incorporate it into the park, and in a way that would keep it as intact as possible,” he says.

To bring the space up to code and allow public access, Speck and his team approached the project conservatively, preserving the industrial beauty and haunting sparseness of the space. They added a ground-level entranceway, dim interior lights, and a six-foot-wide walkway with LED-illuminated guardrails around the perimeter of the space.

Visitors enter through that winding ground-level entranceway. The catwalk is the only part of the space accessible to visitors. Narrow stairs descend to the bottom of the Cistern, but those are only used by engineers and main-tenance personnel.

Walking along the perimeter of the Cistern, I feel a drop of water on my head. Looking to the bottom of the Cistern, I wonder if I’m imagining things. It certainly looks like a shimmer of water reflecting from the base of the room, and our tour guide affirms my observation.

Our guide says that engineers left six inches of water at the bottom of the space, reckoning it best for the space’s structural integrity, as it had held water for eight decades. The sheen of water also contributes to the overall atmosphere, creating brilliant reflections that visually lengthen the columns.

“My favorite thing about the Cistern is that thin layer of water at the bottom; it’s perfectly still and reflects the whole room completely,” Speck says. “It doubles the scale of the space, and at the same time, makes you feel like you are in an M. C. Escher drawing, where it isn’t clear what is up and what is down. It adds tremendous mystery and intrigue.”

Since the Cistern opened to the public in May 2016, thousands of visitors have observed that mystery and intrigue. And many more will flock to the space in the future with Buffalo Bayou Partnership’s curated program of changing art installations.

The Cistern has quickly claimed status as an international attraction, drawing both visitors and artists from around the globe. And for Texans, the attraction affirms that there’s little need to travel far to witness history’s iconic architectural achievements beneath our feet.