Popular chef started from scratch in his adopted hometown 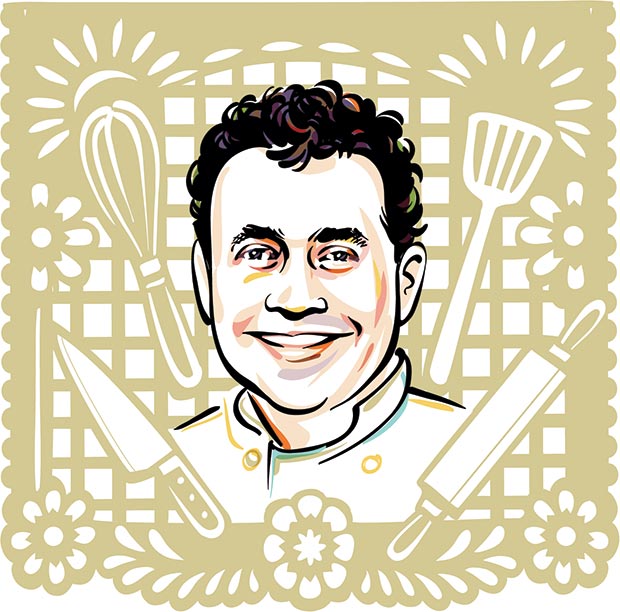 Hugo Ortega’s culinary touch is celebrated in his hometown of Houston and beyond—he’s the creative force behind a string of successful eateries in the city’s prosperous yet competitive restaurant scene.

But it didn’t start out that way. When Ortega first came to Houston from his native Mexico in 1984, he was only 17, didn’t speak English, and had only one contact in a distant cousin. Within two years, however, he had lucked into a position at Backstreet Cafe, a bistro owned by Tracy Vaught in the affluent River Oaks neighborhood. With his natural ambition and talent, Ortega quickly rose through the ranks from dishwasher to busboy to line cook. After graduating from the culinary arts program at Houston Community College in 1992, he soon took over as executive chef. He and Tracy married in 1994, and together they opened his namesake restaurant, Hugo’s, in 2002. His daring menu of interior Mexican cuisine offered a departure from the usual Tex-Mex fare, and Hugo’s soon garnered critical acclaim and legions of fans.

“My grandmother used a metate to grind corn, like in a picture by Diego Rivera.”

In recent years, the couple has launched additional dining es-tablishments. Caracol, which opened in 2013, features Mexican-style seafood dishes in an upscale setting. And Xochi, located downtown in the Marriott Marquis Houston, has been serving up traditional Oaxacan flavors since January 2017. Also this year, Ortega won one of the highest honors for contemporary chefs, the James Beard Foundation’s “Best Chef: Southwest,” upon his sixth nomination for the award.

Not one to rest on his laurels, Ortega has already embarked on a new enterprise, a pop-up concept in San Francisco. Though he has expanded his reach to the West Coast, Ortega says has no intention of leaving Houston, his chosen home. Spared the worst of Hurricane Harvey, Ortega and his restaurants joined the city’s recovery effort by cooking for shelters and first responders and raising funds through special events and cocktail sales.

Q: How did you learn to cook?

A: I was born in Mexico City, but from age 7 to 14 I lived with my grandmother in a small mountain village in Oaxaca. We cooked with fire, and there was no electricity. My day started by getting up at 5 in the morning to make the most of the daylight. I rode my donkey with cántaros, jars made of clay, to get water from the well for cooking. My grandmother used a metate to grind corn, like in a picture by Diego Rivera. She made masa for tortillas, quesadillas, huaraches, sopes. I remember her toasting cocoa beans on the clay comal. When she’d do that, I knew two things would happen: one, we’d have chocolate with water, like the Aztecs; two, she would make mole.

Q: What were your first impressions of Houston?

A: The city back then was not as pretty as it is today. The economy was bad, but Houstonians are relentless when it comes to overcoming adversity. Today, the economy is diverse—it’s the most diverse city in the country. In Mexico we have a saying: “It was meant to be.” I was meant to be a Houstonian and a Texan, and I embrace that. I embrace the ups and downs. That’s what life is all about.

Q: What led you to open Hugo’s and your subsequent restaurants?

A: My wife, Tracy, and I were wondering if we should open another Backstreet Cafe, or a bistro. She said, “Why don’t you cook recipes from your home country?” At the time, I was scared because it’s labor-intensive cooking. For many recipes, like mole, you start today and you end by the third day. But I put my heart and soul into it. To open a new restaurant is to give employment to others. It creates opportunity for those who need it more than I do. At the same time, it’s good for the soul. Xochi was a tribute to my grandmother and to the great people of Oaxaca. I also have a restaurant in Oaxaca called Origen. It’s my continuing education, going back there.

Q: What is your signature dish?

A: It has to be mole poblano. With 21 ingredients, it’s the king of recipes. They say that mole was created a few hundred years ago by nuns in Puebla. They blended together different ingredients—sesame seeds, ancho peppers, mulato peppers, cinnamon, allspice, clove, garlic, onions, thyme, bread… And then people added chocolate to make it not so spicy.

Q: Where do you enjoy traveling in Texas?

A: I love to go to Galveston and try the seafood. I have a friend with a fishing boat in Freeport, where I get to see in person the beautiful huachinango, red snapper. In spring, I love to see the bluebonnets. I used to go to the Fredericksburg area to get peaches—the peaches there are incredible. And I love West Texas. Recently, I cooked at the Gage Hotel in Marathon. I used beets from the hotel’s garden. They also grow tomatoes and a lot of mint. It was my first time out there. It looks like a different country, like you are on the moon.

A: In Houston, I have been eating Tex-Mex at La Mexicana for 20 years. And I’ve been going to Goode Company Seafood for 25 years. I like their mesquite-grilled catfish with salsa verde and the empanadas with roasted pepper and shrimp. In Round Top, Royers Round Top Cafe has a fantastic chef. Of course, we go to Austin and visit Clark’s Oyster Bar. In San Antonio, I love Cured by Steve McHugh at the Pearl Brewery. And there’s Mixtli by Diego Galicia and Rico Torres. They serve modern Mexican cuisine. It’s avant-garde.

Q: How do you feel about winning the James Beard Award?

A: I dedicate that award to the great city of Houston. This wonderful city has been so supportive of me, and it has so much to offer.