A Stitch in Time

New Sail for Elissa Symbolizes the Rebirth of Galveston 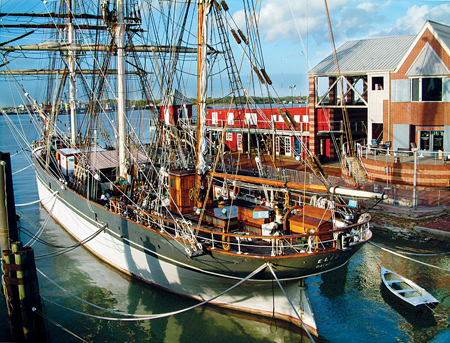 Against the backdrop of the ghastly destruction that Hurricane Ike dealt to Galveston Island in September 2008, a single lost sail—even on an historic ship—seems like modest punishment. In fact, such a shred of not-so-bad news paints a silver lining on the cloud of the overall grim storm situation. In this case, the subsequent repair project for Galveston’s 1877-vintage sailing ship Elissa grew into a hopeful sign: a symbolic rebirth.

Certainly the members of the Galveston Historical Foundation, the organization that owns and cares for Elissa, held their collective breath after the storm as they waited to determine how seriously the wind and water had attacked Elissa. Dwayne Jones, executive director of the GHF, explains, “After the storm, it was several days before we could get in and assess the damage. Basically, the special hurricane moorings held as they should and Elissa did what she was supposed to do, which is rise and fall with the water level. She survived the storm relatively unscathed.”

But even a single sail can be a major undertaking. A nationally recognized sailmaker, Jim Brink, who sewed the original suit of sails for the Elissa more than 20 years ago (and consulted on all three films in the Pirates of the Caribbean series), was called in to work on the replacement sail. Brink pieced the fabric together on the floor of the ballroom in another GHF property, Ashton Villa. Once assembled in the correct shape, the sail was moved over to the Seaport Museum where the seams were sewn on a machine in the auditorium.

But such expertise as Brink’s isn’t without strings attached. Funds had to be raised. To address the challenge, Jones explains, “All the volunteers, people who train to sail the Elissa—and there are several  hundred of those—actually raised the money to pay for the sail themselves.”

Longtime Elissa volunteer John Moran of Houston explains, “Repairing the sail damage cost about $6,000, and volunteers raised more than $5,000 of that with a gumbo dinner benefit.” He adds, “Elissa fared much better than anyplace else on the island during the storm. She broke some stern lines, and flying debris damaged the rigging.”

The sail restoration project took on a symbolic importance to the rejuvenation of the island. Jones says, “I told them every day, ‘The Elissa is a symbol of survival; she’s a symbol of rebirth.’”

And, with the survival and rebirth of Galveston in mind, the Elissa should be a part of any weekend visit to Galveston. You won’t be able to live like Jim Brink, who bunked aboard the ship in the first mate’s cabin during his sail-making sojourn, but the Hotel Galvez is back in fine form, along with the other hotels on the famed Seawall (the San Luis, just down Seawall Boulevard from the Galvez, served as headquarters for emergency crews and media during the storm).

For lodging close to the cruise terminal, try The Harbor House at Pier 21, a comfortable version of a rejuvenated waterfront warehouse, with nautical-themed rooms. The Harbor House is also just a stone’s throw from the Ocean Star Offshore Drilling Rig and Museum, now open to illustrate life on board
an offshore oil rig.

Galveston’s resort and spa options are back in operation as well: The new spa at the Galvez is scheduled to reopen over Memorial Day weekend, so plan to add the lavender hydrotherapy session to make a massage (or other treatment) even more relaxing.

Downtown, in The Strand Historic District, the Tremont House plans to reopen June 1. The historic commercial buildings in The Strand are still recovering
from the days when the storm pushed nine feet of water into the area, inundating the district.

A number of Galveston Historic Foundation properties are open for tours again. As Dwayne Jones explains, “We have shifted our priorities somewhat after the storm. At the Seaport Museum, we lost some of the exhibits to water, so we now have an opportunity to reprogram the museum to better tell the maritime history of Texas. At the Ashton Villa, we’ve been able to ask ourselves how we can make this a more exciting venue for people who come
to Galveston.

“We’ve had to make some hard choices,” Jones says. “We have to relate the experience of living with the barrier island—the experiences we have to share.”

Pitch in for Galveston
Make community service part of your vacation getaway.

If you’re inclined to act on your social conscience, or if you just want to learn more of the behind-the-scenes in-formation about Galveston’s most historic properties, contact the Galveston Historical Foundation and perform some community service on your visit, whether it’s volunteering at a major event or performing maintenance and repairs at a site. The Tremont House offers a special package for GHF volunteers, and the Galvez does the same.

Elissa volunteer Jim Moran explains, “We always welcome volunteers, both on weekends and during the week. There’s plenty to do, whether it’s on ship maintenance or on the site of the museum itself.”

As with many of the public service projects in Galveston, special skills are not required to volunteer for the Elissa. “The only absolute requirement is enthusiasm,” Moran says, “but you don’t have to stay on the boat too long before you simply fall in love with it.”

And there might be an exciting payoff: Volunteers who work at least 65 hours can become eligible to serve as crew on the Elissa for one of the short sailing trips in the spring.

For volunteering opportunities in Galveston, visit the Galveston Historical Foundation at www.galvestonhistory.org, or Help 4 Galveston at www.help4galveston.org.