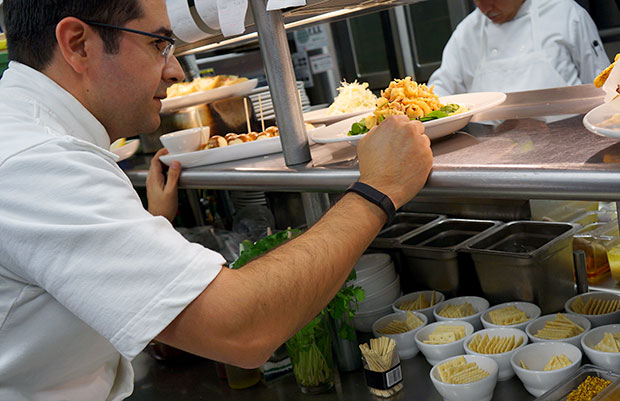 After a couple of terrific meals at Laredo’s El Capataz, Lori Moffatt visits with chef and owner Roberto Gonzalez to learn about his influences, his challenges, why he left a renowned Manhattan restaurant to return to the border, and what he likes to do for fun when he’s not making culinary waves in his hometown city of Laredo.

In July, after a long hiatus since my last visit to Laredo, I made the 3 ½-hour trek from Austin to check out the city’s International Sister Cities Festival, an annual shopping event that highlights the wares of hundreds of craftspeople and culinary artisans from throughout Mexico. While folklórico dancers performed on a stage near the front of the Laredo Energy Arena, I joined the throngs of shoppers investigating tables laden with all manner of products made in Mexico’s 31 states and Federal District, including silver jewelry, hand-painted ceramics, gorgeous Oaxacan textiles, pumpkin-seed candy, honey, and herbal shampoo.

See what the readers are saying.

And on my second night in town, I discovered a restaurant called El Capataz that I’d frequent every week—or more—if I could. In English, capataz means “foreman” or “overseer,” and here, the name is meant to connote that the restaurant is truly breaking new ground. I dined here twice–both times solo, for dinner, perched on a stool at the bar where I could watch the bartenders in action. Both evenings, I ordered fish—the first night, a piece of Texas drum served with a lemony puree of garbanzo beans, green peas, and artichoke hearts ($14); salmon with nopalito salad and chile-citrus vinaigrette ($14) on the second. Both were fantastic with an El Capataz margarita (silver tequila, jalapeño, cucumber, lime, and agave syrup).

The food and beverage service was so well-executed that I wasn’t surprised to learn later that Chef and owner Roberto Gonzalez has both a culinary degree and experience in such highly regarded places as the Four Seasons Resort in Las Colinas and Le Bernardin in New York City. I caught up later with Roberto by telephone to learn about his influences, his challenges, why he left a renowned Manhattan restaurant to return to the border, and what he likes to do for fun when he’s not making culinary waves in his home city of Laredo.

Lori: Can you describe your culinary path? How did you wind up back in Laredo after working in kitchens in New York and Dallas?

Roberto: Well, I’m originally from Laredo, but I left at age 14 to go to military school, then attended the DePaul University in Chicago. When I was in Chicago in the early 1990s. That’s where I met Chef Yoshi Katsumura, the chef and owner of Yoshi’s Café, and he started letting me in his kitchen every now and then. Chef Yoshi eventually recommended that I go to culinary school.

Mentioned in this interview

Lori: And did you?

Roberto: Yes, I got an associate’s degree in Culinary Arts from the New England Culinary Institute, worked at a few restaurants in Vermont while I was there, and did some time at the Four Seasons in Las Colinas between semesters. When I graduated, I went to work in New York, at Le Bernardin–pretty much a French fine-dining seafood restaurant. But in 2000, I decided to move back to Texas.

Lori: Le Bernardin is a pretty big deal—Michelin 3-stars, celebrities in the dining room; why did you leave all that?

Roberto: Well, I missed Texas, and I wanted to be closer to family. And so I decided to change gears. I went into real estate, got married, and my wife and I opened up a boutique department store in an old home here; we did cooking classes and special events. Then in 2011, Karla and I decided to open our own restaurant. It’s risky business, but we built it around things we like.

Lori: That way at least two people are always happy!

Roberto: Yes. We thought a lot about the experiences we like to have, and tried to create that. There was definitely a need for something different in Laredo. It seems like people here always say that we only have tacos, tacos, tacos. We hoped to change that. We wanted to take flavors from Southern Mexico, the Caribbean, Latin America, even Spain, and mix them with a casual bar-food concept—nothing too fancy.

Lori: What do you mean exactly?

Roberto: Okay. Fish and chips is a pretty standard dish. It’s a bar dish, typically served with fries. What we did was find a high-quality fish with a nice texture, and then we came up with a seasoning for the fries—slightly spicy, smoky, and tangy. Then I took the idea of serving fish with a creamy chipotle sauce—popular along the coasts of Mexico—and refined the flavor by making a variation of a remoulade. Simple, good, but a little different.

Lori: I had fish at your restaurant two nights in a row!   The first was a piece of Texas drum with some lemony hummus, and then I had nopalito salmon. Both were terrific.

Roberto: Thanks. The first dish we call Corvina Valenciana. It’s influenced by Spain a little bit. Basically I wanted to do a garbanzo-bean puree with fresh lemon, and then I added fresh green peas and artichoke hearts, all drizzled with Spanish olive oil, and we used black drum from the Gulf, so it’s kind of local. It’s something healthy with a touch of Spain. Again, nothing too complicated.

Lori: What are some of the challenges of running a Latin American restaurant in Laredo?

Roberto: Down here, there is such a heavy influence of Northern Mexican cuisine. At first, I thought it would be a hard sell to encourage people to try something different, but it’s been more readily accepted because there are usually familiar elements. We have a policy that if you don’t like a dish, tell your server and we’ll take it back and get you a new dish. Don’t feel bad about it. Don’t be afraid to try something unfamiliar. 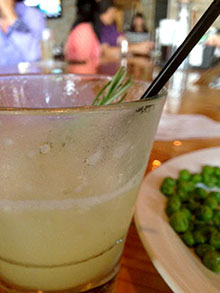 Lori: Your drink menu is inventive, too.

Roberto: We approach our drink menu the same way. Where can we add a touch of something different to make a standard drink interesting and new? For example, our Capataz Margarita is a traditional margarita with jalapeño and cucumber, which add a new dimension. It’s our signature drink.

Lori: I loved it. The heat of the pepper really made the lime pop.

Roberto: We have another drink called El Relax. It has chamomile tea in it. We make an infusion of chamomile and honey, then add tequila. I remember my mom saying that chamomile and honey will make you relax. Of course, the tequila relaxes you, too!

Lori: I know you spend a lot of time at El Capataz, but where do you go when you want to eat out?

Roberto: Karla and I have a two-year-old son, so we don’t go out much right now. But when we do, we like to go to a couple of places for our date night. One is called the Border Foundry; they make great pizzas, crab cakes, and craft cocktails. Then there’s the Tack Room, downtown, attached to the La Posada Hotel. It’s a nice place to have dinner and enjoy a breeze when we get one down here. As a family, Lolita’s Bistro is a must for us at brunch! And we recently started visiting a place called Pat’s Kitchen; it’s a 50s-style diner, and they’ve got good burgers, hot dogs, malts.

Lori: How about vacation spots in Texas?

Roberto: My wife’s family lives in El Paso, so whenever we make the trip, we go through Marathon and Alpine and Marfa, on US 90. It’s one of my favorite drives. We like to stay at the Gage Hotel in Marathon; it’s got a great bar and good food. The drive across Texas on US 90 is one of my favorite drives in the whole state. And of course El Paso has a great dining scene, but that’s a whole new conversation.