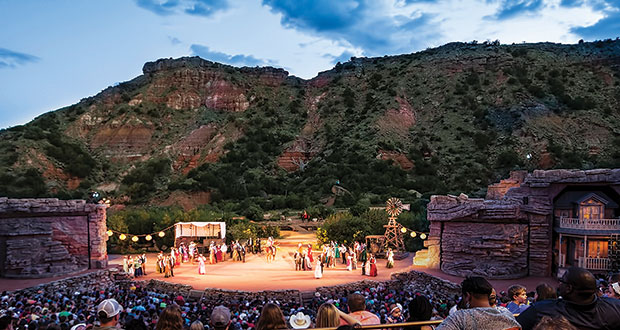 Cutting through the heart of the Panhandle, Palo Duro Canyon State Park—the second-largest canyon in the country, falling behind that grand one in Arizona—holds a rich history in its deep walls. Thousands of generations of people have lived in this spectacular landscape: Geologists have found evidence that humans called the canyon home as far back as 15,000 years ago. In more recent centuries, the Apache, Comanche, and Kiowa tribes all fought many battles over this precious territory, including their last stand against the U.S. military in 1874. When these Native American tribes were pushed out to reservations in Oklahoma, settlers began moving in, including Charles Goodnight—inventor of the chuckwagon—who drove more than a thousand cattle into the canyon in 1876. Every summer for more than five decades, the canyon walls have set the stage for an outdoor musical drama that aims to tell the stories of these Native American struggles and 19th-century pioneers. “TEXAS” returns to the canyon’s Pioneer Amphitheatre for its 53rd season June 2-August 19, with a special holiday show July 3. Over the years, the musical has seen more than 4,000 cast and crewmembers; many in this year’s iteration have been performing the same character for decades. It’s theater for the people—especially the outdoor-loving Texans who otherwise might not feel comfortable going into a traditional theater to see a musical production. But more than anything, it plays out the drama of Texas history in a setting like no other.