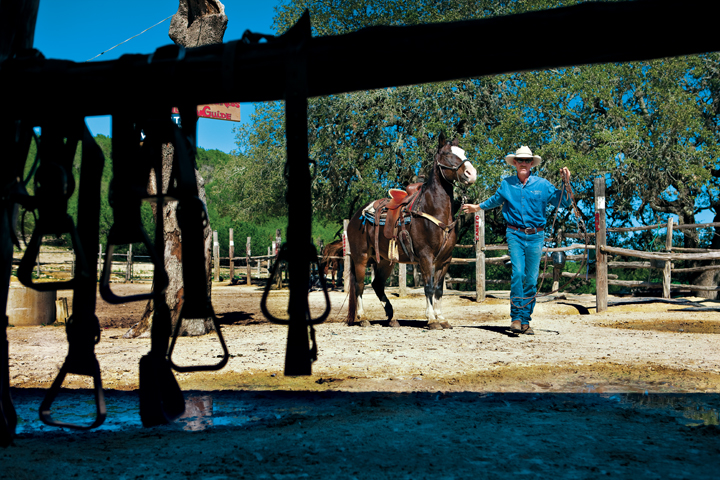 I’m back in the saddle again, riding a sure-footed horse along a rocky path that twists and bucks through cedar-strewn hills south of Bandera. My teenage daughter Erica trails along behind me on a feisty mare while a mustachioed wrangler, clad in dusty leather chaps and a weathered cowboy hat, leads the way. Soon my imagination wanders back 130 years to the grueling Longhorn cattle drives up the Great Western Trail to Dodge City. After more than an hour on horseback, thirst sets in under the blazing sun and my aching legs beg for solid ground. Still, I’m loving every minute of my trail ride at the Silver Spur Guest Ranch.

‘Even though the trails across Texas are not as long and lonesome as they once were, it’s good to know you can take advantage of the opportunity to saddle up and get the feel of life on horseback. And still be close to a hot meal and a cozy bed.’

Most folks vacation at Texas dude and guest ranches like the Silver Spur for idle pleasure, not Lonesome Dove adversity. They come for the food (“three squares a day”—steaks, barbecue, Tex-Mex, and cowboy breakfasts) or fellowship with family and friends, along with rejuvenation of body and soul. Activities abound at guest ranches, but there’s no pressure to participate. Whether you opt to relax on a shady porch, ride horses, hike and swim, or join hayrides and campfire sing-a-longs, stress melts like chocolate on a s’more.

Although Texas may be the birthplace of the American cowboy, dude ranches came of age in the Rocky Mountains in the 1880s, popularized by the Uber-dude Theodore Roosevelt and romanticized by Western artists and writers. Back then, a dude simply meant anyone who came out West and paid for room and board to stay on a ranch. Over time, the word evolved into a pejorative term for a foppish dresser, greenhorn, or tenderfoot. These days, popular culture hijacks “dude” for the inane greeting, “Hey dude.”

Dude ranching reached its early heyday in the Roaring Twenties. Texas’ first dude ranches, such as the Prude (still operating as a guest ranch in the Davis Mountains of West Texas), the Gallagher west of San Antonio (now a venue for corporate retreats and private parties), and the Buck near Bandera, opened to vacationers during that decade. One of the Buck Ranch’s neighbors observed wryly, ”You can run more dudes to the acre in these hills than you can cattle.”

Bandera styles itself as the dude-ranching center of Texas, and it still holds the reins on the state’s “horsepitality” industry. A dozen or so dude and guest ranches as well as more sophisticated equestrian centers lie within 15 minutes of the self-proclaimed “Cowboy Capital of the World.”

Many more guest ranches operate around the state. A cadre of small-scale ranches near the Metroplex caters to clients booking corporate events, reunions, and weddings. Others, like the 30,000-acre Cibolo Creek Ranch south of Marfa and the Wildcatter Ranch near Graham, northwest of Fort Worth, pamper guests with luxury lodging, gourmet cuisine, and spa amenities.

A few other spreads, such as the Lazy F Guest Ranch, an hour east of San Antonio in South Texas, and the Bar H Dude Ranch in the Panhandle, remain closer to the cowboy way, providing true-grit, butt-in-saddle trail-riding experiences that transform city slickers like me into Gus McRae wannabes.

Here are four of my favorite guest ranches in Texas. I return to them time and again because the stars seem brighter, the nights quieter, and the days longer when I roll through their gates. Put me on a tall horse, and the world looks bigger and wilder. Happy trails indeed!

I love the Mayan (locally pronounced MAY-ann) because it embraces the essence of dude ranching: treating guests like family and serving up zany activities all day and into the evening.

Owned and operated by the Hicks family since 1951, the Mayan Ranch nestles in a picturesque valley amid cedar-clad hills six blocks from downtown Bandera. The cypress-lined Medina River, where guests can swim, tube, and fish, draws a lazy horseshoe loop around the 348-acre spread, crisscrossed by riding trails. White-tailed deer and showy peacocks wander among the rustic cabins, originally built on this site in the 1930s for a Girl Scouts camp. Now, a swimming pool, party pavilion, basketball and tennis courts, corrals, Western village (Hicksville), and a welcoming lodge with dining hall round out the amenities.

The Mayan caters to families, reunions, corporate retreats, and the occasional movie star or political celebrity. “Everybody here is just as important to me as anyone else,” says Judy Hicks, who established the ranch with her husband, Don. “If you’re a Mayan guest, you’re my celebrity,” she adds.

And the food? It’s basic, plentiful, and based on the down-home recipes Judy Hicks has compiled over a half-century of feeding guests and hungry cowboys, as well as the couple’s 12 kids.

Silver Spur Guest Ranch
“Where Memories Are Made”

If you like to ride, gallop over to the Silver Spur, a family-friendly guest ranch nine miles south of Bandera and next door to the sprawling Hill Country State Natural Area, a popular equestrian destination. Riding options abound. Enjoy two one-hour rides a day on the 300-acre ranch’s seriously hilly trails, or arrange for longer, more challenging rides through the 5,300-acre natural area, which offers more than 40 miles of multi-use trails.

Garry Walsmith and his wife, Kay, bought and renovated the Silver Spur (originally established in 1980) in 2003 and reopened it on Valentine’s Day 2004. They diligently maintain a hardworking herd of horses and interesting trails on which to ride them.

Not into riding? Then come and kick back in the rambling, three-story lodge, swim in the Junior Olympic pool, hike the trails, birdwatch, collect fossils, and “cowboy up.” The Silver Spur can set you up with campfire sing-alongs, cowboy breakfasts, trick-ropers, Western storytellers, line-dancing lessons, and hay-wagon rides to the natural area next door. Walsmith often leads the hayrides, feeding his beloved Longhorns along the way and telling tales of the Texas frontier.

“One of the nice things about the ranch,” says Silver Spur wrangler David Mangold, “is that you can park your car and not have to start it again until it’s time to go home.”

YO Ranch, near Kerrville
“Live the Legend”

Sprawling across 35,000 acres west of Kerrville, the legendary YO Ranch defies easy description. Is it a working Longhorn cattle ranch? An exotic wild-life preserve? A trophy hunter’s paradise? An adventure and cowboy camp for kids? A guest ranch with trail riding and gourmet meals? It’s all that and more.

The YO’s founder, Captain Charles Schreiner, defied labels, too. A German immigrant, Schreiner became a Texas Ranger at age 16 and eventually built a mercantile and banking empire in Kerrville. By 1880, he had amassed 550,000 acres after driving 300,000 Longhorns to market. Keeping faith with its ranching heritage, today’s YO maintains one of the nation’s largest herds of quality Longhorns. Charlie Schreiner III, the captain’s grandson, once observed, “Without the rangy breed, there wouldn’t have been a YO.”

The YO hosts Longhorn roundups for trail riders each spring and fall, as well as Longhorn and exotic-wildlife  auctions twice a year. The ranch acquired its first exotics in the 1950s and now harbors more than 50 species, including aoudad sheep, axis deer, blackbuck antelope, ibex, oryx, ostrich, red deer, and wildebeest.

The YO’s tourism director, Debbie Hagebusch, who leads wildlife tours and photo safaris, explains that game ranches like the YO can contribute to preserving some endangered species like blackbuck antelope from India.

Joining Debbie on a tour, I saw Longhorns galore, cuddled up to a camel, and fed cookies to a giraffe. That night I dined on beef tenderloin at the YO’s Chuckwagon and hiked back to my logcabin room by starlight. Now that’s living the legend.

‘One of the nice things about the ranch is that you can park your car and not have to start it again until it’s time to go home.’ – David Mangold, Silver Spur wrangler

Prude Ranch, near Fort Davis
“We’ll Keep a Horse Saddled for You.”

I’ve stayed at the Prude so many times over the years, it’s like my second home out west. Among my fondest Prude memories: meeting Larry McMurtry at a writer’s retreat, going back for seconds at the Prude’s hearty Thanksgiving feasts, hiking and collecting rocks in the surrounding Davis Mountains, and watching my young daughter ride a horse for the first time.

Many thousands of Prude fans share similar memories of what may be Texas’ oldest continuously operating guest ranch. Established in 1897 along the banks of Limpia Creek near Fort Davis, the Prude cattle ranch first took on paying guests in 1921. They came to the mile-high ranch to escape the summer heat and enjoy rodeos, square dancing, and cowboy singing.

The 1,300-acre ranch still runs cattle and keeps Longhorns and bison around as “pasture ornaments.” Prude Ranch manager Bruce Davis adds, “It’s still very much a cowboy place, but we do a lot more.” Star parties, fitness/sports medicine camps, bicycling events, RV rallies, and fellowship retreats keep Prude guests on the move during every season of the year.

Even though the trails across Texas are not as long and lonesome as they once were, it’s good to know you can take advantage of the opportunity to saddle up and get the feel of life on horseback. And still be close to a hot meal and a cozy bed.