The 64-mile trail system crosses 46 bridges and rolls over farms and brushy ranchlands, passes through Clarity Tunnel, and follows Quitaque Canyon before climbing up and over the Caprock Escarpment 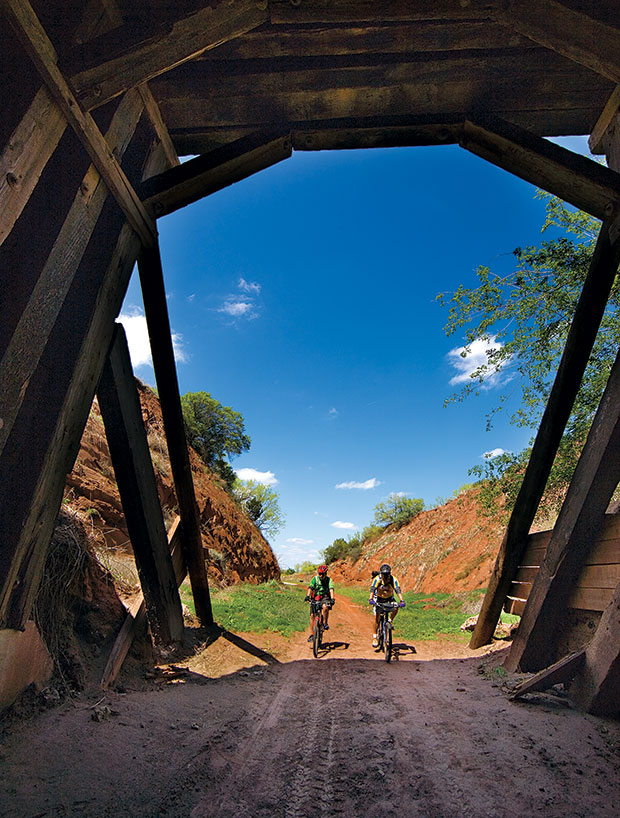 Travelers on the Caprock Canyons Trailway sometimes feel they’ve tipped time’s arrow on its head. Following the path of an abandoned rail line, the 64-mile trail system takes hikers, cyclists, and equestrians across the region’s halcyon backyard, into the agrarian plains and broken rangeland of caprock country, and out of this century completely.

Railcars once clattered across tracks on this pastoral route—passing through the rural communities of South Plains, Quitaque, Turkey, and Estelline—enabling area farmers to ship their products and reap the benefits of bigger markets farther north. A Panhandle detour for the Burlington Northern Railroad, the branch line of the Fort Worth and Denver South Plains Railway was completed in 1928 and served this slice of the Panhandle for six decades, until Burlington closed it in 1989.

Three years later, the Rails-to-Trails Conservancy, a nonprofit dedicated to transforming abandoned railway lines into a nationwide network of trails, removed the steel rails and wooden ties and resurrected the remaining berm as a hiking, biking, and equestrian trail. Once the Trailway was completed, the organization turned it over to Caprock Canyons State Park.

Divided into six trail sections from five to 17 miles in length, the Trailway has eight trailheads, or beginning points, accessible from farm-to-market roads and state highways, allowing explorers to tackle the Trailway piecemeal or traverse it all in one trip by caching water and supplies at trailhead locations and camping along the way. The Trailway crosses 46 bridges and rolls over farms and brushy ranchlands, passes through Clarity Tunnel, and follows Quitaque Canyon before climbing up and over the Caprock Escarpment on a 7 percent grade.

The entire Panhandle region once served as a migratory byway for the vast bison herds that roamed the Great Plains.

Trailway adventures begin three miles north of Quitaque, at Caprock Canyons State Park, where you can pick up the permit required to use the Trailway, as well as maps and information. While there, you might get lucky and catch Doris Mager, a raptor specialist and the head of S.O.A.R. Inc. (Save Our American Raptors), giving
a presentation in the park’s outdoor pavilion.

Mager’s organization is dedicated to the welfare of North America’s birds of prey, and she travels the country with rescued owls, falcons, and hawks, spreading the word about the important role these stunning birds play in our ecosystem. Mager’s presentations provide a rare opportunity to witness some of these handsome birds up close, including her great horned owl, “E.T.,” a member of one raptor species that you might see along the Trailway at dusk. Look for the round head and telltale ear tufts silhouetted against the evening sky. Mager’s friendly screech owl, “Impy-Tex,” represents another common nighttime species along the Trailway; listen for its soft tremolo call. The screech owl is also an excellent mimic, and should there be other critters around making noises, you might hear a screech owl’s hilarious imitation. The owl’s large, candle-flame eyes and squat body on stick legs add to its comical character. Mager’s “Cherokee,” an American kestrel, represents a common daytime sighting on the Trailway. This petite falcon with striking, Aztec-like markings can be seen perched on dead snags or diving at unsuspecting insects.

Before selecting a trailhead and leaving the park, be sure to look for the resident bison herd. The entire Panhandle region once served as a migratory byway for the vast bison herds that roamed the Great Plains, and the park’s bison, considered the official “Texas State Bison Herd,” preserve genetics of bison rescued by ranching legend Charles Goodnight. The Goodnight herd was one of only five foundation herds that saved the bison from extinction. The wooly beasts, numbering less than a hundred, roam the 1,000 acres near the park entrance, lumbering across pastures in the far eastern section of the park almost daily before crossing the main park road to graze. This slow-moving caravan of horns and husky shag provides a great opportunity to view the native critters up close and from the safety of your vehicle. Take plenty of pictures, but don’t feed the bison, and, above all, don’t get out of your car. These wild South Plains bison are more likely to charge than flee
when approached. 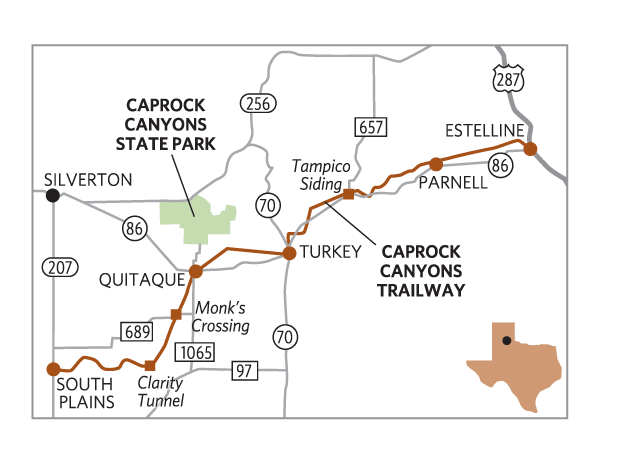 Although the Trailway relies on the state park for administration and upkeep, its route doesn’t actually intersect the park. Instead, you must exit the park and travel south about three-and-a-half miles back to Quitaque (pronounced “kitty-quay” or “kitt-a-quay”) to access the Quitaque Depot trailhead or follow Texas 86 east or west or FM 1065 south to access the other trailheads.

The most popular means of traveling the trailway is via mountain bike. The 64-mile berm is flat and wide, its grades mod-erate, and most segments are easy to negotiate. A favorite cycling adventure begins at the South Plains terminal, the westernmost trailhead, and ends at Quitaque. This 22-mile, downhill stretch includes the Quitaque Canyon Trail, Clarity Tunnel, and the Los Lingos Trail, providing an ideal sampling of Trailway environments from rugged canyonlands to pastoral plains. Get an early-morning start, and begin alongside the Marble Brothers Farm Gin, a silver conglomerate of sheds, towers, and ramps above the skyline in a region where cotton once reigned as king. The Trailway runs alongside plowed fields, where small, leafy shelterbelts border the crop rows, providing shade and windbreaks for rests and snacks between pedaling. The limitations of the High Plains landscape in the face of the area’s propensity for spawning tornados and windstorms is evident—utility poles and pitched shed roofs provide the only interruption in a vast, flat-lining horizon.

Soon, however, the Trailway begins to drop, breaking through the eastern ledge of the Caprock Escarpment, an eroding edge that was created during the last Ice Age and now runs 200 miles north to south, from Amarillo to Big Spring. As you descend into Quitaque Canyon, the Trailway passes between deep, vertical pathways carved by railroad construction crews to accommodate the declining grade. The cuts expose the uppermost layer of the Ogallala formation laid down between four and 10 million years ago.

A favorite cycling adventure begins at the South Plains terminal, the westernmost trailhead, and ends at Quitaque.

As you ride, watch for mountain mahogany, sumac, wild plum, and Texas basketflower, all of which leaf, bloom, and bear fruit amid the canyon’s creeks and gullies. Ephemeral wetlands form after rains and provide feeding grounds and habitat for owls and migratory songbirds. Soon, Emerson Creek Bridge appears, the highest trestle along the Trailway at 60 feet above the creek bottom. The bridge is your signal to watch for the mouth of Clarity Tunnel just a few miles down the trail.

The 582-foot tunnel, listed in the National Register of Historic Places, curves through the caprock hillside in a gentle turn to the northeast. As you enter, you might experience some slight vertigo at the tunnel’s dark center, just as daylight disappears behind you and before the sunlit exit appears. This midway point is also home to thousands of Mexican free-tailed bats between April and October. Their mostly dry guano (although mucky in spots) covers the tunnel floor, so move quickly and quietly through the tunnel. Avoid disturbing the bats. If you want to see them, but aren’t up to traversing the Trailway, the park offers an interpretive bat-flight observation on scheduled nights that includes transport to and from a site near the tunnel. The program provides an opportunity to watch thousands of the tiny mammals exit the tunnel in a spiraling mass to spend the night feeding on flying insects.

Once out of the tunnel, you’ll leave Quitaque Canyon behind, traveling across rangeland northward to Monk’s Crossing, where FM 689 intersects the Trailway. Your trek may end here if you’ve arranged transportation, or you can continue north on the Los Lingos Trail for the final five miles into Quitaque. Soon, you’ll cross the concrete Los Lingos Creek bridge, the longest trestle on the Trailway. Not long after your crossing, you’ll begin to see Quitaque in the distance.

Few buildings other than water towers and cotton gins rise above a single story in the communities along the Trailway route. Quitaque’s water tower, looking like an oil can on spider-stilt legs, is the first to break the bird’s-egg-blue horizon. Furrows of alfalfa follow, giving way to modest clapboards, rose gardens, and friendly horses grazing in big backyards. If you’ve planned for your Trailway adventure to terminate here, then you’ve come to the right place. Charles Goodnight, who owned the nearby Lazy F Ranch, gave this quiet, provincial community its name in 1880, a word he understood to mean “the end of the trail.”

“Mountain biking the Caprock Canyons Trailway is one of my all-time favorite Texas adventures,” says E. Dan Klepper. “I love the way it rolls easy and breezy through so much tranquil countryside.”