As Drought Sets in Across Texas, Expect a Bumpy Tubing Season

From the Frio to the Comal rivers, the popular recreational activity stays afloat

Written by Natalie Moore | Updated: August 1, 2022 | Filed Under: On the WaterRiversTravel News 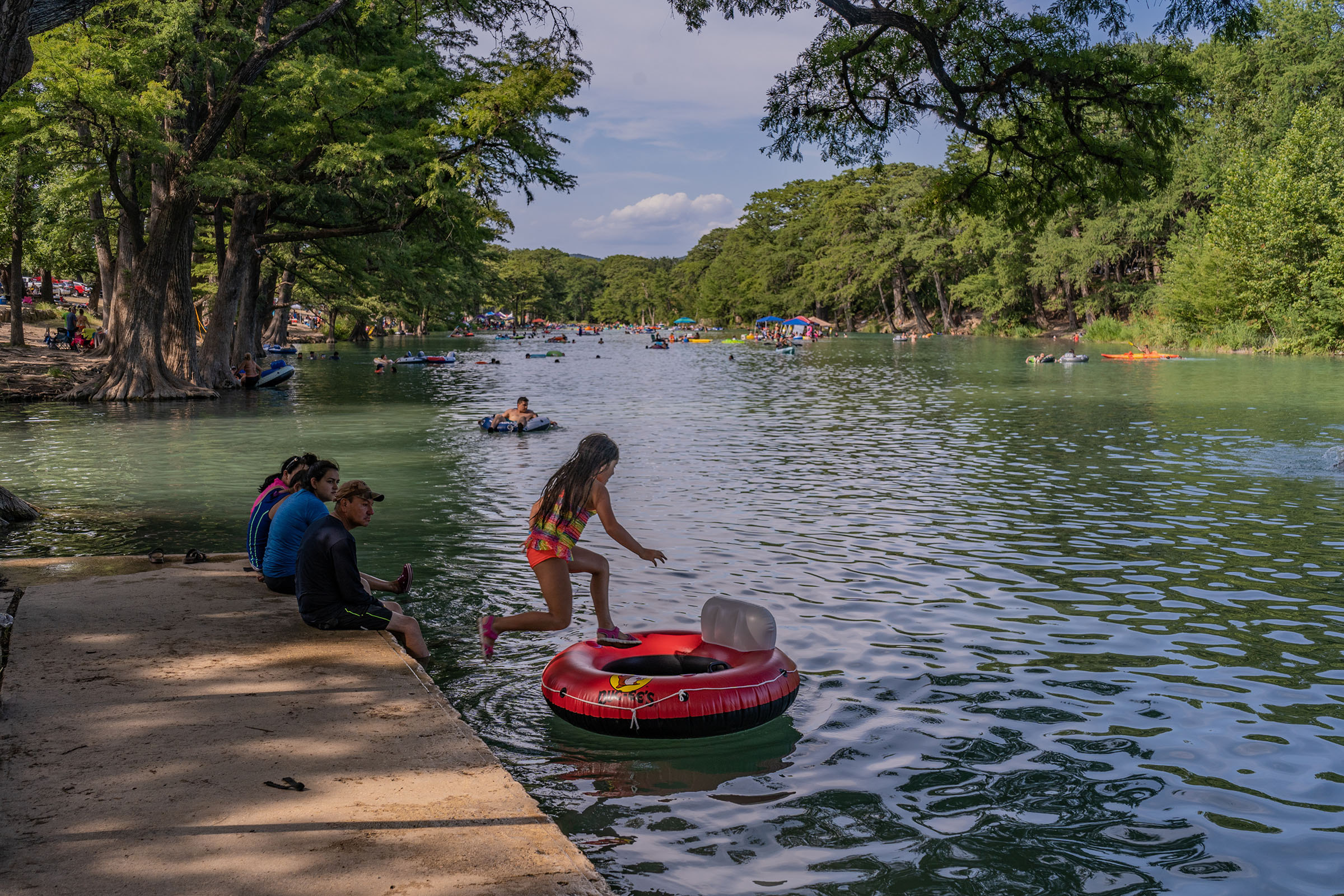 Tubing on the Frio in 2019. Photo credit Will van Overbeek.

What’s not to love about tubing the river? Hot sun and cold water, fun with friends, and time spent outdoors—plus a brutal sunburn if you’re unlucky. It’s a classic summer pastime in Texas for a reason. But in 2022, your float trip down the river might look a little different.

While Texas summers are rarely temperate, regions across the state have been dealing with an exceptional pattern of record-breaking temperatures and minimal rainfall. Flows in portions of the Frio, Pedernales, Guadalupe, and Nueces rivers have slowed to a trickle, while others that are flowing, such as the San Marcos and Comal rivers, have experienced significant drops in their flow rate due to the drought. Even some spring-fed swimming holes such as Jacob’s Well have stopped flowing.

Some of these conditions can be attributed to the current La Niña weather pattern, but this season’s weather is irregular, says Robert Mace, executive director of the Meadows Center for Water and the Environment. “Many of our streams and rivers, particularly in the Hill Country area, are fed by springs which in turn are fed by aquifers,” he says. “With a lack of rainfall, the higher temperatures, we’re not seeing as much water replenishing these aquifers.”

The drought has affected most of the state, with some areas classified by the U.S. Drought Monitor as a 4—the highest rating available. Mace expects to see dry conditions continue through the fall and into early winter, which means low flows will also continue. “There’s the lack of rain that most Texans have experienced, and even for the rain we have gotten, the ground is so dry from being baked by the hot sun that it takes a lot of rain to fully saturate the soil and allow for water to run off into streams,” he explains.

This means that many of Texas’ popular tubing rivers are significantly lower and slower than previous years. According to provisional data from the U.S. Geological Survey, the Frio first dropped to 0 cubic feet per second (cfs) on June 22, and is currently maintaining that level after a brief spike after a rainstorm on July 3. This is the lowest measurement for the river since 2011 and means that the river has essentially no flow.

Meanwhile, the Nueces flows are as fast as 10 cfs, while the Guadalupe’s are at 6 cfs. As for the San Marcos and Comal rivers, they are still going strong at roughly 93 and 50 cfs respectively—though these numbers are a significant drop from historical flows.

Mace notes that due to the presence of endangered species at Comal and San Marcos springs, restrictions on utility water use kick in once flows dip below 120 cfs, with additional requirements in place below 80 cfs. As of June 20, the city of New Braunfels is under Stage 3 drought restrictions to protect Comal Springs.

Though this summer might look a little different than previous ones, businesses along the Frio and other rivers are adapting to the conditions. Josh Shandley, owner of Josh’s Frio River Outfitters, is confident that visitors can still enjoy the river in low flow. “The Frio River is not always high, but it’s always fun,” he says.

In addition to tubes and kayaks, Josh’s supplies bait, fishing, and camping gear, so there’s plenty of outdoor activities to enjoy—plus they have souvenirs, coffee, gelato, and soft serve ice cream for visitors.

During low flow, Shandley suggests visitors try out fishing or venture to one of the Frio’s deeper swimming holes instead of floating. Josh’s is not currently providing shuttles to the river, but Shandley plans to keep doors open regardless of river flow. “We have learned to take the good years with the bad and know that there is always a thunderstorm headed our way,” he says.

Enjoy the season despite the drought with these tubing outfitters

As you take to the water this summer, make sure to check official recommendations for the river or swimming hole you’ll be visiting. The recent data on rivers, streams, and lakes across the state is available to the public through the National Water Information System, and many tubing companies share the current flow for their respective river on their website. Check with the tubing company you’ll be visiting to make sure they’re still operating and find out how the river’s riding, such as if walking between flows is expected.

Once you get there, make sure to be mindful of your surroundings and respectful of the environment. According to Mace, visitors to rivers and lakes have a greater impact on the environment during periods of low water flow. He advises using the river’s established access points, refraining from pulling up or trampling established plant life, and being aware of your actions. “We can certainly enjoy the river in a way that honors the species that also rely on that river, as well as the river itself,” he says.

If you feel like taking a shorter soak in the river, use your extra time to check out all that riverside towns have to offer. “We want you to see it like a local,” says Shandley. See one of Texas’ official mammals in its natural habitat at Frio Bat Flight Tours in Concan, fuel up on Tex-Mex at Mama Chole’s in Leakey, or catch a show at the Whitewater Amphitheater on the Guadalupe. And as always, stay cool and have fun.