Hummingbirds know how to draw a crowd with their intense colors and high-speed antics. 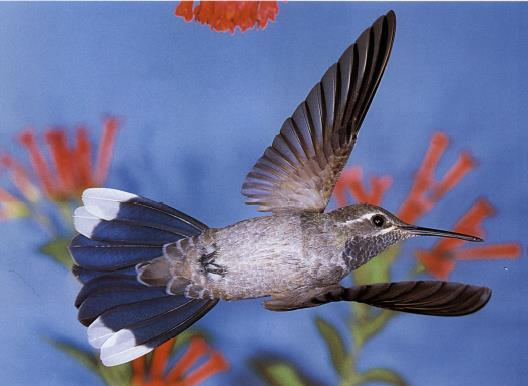 This male Blue-throated Hummingbird is able to depart quickly by making a horizontal flying maneuver. Note that the feathers on his throat appear silvery and scaled. Photograph by Sid and Shirley Rucker

Hummingbirds are among the most fascinating creatures in the natural world. Although some other species of birds are able to hover, none do it with the masterful ability of a hummingbird. The hummingbird’s ability to fly backward is unique among birds. Combine their aerobatic prowess with their endearing behavior of visiting our back porches and gardens and you have a combination that has captured the hearts of birders and non-birders alike. So popular
has the hummingbird become that the hummingbird-feeder industry has grown exponentially across the United States.

There are clubs devoted to hummingbirds, state programs developed to keep track of hummingbirds and the people who feed them, and entire festivals that draw thousands of participants to learn about these magnificent flying jewels. Our thirst for knowledge about these creatures seems to be never-ending.

Texas has one of the greatest hummingbird populations and diversity in North America. Observers flock to West Texas annually to see the kaleidoscope of colors and patterns displayed by the numerous species that pass through each year. For many years, Arizona was considered the “hot spot” in the United
States for hummingbirds, but recent years have shown that West Texas in general and the Davis Mountains in particular have offered a challenge to this title.

I have had the pleasure of sitting in a private yard in the Davis Mountains and watching literally a hundred or more hummingbirds of six or more species in view at once! Scenes such as this are never to be forgotten and highlight the magical allure of hummingbirds and our desire to learn more about them.

—Greg W. Lasley (from the Foreword)

Texas is well known for its large concentrations of birds, butterflies, Mexican free-tailed bats, and more, and a lot of travelers come to see them. Spring and fall bird migrations are phenomenal, with great birding spectacles occurring throughout the state. Most notable are the migrations of warblers and shorebirds and the great congregations of waterfowl and raptors. But a wildlife spectacle in miniature has captured the fascination of many people who ordinarily would not consider  themselves birdwatchers. The Ruby-throated Hummingbird delivers an economic punch to a community on the central Texas coast in an otherwise ordinarily slow tourist season and also brings pleasure and delight to thousands of people who show up to watch.

One of Texas’ most amazing avian spectacles is the annual staging of Ruby-throated Hummingbirds on the Coastal Bend of Texas near Rockport and Fulton. It is so impressive and unique that an annual festival was developed around the phenomenon in 1988, when the community noticed the annual occurrence of great numbers of birds and decided that their Ruby-throated Hummingbirds were worth showing off. Although not as readily visible as larger birds in migration, the Ruby-throated migration is just as spectacular in many ways, especially in the birds’ great numbers.

It all begins around the first week of September, when hummingbirds start showing up along the Texas Gulf Coast from points north and east. This historic
staging area becomes the stopping place for the nation’s largest concentration of Ruby-throated Hummingbirds as they prepare for their southern migratory passage. The birds congregate here and fatten up on nectar and protein before departing for the tropics, flying over or around the Gulf of Mexico to points south, mainly central and southern Mexico. For several weeks, birds by the thousands congregate in oak woodlands and backyards in a migratory hiatus and feeding frenzy. Wild Turk’s cap, salvia, and other nectar-producing plants supply natural food for many, but others feed on nectar provided in town in colorful backyard feeders.

Enjoying these annual passages, a group of ardent town residents saw an opportunity and took it to heart. They already had birds in their backyards by
the hundreds, and to attract even more, in late August they hung additional feeders, with some yards boasting up to 25. Then these citizens planned the
Hummer/Bird Celebration, a community-sponsored festival to take place in mid-September in celebration of the birds’ arrival. They invited people from
around the area, and tourists showed up by the thousands.

The festival features a trade show with so much bird paraphernalia that an avid shopper could stay busy all day on a buying spree. Bird experts conduct popular educational programs, covering topics such as bird biology and bird gardening. These programs coincide with birding tours for a complete birding experience. But the main show is the backyard tours where festival-goers enjoy the spectacle of hundreds of birds in one spot, buzzing and feeding commune-style at backyard feeders. Reports sometimes include Buff-bellied or Rufous Hummingbirds in addition to the Ruby-throated, but the Ruby-throated is the real star because there are so many of them.

No one knows how long the birds have been staging here along the coast, but the phenomenon has only recently been recorded. Ornithologists speculate
that the birds congregate in this area because of its proximity to the Gulf and because of the live oak trees that grow on the coast in clumps, called mottes.
These wind-twisted trees accommodate the birds’ needs for cover, and the natural populations of Turk’s cap and other nectaring flowers provide the necessary natural food. As they are everywhere, conservationists here are concerned that human growth and development could destroy these historic roosting and staging grounds. The migration spectacle and Hummer/Bird Celebration are well worth a special trip to Rockport.

Several large Texas ranches are pioneering by opening their gates to paying birdwatchers. The King Ranch, Kenedy Ranch, El Canelo Ranch, and Fennessey Ranch, all located on the Gulf Coast or in South Texas, are now open for birding tours, which has helped the owners add new revenue to their ranch income. In the past, bird-tour operators would spend hours along a few spots on South Texas highways, hoping to call or hear birds, which were hard to find. With ranch tours on the menu, operators can give their clients a great South Texas birding experience.

When Dan Brown called the Hummingbird Roundup staff in 1994 and told them that he had used over 350 pounds of sugar for feeding hummingbirds during the previous five-or-so month hummingbird season, they scratched their heads in disbelief. That is more than two pounds of sugar per day during the hummingbird season, the greatest amount they had heard of anyone feeding. Brown also told them that the birds drained sixteen feeders daily and that he had hundreds of hummingbirds all summer. The amazed staff called back to make an appointment; they wanted to see firsthand.

What they witnessed was not only a marvel of nature but perhaps the most wonderful habitat anywhere for breeding Black-chinned Hummingbirds. From Austin they drove northwest about three hours to the small town of Christoval, south of San Angelo. There they found a wonderfully peaceful and beautiful environment and a man who obviously derived great pleasure from wildlife and birds. His family heritage included this beautiful West Texas ranch set along the banks of the South Concho River, a place that hummingbirds, if they could talk, might call Nirvana.

The setting was serene as the clear South Concho River meandered through thick groves of native pecan trees with shallow rivulets of water flowing effortlessly on top of the white limestone bottom. The sun was filtered through the deep shade, laying down golden light on the water and revealing a wealth of busy insects darting among wildflowers, low shrubs, and rocks. Small fish and water bugs scurried along. The tree canopy, about thirty feet above the water, provided just the right light for shade-loving species, such as American beautyberry and other plants. Painted Buntings and Northern Cardinals were singing in the trees, while resident white-tailed deer and wild turkey looked like sentinels guarding the ranch. This place is special just for its natural beauty alone, but it was also special because of its thousands of tiny bird inhabitants. This was the summer home to perhaps the largest concentration of breeding Black-chinned Hummingbirds in Texas or, perhaps, the world.